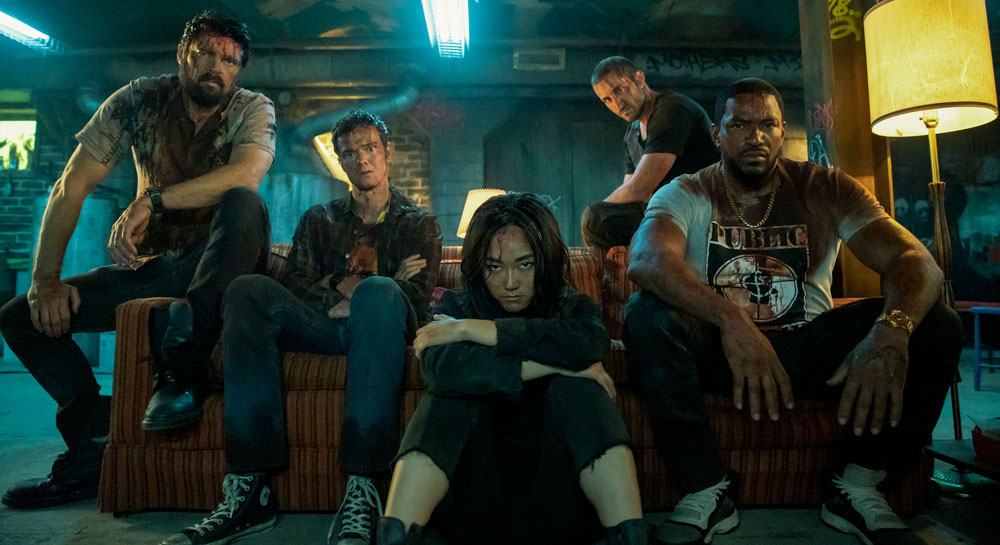 Spoiler Warning: The following contains spoilers from the first 3 episodes of Amazon’s The Boys.

From the jump, Amazon Prime’s vicious action-satire faced an uphill battle. Based on a fairly loathsome and retrograde comic series by Garth Ennis and Darick Robertson, most assumed — myself included — that the show was destined to be an empty edge-lord approximation of the source, albeit with a great cast. I was absolutely thrilled when Erik Kripke’s first season showed a ton of heart and a lot of brains, roasting American corporate culture and the “superhero boom.” After finishing the second season, I can assert that the first season walked so this season could run. Across the entirety of the season, you’ll see a show and cast with renewed vigor for tearing the throat out of the corporatization of pop culture, the privatization of public works, abuse and toxic masculinity, and the empty gesticulation by our monopolistic overlords toward social justice.

But I’m here to talk about the first 3 episodes, for now. Kicking off with “The Big Ride,” S2 drops us back into the story shortly after Homelander (Anthony Starr) whisked Billy Butcher (Karl Urban, as engaging and devilish as ever) off to a secret compound and revealed that his wife Becca (Shantel VanSanten) is alive, and has a young son with Homelander. Hughie, Frenchie, Kimiko, and Mother’s Milk are living underground with an assortment of Frenchie’s less savory connections, all wanted fugitives after Butcher’s destruction of Madelyn Stillwell’s home branded the collective as terrorists. Hughie (Jack Quaid) is trying desperately to balance his clandestine affair with Starlight (Erin Moriarty) with his desire to help lead the eponymous Boys to vindication or freedom. The crew is ragged and pressed, and clearly adrift without Butcher, a fact that rankles Hughie to no end given he feels totally betrayed by Butcher’s callous disregard for life. Meanwhile, The Deep (Chace Crawford) is bottoming out in exile in Sandusky, and being courted by a super-archer with ties to a shady church.

In the midst of all of this, Hughie and Starlight are hatching a plan to expose the megacorp Vought, and their experimentation on humans with Compound V, the solution that creates the Supes that now execute military actions while their more famous predecessors, The Seven, preen and star in blockbusters stateside. The Boys is going hard on corporate media integration and messaging. The cultural fetishization of superheroes is just the jumping-off point. Like a regenerative supe prostituting himself for people who take him apart, it’s on the nose. But what’s most impressive is the way this show doubles down on the clowning of self-important superhero mythos in our culture with real purpose. Rather than sit back and expect us to applaud when a filmmaker yells “HANS ZIMMER” to punctuate his rote, hacky work on his Batman V Superman: Dawn of Justice riff, it still pushes to give our characters, including the despicable Seven, real pathos. Homelander may be a shark in a person-suit, but he’s also a pathetic, narcissistic sadist, hungry for the love and admiration that his PR/Marketing teams are selling. The Deep is a despicable clown, but watching God’s Dumbest Asshole trip on mushrooms and join a Scientology-like cult after reconciling with his own gills (played by Patton Oswalt) is thrillingly absurd. Across all three of these three episodes, we see people of all affiliations in a constantly moving collection of loyalties and flaws, that nevertheless resolve themselves into the beating hearts of the characters. There are no long stretches of wallowing or wheel-spinning. The urgency isn’t oppressive, but it’s ever-present. Characters don’t make stupid decisions in order to create a false sense of dramatic stakes, but rather because by now their characters are richly established enough that the natural tension of this high-stakes (if ridiculous) scenario means every choice is going to create a set of consequences that they’ll have to cope with. When a super-terrorist smuggled into the city by Frenchie’s (Tomer Kapon) criminal contacts is discovered to be Kimiko’s long-lost brother Kenji — under the auspices of a terrorist group — the team sees an opportunity to leverage his capture into clearing their names. While Hughie’s natural inclination is to do everything he can to bring him in alive, Butcher’s approach is decidedly more pragmatic and nasty. So when Hughie saves Kenji’s life, causing serious damage to a Party City, the rift between Butcher and Hughie explodes, and the team’s tenuous grasp on vindication unravels completely.

This is where season 2 of The Boys really begins to cash the checks written in the first season. I can see a version of this show where the parallel stories of the Seven and the Boys are broadly sketched with blood and dark humor, with clear delineations of heroism and villainy at the surface level. But the super power of The Boys is that it refuses to waste this incredible cast on facile writing. The conflict between Butcher and Hughie is fraught and intensely personal, but it isn’t tedious or childish. Jack Quaid and Karl Urban continue to bring a messy humanity to their roles, crossing a spectrum of admiration, brotherly annoyance, regret, jealousy, and love between these two characters and their team. Butcher is justified in wanting to do whatever it takes to get back to his stolen wife, just as Hughie is justified in fearing that the actions of the team are beginning to be indistinguishable from the wanton cruelty and destruction of the Seven. Within these 3 episodes, no moment makes this so crystal clear as when The Deep, emerging from exile in Sandusky where he’s fallen under the spell of Scientolog… er… The Collective, attempts to stop the team fleeing with Kenji into the drainage system by calling upon a whale named Lucy to block their path, only for Butcher to ram the speedboat right through Lucy’s midsection. It’s a moment that proves 2 things; 1) this show hates aquatic life worse than Mike Flanagan hates hands, and 2) for all of the mirthful groaning that this show creates in moments of excess, characters like Hughie are legitimately disturbed by that excess, as Hughie nearly decides to pack it in and simply wait for the authorities while ensconced in Lucy’s guts. At that moment, he’d likely rather wait for the Seven to arrive and murder him than continue following Butcher down this bloody road.

Speaking of the Seven, their ranks have been bolstered this season by a new member; An irreverent snark hailing from Portland by the name of Stormfront (Aya Cash). Amidst the ongoing chaos of A-Train’s (Jesse T. Usher) heart issues, Queen Maeve (Dominique McElligott) hiding her same-sex relationship, and Homelander’s continuous unraveling into neediness and murder, Starlight finds herself in the crosshairs from several angles, as she enacts the plot concocted with Hughie to release information about Compound V1 to the media in order to expose the Vought Corporation. The way the show handles Stormfront in these first three episodes is great, as we’re introduced to her as a character who shows the fortitude to challenge the status quo at Vought, openly criticizing their sexist media output and hollow corporate platitudes. At first, it seems as if the outspoken and forceful Stormfront could be an ally to Starlight. In a moment where the Seven and Vought are exposed by the actions of Starlight, Homelander delivers a moment of leadership that mirrors those of Captain America in Captain America: The Winter Soldier, telling executive Stan Edgar (Giancarlo Esposito) that the Seven are a family in which Edgar is an outsider, and that they will catch the ‘supervillain’ Kenji as a group, which visibly impresses Stormfront. Moments like this set up the idea of Stormfront as a rogue Wolverine-style anti-hero, but by the end of episode 3 (“Over the Hill with the Swords of a Thousand Men”), she is exposed as a cruel victim-blamer and virulent racist and murderer, who massacres an entire housing block peopled by Black and minority families before brutally killing Kenji.

I can’t get into specifics on just where these stories go at the moment, but for now let me assure you that the remainder of season 2 takes these characters on a real journey, never shying away from the nastiness of the themes presented. Especially now, while racism is being regularly exposed in our institutions like law enforcement, we’re seeing new media unafraid to engage with the reality of our times in interesting ways. Unlike HBO’s Watchmen, this show is taking the empty social posturing of the corporate media to task. The vultures feeding on social movements. What Watchmen has to say about race in America so eloquently, this show sneers out in rage-fueled drunken tirades as given and unacceptably accepted. It isn’t Watchmen. It isn’t healing anything. The Boys is an angry and derisive sneer at empty public posturing that echoes the pain of the moment with a vested interest in doing absolutely nothing about it.

Buckle up, because this is going to be a hell of a ride. I’ll be back every week to discuss new episodes as they drop!