Review: THE CHILLING ADVENTURES OF SABRINA, “Chapter One: October Country” and “Chapter Two: The Dark Baptism” 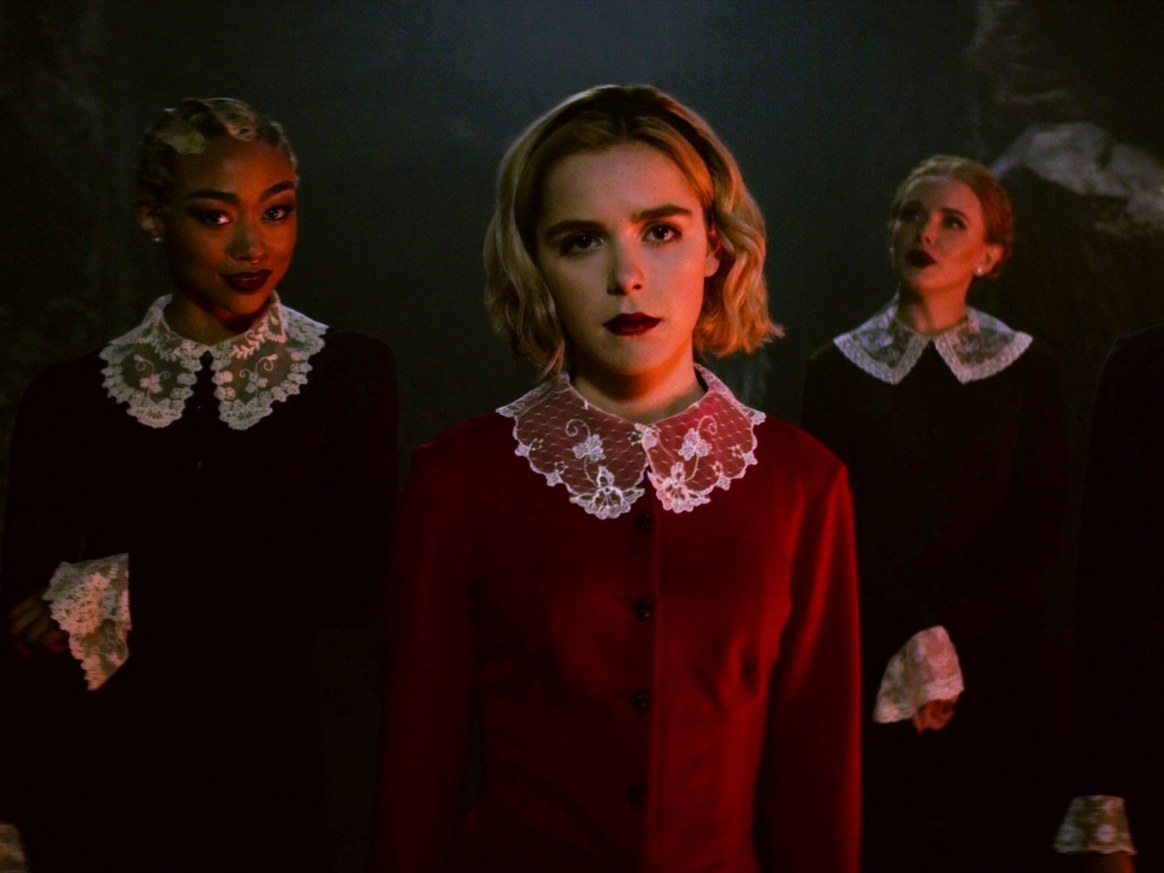 I’m gonna be straight with you, Bus riders. It’s been a rough time, and the patriarchy has only been ramping up. With the endless sexual assault and harassment allegations and accusations, the lines of men forming to vilify and denigrate women for speaking up, and these same men seemingly facing no repercussions at all…it’s all been, as they say, A LOT.

Entertainment has only been a mild respite because lurking under all the joy and fantasy and escapism is the truth that we can’t really hide from the terrors of inequality, not in the deep, dark woods and not even if you’re a witch – but there’s some hope, as long as you hold onto your wits and keep the Dark Lord at bay.

In the Chilling Adventures of Sabrina, the new show in the Archie comics universe now streaming on Netflix, Sabrina Spellman (Kiernan Shipka) is a half-witch who is about to turn 16. When she does, she’ll undergo the dark baptism and commit her body and spirit to service of the Dark Lord in exchange for powers she can only imagine, ones she’ll learn at the Academy of the Unseen Arts. Her father did it, her aunts did it, her cousin did it – but Sabrina isn’t sure she wants to do it, for a variety of reasons. Sure, she’s sad about leaving her regular, mortal friends, especially Harvey (Ross Lynch), her boyfriend. But she’s also uncertain about the whole “give yourself over to the Dark Lord” part of the deal. Sabrina’s not interested in giving up her freedom, and she’s not convinced that the power is worth it.

Sabrina is a gorgeous show, and it feels lived in. The words “the Path of Night” and “Demonomicon” just roll of Kiernan Shipka’s lips like she’s said them a thousand times, and it really helps give this show weight, like it’s something that’s been going on and we’ve just been given a glimpse. Characters named Prudence, Dorcas,1 and Agatha (collectively known as the Weird Sisters) are perfectly suited to this universe because just like in Riverdale, everyone looks like they’re from the 1950s even though the shows are clearly taking place in modern day.2 It’s a wonderful aesthetic that allows the show to use bright and retro colors in its interior sets, the moody woods of the Pacific Northwest, and the luxurious red that is clearly Sabrina’s color motif.

As Sabrina, Kiernan Shipka has a tough job. Sabrina is kind and loyal, and we believe that Sabrina is a good person, and we want to root for her because we need some kindness in our lives, too. Shipka plays Sabrina so openly that it’s impossible to dislike her; not because she’s perfect, but because she so clearly cares about everyone in her life that you feel a righteous anger alongside her whenever she’s been slighted. It becomes evident, too, that when Sabrina feels slighted, all hell breaks loose. As we see in the first episode, it’s usually when someone threatens her friends. Shipka seems to throw Sabrina into another gear in those scenes, showing a bit of inner snarl. She’s dynamic to watch.

Her best friend, Roz, is played by Jaz Sinclair. Roz doesn’t have a ton going for her at the moment, other than being Sabrina’s best friend, but she’s quickly established as a smart and resourceful woman and she protects Susie, who is bullied by four skeevy football players for exploring gender fluidity, with as much fervor as Sabrina. What’s really clever about the way Roz and Sabrina are written is that at no point does this episode tell us that Sabrina is better than Roz, even though her witch life is far more interesting than her mortal one. Roz protects Susie in her own way, just as Sabrina uses her witch powers. It’s about women supporting women with the tools at their disposal, as Roz emphasizes when she and Sabrina start planning their support group. I hope Sinclair gets more to do in future episodes.

Sabrina handles Susie’s storyline delicately, but something still feels a little off. It’s extremely satisfying to see Sabrina and the Weird Sisters go after those four Brett Kavanaughs, and this is a real high point of the episode because of how creepy it gets (the Weird Sisters’ skull faces are just downright scary). But by nature of the show being called Sabrina, it’s not quite centered on Susie’s self-defense and self-actualization. Susie wants to stick up for herself and is actually itching to, but even if Sabrina has dispatched these four from her life there will be others. Susie has to figure this out for herself. It’s only one episode, though. I hope the rest of the season puts Susie at the center of her own hero’s journey.

Susie is played by a non-binary actor, Lachlan Watson, who imbues Susie with warmth, and a resolve to get past the bigotry. Though we don’t know much about Susie’s home life, she’s got some real ride-or-die friends in Sabrina, Roz, and Harvey. In the first episode, Watson gets some emotional beats to sink their teeth into. Inevitably, the show will draw comparisons to Buffy the Vampire Slayer (and it is a worthy successor so far). I loved the Scoobies, but they never had to defend a non-binary friend from bullies and monsters and often, the monsters were more terrifying. Here, in the day-to-day, we see the trauma of bullying rooted in a young person’s face. It’s partly because Buffy was rooted in its own time, where those conversations weren’t happening in the open as they are now, but it’s also what sets Sabrina apart as being such a modern show.

Ross Lynch plays Harvey with a dopey charm and an easygoing spirit. He’s in the dark when it comes to Sabrina’s witch life, and her one attempt at telling him the truth results in complete confusion for him and anguish for her. She takes away his memories of their conversation and commits to just loving him for however long they have together before her dark baptism whisks her away from the mortal world. The tragedy is that Harvey thinks that’s going to be a nice, long time. Lynch gives Harvey these big, brown eyes that are just filled with innocence and potential. In many ways, Harvey’s the classic small town guy trope. He’s stuck in a small town and his brother and father are in dead-end jobs as coal miners. Ambrose cracks that that may be his future, too. I have confidence Harvey will be just fine. He’s smart and talented, plus, he has the patriarchy on his side. Has a coal miner/comic book artist ever become Supreme Court Justice? The bar is so low nowadays.

Harvey is what makes Sabrina’s impending baptism and departure more wrenching for her, because she loves him – and while I was watching, it struck me that they reminded me of Buffy and Angel. These two just feel like they’re having a romance for the ages, even though they’re only 16. There’s an immediacy and to their time together, and only one of them is aware of it. Lynch and Shipka have really great chemistry and they give their relationship that weight that is required for us to care about her mortal life. You hate to see a nice guy like Harvey caught in the crossfire between Sabrina’s mortal and witching worlds, but I suspect that if the Dark Lord ever went after Harvey, he’d have hell to pay.

Now, I really have to talk about two other members of the Spellman triumvirate. Zelda and Hilda, Sabrina’s aunts, are spectacular. Miranda Otto and Lucy Davis, as Zelda and Hilda respectively, bounce off each other so well and represent for Sabrina two extremely different paths. Zelda may run a mortuary for mortals alongside Hilda, but she’s forever a witch in a witching world and she lacks the empathy for mortal problems like, well, mortality. Otto gives Zelda a fantastic mean streak. Hilda is her opposite, in many ways. Lucy Davis brings empathy to Hilda, having her work in a garden (bringing life to the ground), and showing sympathy and sadness for lives lost and brought to their mortuary. Hilda prizes life, whether or not it’s mortal.

Rounding out the cast are Chance Perdomo as Sabrina’s cousin, Ambrose, and Michelle Gomez as Ms. Wardwell/Madam Satan. So far, Ambrose is more a teacher and exposition machine, but he’s still very interesting. Why can he only stay on the Spellman property? What happens if he leaves? What does he do all day? His most poignant moment comes when he’s describing what lies ahead for Sabrina after she becomes a full witch and you see the anguish and regret on his face, the expressions of someone who looks young but is very old. We don’t know what got him banished to house arrest, but suffice to say it had to have been serious.

Michelle Gomez is easily chewing the most scenery, and looks like she’s having a lot of fun. She gets to play both Ms. Wardwell, Sabrina’s favorite teacher, and Madam Satan – who kills the mousy Ms. Wardwell and possess her body before going on a shopping spree to trade in those dour schoolmarm outfits for some bombshell pencil skirts. Somehow, no one bats an eye.

What grounds such a fantastical presence is that Sabrina’s world is presented as just another world that sits alongside our mortal one, with the same foundational issues like sexism and oppression. The only thing truly unbelievable is that Sabrina felt safe using the shower at school and walking barefoot on the locker room floor. This is how you get foot fungus, Sabrina. I don’t know if your incantation can ward off something that evil.

In future episodes, the show will need to give us a reason to care about the ho hum mortal high school world, which is drastically less exciting (and fashionable, judging from the Weird Sisters’ dresses) than the witching world. Sabrina is going to need us to care about Harvey, Ros, and Susie. It’ll also need to give us more information about Salem, Sabrina’s tentacle monster familiar who chooses the guise of an adorable black cat. For example, does Salem actually like cat food?

What’s especially wonderful about Sabrina’s set up in the first two episodes is that the conflict isn’t about Sabrina trying to decide between being a full witch or being with mortals like Harvey, Roz, and Susie. Sabrina knows who she is; she wants to be a witch. That’s never in question. Her frustration stems from feeling that she doesn’t have a real choice in when to have power, when she wants it, and how she wants it. Her agency is not for sale to be at the whims of anyone else, not even the Dark Lord. When she finally decides that her best option is to eschew the demands everyone has placed on her to try to obtain power and freedom at the same time, it’s an act of rebellion. It’s a momentous message to put out into the world, and I can’t wait to watch more.