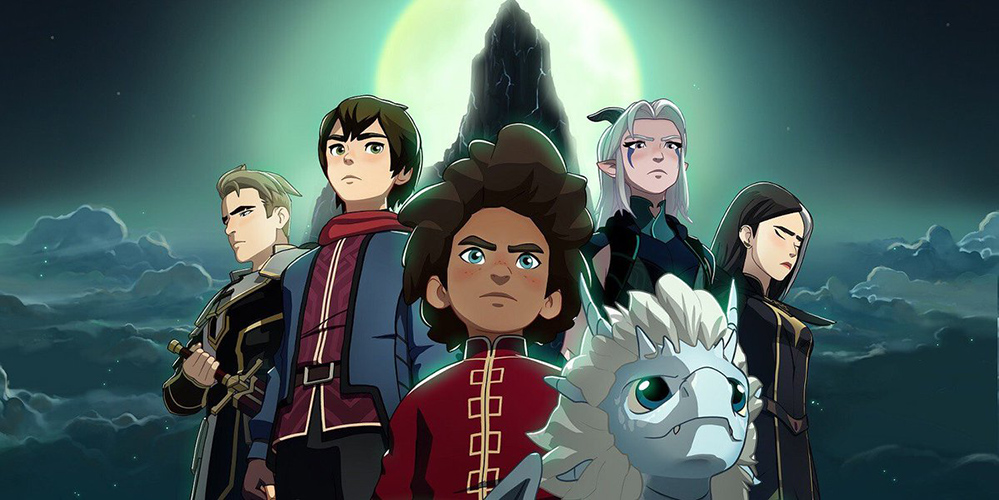 The latest season of The Dragon Prince is everything the show has been building up to since the first. Naturally, there were plenty of elements to properly accommodate—a major challenge in a season of nine half-hour episodes. Especially considering that the worldbuilding can be quite dense.

With Ezran back in Katolis, the political angle in the show gets a special focus in the earlier episodes. This is mostly utilized to explore Ezran’s difficulty in adapting to his new responsibilities as King, as well as the different expectations everyone has for him. It’s a new development that makes sense considering the show’s central theme of kids being forced to mature earlier than expected because the world where they live is chaotic and requires their abilities to thrive. However, all of this is quickly set aside to get back to how things were in the earlier seasons, i.e., a story that is, first and foremost, about underdogs in a race against a corrupt government.

With Ezran away, the relationship between Rayla and Callum finds new lawyers that would not have been quite possible with Ezran still hanging around. The heart of the action scenes is all about combining Callum’s awkwardness and Rayla’s swift assassin agility. Though by this point, Callum has been in enough fights to stand on his own because of his knowledge in magic, which pays off in increasingly cathartic ways as the season goes on. Despite the urgency of delivering Zym back to the Dragon Queen, the show takes its time to indulge in the fantastical wonders Xadia has to offer, which are equally rich in cuteness and danger. A set of fascinating creatures provide an ideal background that motivates both Rayla and Callum to be open with each other and grow thanks to their mutual admiration.

One of the most captivating turns this season was the arc Soren went through, which began to fully blossom after having the seeds planted in the previous two seasons. As it has been the case in co-creator Aaron Ehasz’s work, Soren’s story is about a potentially noble boy who’s led astray by the pressure to live up to a subtly abusive paternal standard (where humiliation and gaslighting are mistaken for discipline), and learning that family isn’t an inherently positive influence. Soren is still very much the bumbling fool that serves as comic relief, but he’s acquired a stark fierceness that makes you root for his success.

As a contrast to Soren, Claudia continues to grow as the most interesting antagonist in the series. What makes her unique is that, unlike her father (Viren), she doesn’t have a typical villain motivations or personality. Viren may occasionally pretend he’s in the service of a just cause, but he ultimately knows his quest is all about acquiring limitless power, and his openly arrogant demeanor conveys that at every occasion. Claudia is like Soren in that she has the capacity for heroism, with the key difference being that she allowed herself to be carried away by Viren’s seductive ways, intended to keep Claudia on her father’s side. She’s a dangerous adversary in war and psychology, and the fact that her personality is closer to the one of a classic fantasy protagonist than the one of a villain makes her even more unsettling for the audience. We’re so used to know what to expect from that humorous and soft spoken manner of speaking that her acts of aggression become even more menacing.

The Dragon Prince has never been shy about being influenced by The Lord of the Rings. This is remarkably evident in the finale’s climax, which unfolds in a way reminiscent of the Minas Tirith and Helm’s Deep battles in Peter Jackson’s seminal trilogy. Even the smaller characters are given fun moments to show off and determine a crucial factor for the battle’s outcome and, consequently, the story as a whole.

Even though this is the culmination that we were promised, the finale leaves the door open for more adventures. Everything up until the last scene seemed like a definitive closure on this saga; but these are characters I like watching grow and spending time with, so I’m curious about the possibilities. Book 3 is The Dragon Prince at its most ambitious, and fortunately, also at its most emotionally satisfying.