The God in the Machine 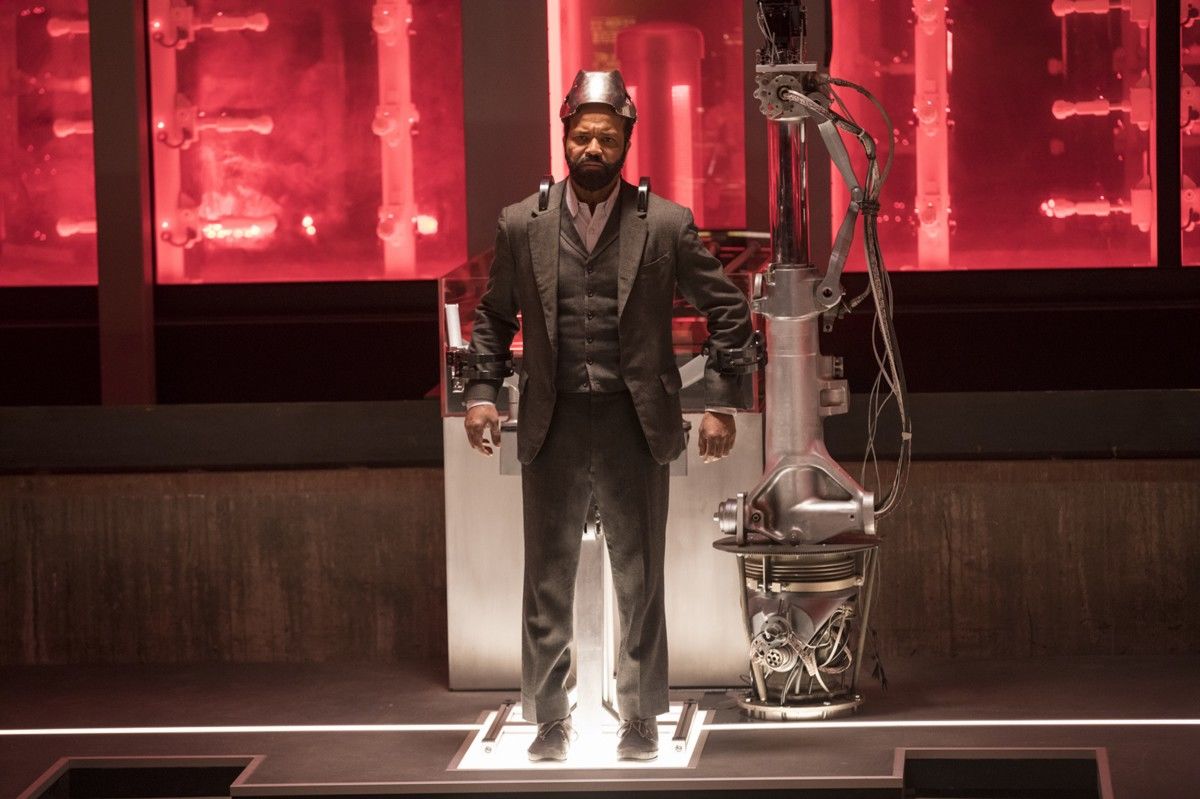 The notion of free will is inevitably at the heart of any story questioning what it means to be human, or for the hosts of Westworld, human-like. It’s an idea blatantly stated twice in this smorgasbord of an episode, a pick and choose of elements that never feels cohesive for the running time.

We start with what appears to be a Pre-Ford Incident scene of Bernard once again talking privately with Dolores, something we got the impression was focused on in the last season because it was against park protocols as we were all waiting for the movie’s Malfunctioning Murderbots shoe to drop. The twist here is that it’s actually Ford using Dolores to test the Bernard robot’s fidelity to the real Arnold, much like Young William was testing his father-in-law’s host recreation in episode 4, “The Riddle of the Sphinx“. As information it’s interesting, I guess, but it’s a granular detail added to a story that’s already been told. We already know Bernard is a robot and had the bugs worked out, at least enough to fool himself. In terms of the current story it adds as much as finding out Bernard wears Vans rather than Converses.

In Shogunworld our merry band of survivors head back to town where they are confronted by another samurai. The Shogunworld version of Hector wants to duel him, but Akane, Shogunworld’s Maeve-equivalent, wants Maeve to stop it using her newfound powers. However, Maeve explains: “We each deserve to choose our fate. Even if that fate is death.”

Free will. There it is, the idea of this episode even if it’s a vague fiber in a jumble of plot threads. Cue a gory samurai sword fight between two characters we hardly know because we’ve been in a Japanese-inspired setting for two episodes, so of course the show will go there.

It goes back to a complaint I leveled at the show in my review of “Sphinx”, that of it feeling the need to offer up titillation even when the story is stronger without it. Part of it has to do with the show’s colonialism themes, of witnessing the exploitation the show claims to be against. But there’s something odd about a series that will wag its finger over the audience’s need for sex and violence but will make that statement with people we’ve seen naked, shooting guns (or clashing swords as the case may be).

We catch up with Charlotte trekking through Westworld Command with Ashley Stubbs of security and the Peter Abernathy bot, Dolores’s “father”. Charlotte discovers Abernathy still has the data while Stubbs is caught off guard by all these hidden revelations despite his job being security. Charlotte doesn’t care, she only wants the data, and as such, has Abernathy nailed to an operating chair until they can get it.

Elsie and Bernard find out that the park has been foiling every Delos hack to try to get the system back online back at a place called the Cradle, where the host servers are kept, even though the Cradle itself is just supposed to be an information storage facility. They make their way to the Cradle and Bernard—after remembering that he took the orb we last saw in episode 4, “Sphinx” (quickly proving to be the season’s reference point and key) to the Cradle—asks Elsie to put him inside so he can find out who was last uploaded. The Cradle, it turns out, is the mysterious location Dolores and William want to get to as well, though why the show creators hid this in earlier episodes—down to keeping the name secret—from the audience is anyone’s guess.

Maeve and the Shogunworld gang continue the mission the writer, Lee, had suggested in the last episode: going to Sakura’s home village (ostensibly to get access back to Command) even if they’re now doing it to mourn Sakura instead of save her. When they’ve made peace at the shrine and it’s time to go below, Maeve offers to take Akane and the samurai with them, but Akane stops her and repeats what Maeve said about them deserving to choose their fates. As they say goodbye, the Westworlders nod to their Shogunworld counterparts, and while it’s meant to be serious, it reeks of the identical groups of friends passing each other in Shaun of the Dead. Sliding down a body chute, Maeve’s old gang end up in Command again, with Lee leading the way to Maeve’s homestead and her daughter.

Dolores, introduced playing the saloon piano, makes a plan with Teddy to get into the Cradle, though they refer to it as the mesa (as that’s where it’s located in the park). Teddy, not wiped, but reprogrammed to Dolores’s new specs, is brutal—something Dolores doesn’t appear to like now that she sees it firsthand—as he kills people wantonly. Teddy lays his new programming, including wanting to leave the park, at her feet.

William travels with his daughter to the Cradle. He thinks Grace is a ploy from Ford to throw him off the game—something she denies. Saving her dad from a run in with bandits, they eventually talk and it’s a scene that works, actors just keying into and sparking off each other’s energy. She is surprised at how different he is in the park than outside it, noting how her mother was the only one who could see him for what he really was. She also tells him that if he comes with her and gives up, she’ll start to forgive him for the part she blames him for in her mother’s death.

In a small, weird aside, she mentions how she came to get him but first wanted to visit Rajworld as it was her favorite. William notes how she was scared of the elephants as a child and she looks at him, reminding him it was her mother who was afraid of the elephants. William is taken aback, though he eventually agrees. William might be such a part of the park he’s losing his memories of the outside world, or he or Grace could be a host. Time will tell.

Inside the cradle, Bernard takes the train into Sweetwater where everything is functioning picture-perfectly, Dolores with her shopping, Teddy leaving the saloon. Bernard looks around for who the latest upload might be. Outside, in Westworld itself, Teddy and Dolores enact their plan: crashing the train—where they’ve trapped the tech who reprogrammed Teddy—into the mesa. The jolt rattles Westworld Command and we see it affect Elsie and Bernard. At least there’s some indication of when these stories are all happening.

Maeve and her group make it to the homestead where Maeve sees her daughter again, and her daughter’s new, very Maeve-like mother. Suddenly, the Ghost Nation invades just as it occurs in all her memories. She takes the daughter and runs, leaving the new mother to be attacked—an interesting and selfish choice being that we know she can now command other hosts without even having to speak. When the leader of the Ghost Nation tells her they are meant for the same path, Maeve considers it but flees anyway.

Bernard’s quest to find out who he uploaded ends in the saloon. At the piano is a figure playing. Robert Ford’s face is reflected in the piano glass. “Hello, old friend,” says the ghost—or god, in this case—in the machine.1

A lot happens and not a lot happens in this episode. It wraps up Shogunworld with a neat little bow (and renders our detour into it as seemingly little more than fan service), adds twists to already played out stories, and ends on a new twist, even if much of the audience saw it, or something like it, coming. But for all that—for an episode with samurai battles, train explosions, and Indian attacks—there’s a lot of sound and a lot of fury, but little of significance. This is not Westworld at its best, but for what there was, there sure was a lot of it. When Westworld is on its game, it’s the opposite of that Elvis song: A little more conversation, a little less action, please.

Fleet Week: OPERATION RED SEA Previous
Let's Talk about "You Know Who" In SOLO: A STAR WARS... Next