WESTWORLD Season 2 – The Riddle of the Sphinx

"There was only ever the devil..." 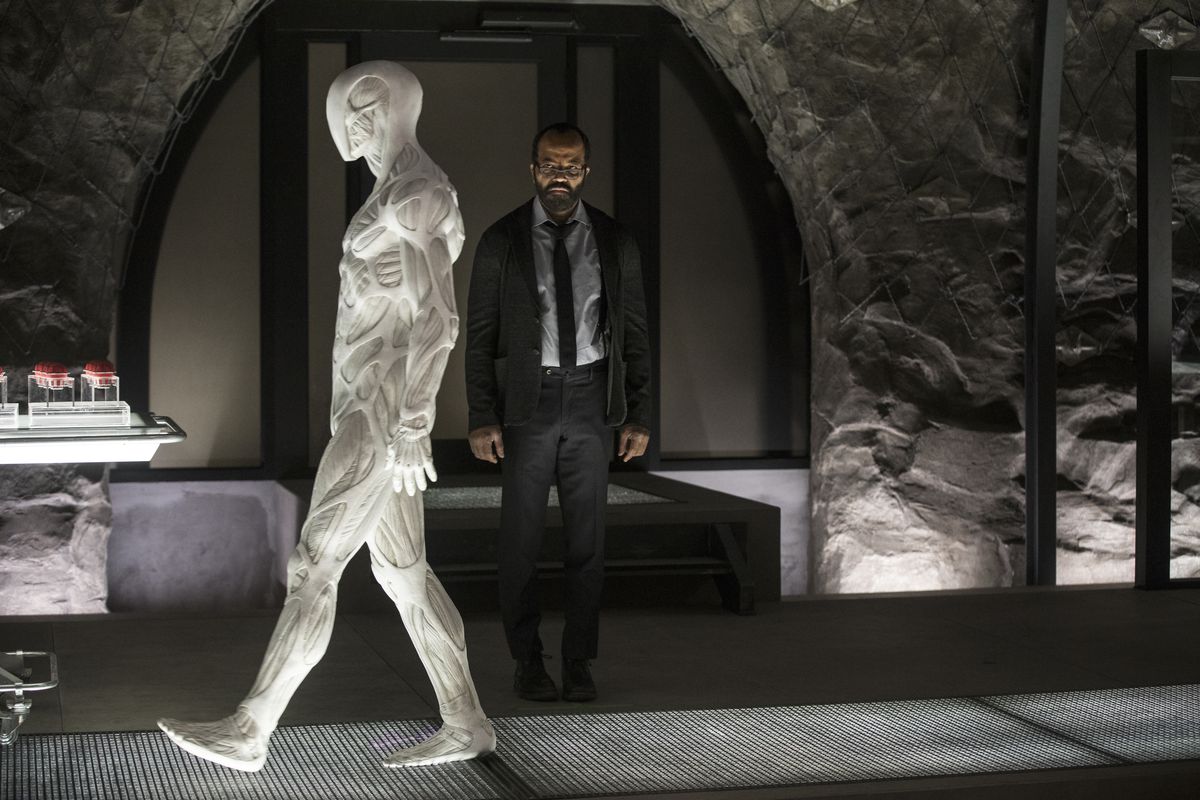 The answer to the riddle of the sphinx—what goes about on four legs, on two, and finally three—is, of course, Man.1 And Westworld is all about what Man is, be it real, artificial, or as the show posits, somewhere in between. What personhood means has always been at the heart of Westworld’s philosophical leanings.

The hosts are (or were) on loops, resetting their stories over and over again. But a guest, who comes into the park and does the same things, eats the same meals, sleeps with the same robots is, in a very real sense, on just as much of a loop. Someone who goes on the Pirates of the Caribbean or the Haunted Mansion every time they visit a Disney theme park is as much on a track as the animatronic pirates or ghosts that perform the same rote actions are. Westworld comes at this notion in both the games that the park is playing with the guests (William in particular) and what, exactly, it seems the big secret behind the scenes is.

Opening where the last episode left off, with Clementine dragging Bernard through the desert, she ends up depositing him in a cave where he discovers Elsie (remember her, the tech who assisted him last season until she got conked on the skull and disappeared into the story ether?). Elsie is understandably wary of Bernard—he, under Ford’s control, is the one who left her there. Of course, this plot angle muddies the timeline a bit, but let’s go with it. The story seems to be heading somewhere.

After freeing her, they form an uneasy alliance. Bernard, memory flitting from thought to thought and not in any particular order, figures out the cave leads to a secret lab that Ford had installed when he was refitting the park (cue that fuzzy timeline again). Sure enough he finds the entrance and they go in, Elsie willing to fix Bernard’s memory problem and give him more brain fluid to top him off. While in there, she also reroutes his processing systems as she says his brain is functioning almost like he was shot in the head (Surprise! He was).

Standing in the lab, a disaster area festooned with the corpses of dead lab techs, Elsie tries to figure out what happened, depending on Bernard’s fractured memories to help fill in the gaps. While this happens, we intercut with the story of James Delos, William’s father-in-law who helped pass on the business to William. He’s going about a daily routine: exercise, clean up, eating, etc. Sometime during the day he gets a visitor, Young William, coming in and asking him how he’s doing. He tells the old man he’s there to help with his exit interview so he can leave the apartment. He’s there to test responses. At the end of their conversation William hands the old man a paper.

The James Delos reveal appears huge in the scheme of things. In Futureworld, the sequel to the original Westworld, Delos was making fake versions of international leaders in an attempt to take over the world. While there’s nothing in the series to say that isn’t still a goal of the company, what we’re seeing is even more venal and horrifying: Rich people who refuse to give up life being downloaded into immortal bodies. And, with each of the failed iterations of James (all of them start malfunctioning at some point, the brain not able to accept the reality of being alive again), 149 in all, we see the extent to which the rich are willing to go to gain this immortality in all its brutal, punishing excess.

In a subplot out in the park, Old William is, with his buddy Lawrence, taken hostage alongside the townsfolk of Lawrence’s hometown by the Confederados that Teddy set loose in the previous episode. This story, in an episode already padded out with an extended length, serves to move him ahead very little, but provides most of the episode’s guns and guts. In an even smaller subplot, our would-be tiger chow from the last episode, Grace, gets some added details. She knows the parks, doesn’t much care for them, and can speak the Ghost Nation language to the surprise of Ashley Stubbs of Westworld security, captured alongside her. She gets an added detail when she escapes, gets a horse, and rides to meet Old William whom she addresses as her father.

There’s something about the show that seems doubly at odds with itself, insulting both its own work and the audience at the same time. It’s as if the showrunners think audiences won’t stick with it if there’s no breasts and gunshots every so often, which also betrays a lack of security in the writing in assuming that the audience wouldn’t be willing to forgo breasts and gunshots if it’s compelling enough. Alas. Even still, the rest more than makes up for it and slots alongside some of the better season 1 episodes.

We see James one last time, but this time it’s Old William who visits. There’s an odd sort of lamentation to him, explaining that they can never get the models to work quite right and that the old man functions better as a memory than a still-living being. And there’s a cruel streak when we see him tell the technician that instead of destroying the model, as they have every other failed iteration, to let it degrade. There’s the notion that none of the recreations were for his father-in-law’s sake, but for his own, and that his disappointment that there’s no way to recreate a fully functional person is a part of this cruelty. If William can’t be immortal, he can at least see how bad immortality can get.

Bernard remembers that he had a hand in killing the scientists—a secret he keeps from Elsie, along with a small orb that was developed in the lab for some secretive purpose—before they make their way to a back chamber in which they discover the recreated apartment of James Delos in ruins. There they come across the degrading model William abandoned, cutting his face with broken mirror glass and telling them there was never a God above. There was only the devil below…and the devil’s reflection when they looked up.

Westworld ultimately feels much like a horror show. From the guest’s predilections for terrible deeds, to the park writers concocting cannibal cult stories for the guests to play along with, to details like the faceless drones who work the underground labs: walking, marble-colored frames of exposed muscle, it’s a series full of gruesome detail. And in the best episodes, facing the existential dread of what it means to be human is the scariest thing of all.

As an aside, I wanted to post a few thoughts about the season as a whole. Michael Crichton’s Westworld, like his Jurassic Park, are Frankenstein stories about man creating life and it ending badly. Being that we know Robert Ford is nostalgic, down to keeping a recreation of his childhood family in a secret cabin, and his parks being even grander scale version of theme park illusions, there’s a thought that struck me and made me wonder if the show was going back to the Frankenstein source. In the novel, Frankenstein sets out on his fateful quest to create life after his mother dies and he vows to never suffer such loss again. Maybe Westworld the park is Ford’s reaction to something similar, and the robots—Bernard and his fractured thinking, Dolores and her freedom within her loop, Maeve and her assumption that she’s outside the loop—are all long-term trials to recreate the human mind. This was a goal we as the audience assumed he had achieved with the hosts, but one that Ford may have disagreed with.

Of course, there’s the alternate idea, and one that fits with the show’s horror leanings: that Ford never succeeded in recreating the human mind and that every host brain is essentially that of a former person. Maybe Ford realized that while he could 3D print a body, he couldn’t create a fully functioning mind like William attempted, but that it might be possible to slot a sort of half-life, a role—bartender, sheriff, bandito—onto them. He’s still Frankenstein, in other words, but the question of being human gets a whole lot messier.