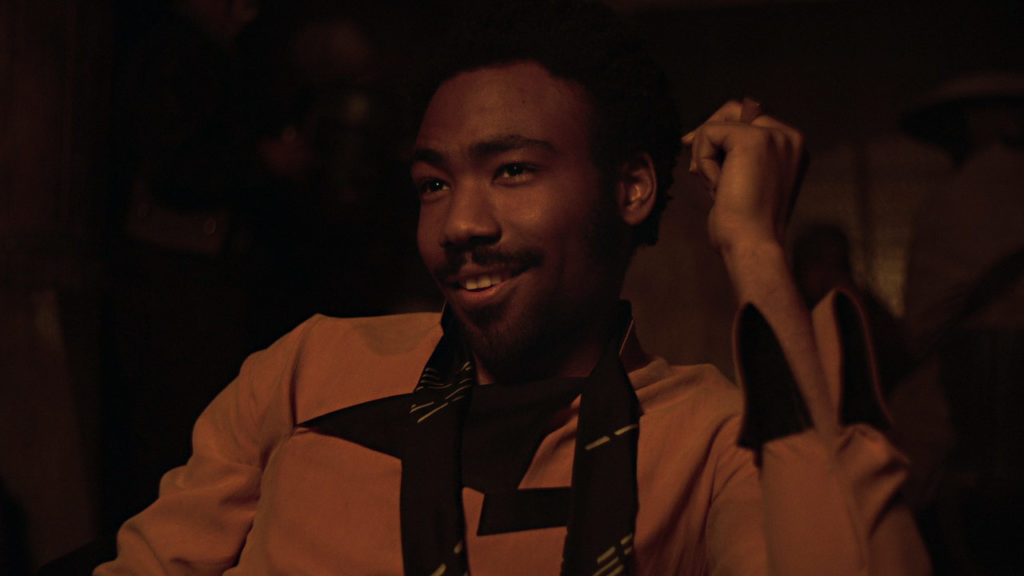 Let’s just get it out of the way — here is the new trailer for Solo: A Star Wars Story:

This actually looks pretty great.  It feels like an Ocean’s Eleven type heist film but where the central character is one of the lower level members of the team1, which seems like the most interesting choice to make.  As much as we all didn’t really want or need a Han Solo prequel, it looks like Ron Howard has at least made something fun and adventurous.  For all the rumors surrounding his performance, Alden Ehrenreich looks and feels both familiar and unique in the role Harrison Ford made famous, and unlike Sunday’s teaser, this trailer is heavily focused on his performance.  This isn’t a like-for-like caricature, but there’s a similar cocksure-yet-anxious nature to Ehrenreich’s Solo as there always was to Ford’s.  I’m excited to see more as Ehrenreich somehow stole the show of 2015’s Hail, Caesar! despite that film’s stacked cast.

But lets get down to brass tacks — the real draw is Donald Glover as Lando, smoothest gambler in the galaxy.  I know it’s petty, but I still can’t forgive the Star Wars sequel trilogy for not bringing back the best character in the galaxy, so Solo tapping one of the 21st Century’s greatest artists to play the role immediately has me down for whatever Howard and Co. have in store.  We merely get a few glances, but the few images we do get are selling me all I need to know (see the header image above).  This might be Han’s story, but we’re all here for the Lando Show.

So lets discuss in the section below:  Love it? Hate it? Want to see more Lando?