Dad Media Month: SPLINTER CELL and the Idealization of Espionage 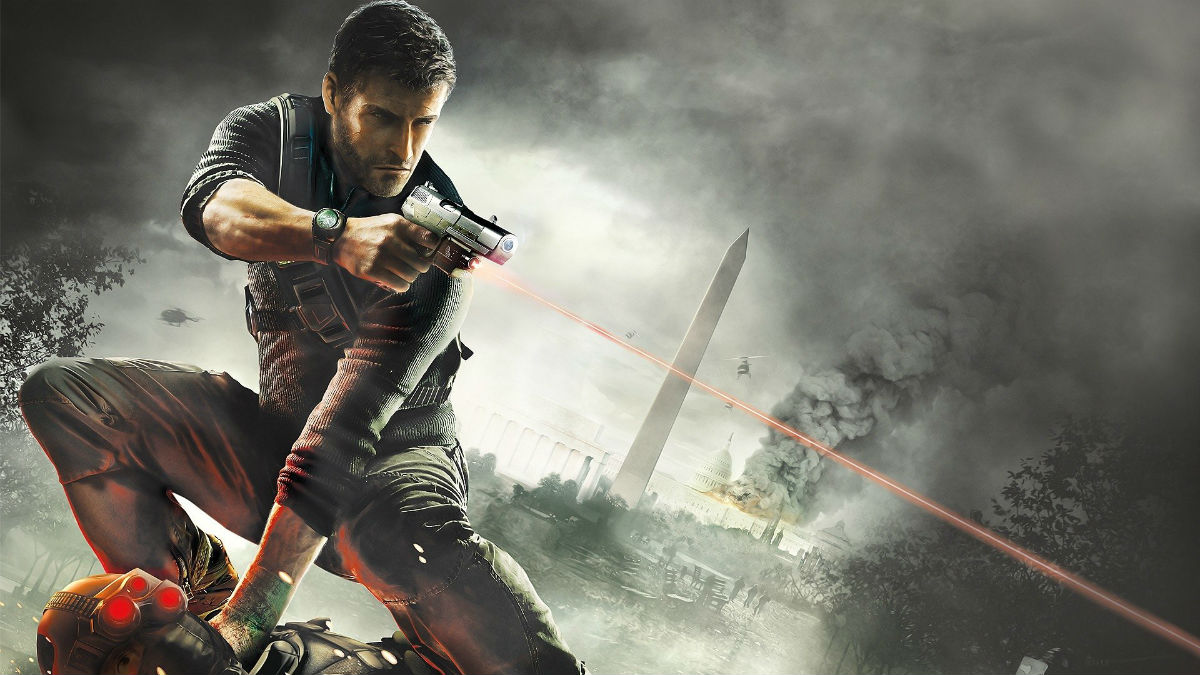 A recurring theme in the stories associated to the Tom Clancy brand1 is the importance of U.S. intelligence agencies as a line of defense for the world. They’re portrayed in an almost romantic fashion, where their intentions are undoubtedly heroic and anyone who opposes them is a threat to be stopped. This mindset, along with a high-tech espionage context, gave birth to Splinter Cell, one of the series most representative for geopolitical fears in the 21st century.

The franchise follows Sam Fisher, a special forces spy (referred to as Splinter Cell) working for an NSA black ops division called Third Echelon. Splinter Cells operate under the Fifth Freedom: an authorization to turn a blind eye to legal boundaries for the sake of protecting the U.S. The idea of a government institution sacrificing accountability for the greater good is one that can be easily troublesome if not handled with enough sensibility and intelligence. Fortunately, Splinter Cell makes sure to consider both the strengths and the flaws that come with an organization as shadowy as Third Echelon.

At first glance, Sam Fisher seems like a traditional action protagonist. Military veteran (he’s a former Navy SEAL who fought in the Gulf War), middle-aged and with the tough masculine swagger associated with the Reagan era. But thanks to some clever writing and Michael Ironside’s carefully layered voice performance, the games hint at a morally gray man who was shaped by the shock of both suffering from and executing violence. Fisher’s need to cope with those experiences led him to develop a twisted sense of humor, which he expresses whenever he finds himself in a life-or-death situation. Most notably, when he mocks and makes sadistic threats towards terrorists. Fisher’s sardonic attitude not only offered insight into his character, it also helped to ease the tension in nerve-racking gameplay that left almost no room for mistakes or improvisation.

The first three games in the franchise (Splinter Cell, Pandora Tomorrow and Chaos Theory) have their fair share of jingoistic Clancy traits, like the scary foreigner stereotypes, or the U.S. government’s self-entitlement to act as a global police. But there was a recurring motif that escalated as years went by: the idea that some international threats had their roots in the U.S. In Splinter Cell, it was a leak caused by human error (i.e., a CIA analyst placing information in an insecure computer); in Pandora Tomorrow, a rogue CIA agent bent on unleashing a biological attack; and in Chaos Theory, a private military contractor (who happened to be Fisher’s former military comrade) manipulating war to benefit his agenda. Even though all of these cases seemed like isolated incidents, they were hinting at a much larger problem, one that would come to haunt Fisher and pave the way for his biggest challenge: the realization that the structure he has dedicated his entire life to protect is built on shaky foundation.

With Double Agent, the Splinter Cell series planted the seeds for Fisher’s growth. Up until that point, his objectives were clear and didn’t involve much of a personal conflict, because he took for granted that their results would be beneficial in the large scheme of things. The death of his daughter (Sarah) raised the stakes and made them personal. Fisher was now more motivated by self-destructive tendencies than by duty, since he felt he had nothing to lose. This led him to become an undercover operative inside a domestic terrorist organization named ‘John Brown’s Army’. The nature of the operation implied walking on a tightrope between ally and foe for both sides he was working for. This sometimes required him to take innocent lives for the sake of protecting his own. However, for the sake of the mission’s success, he had to repress his frustration. The situation reached its peak when JBA ordered Fisher to kill his boss and friend Irving Lambert, which established Fisher as an unknown quantity and a ticking time bomb for the intelligence community. The emotional toll he took during his time as a double agent would be expanded in the next entry.

The deaths of Sarah and Lambert, the compartmentalized stress from his time within JBA, and the fact that he’s considered a potential threat by Third Echelon made Fisher fundamentally alter his modus operandi in Conviction. Instead of staying completely hidden to avoid open conflict, Fisher takes his enemies out one by one to instigate fear and submit them to his will. He went from interrogating with promises of injured body parts to smashing heads onto walls. Rage was the name of the game, so his trademark sense of humor has virtually no space here. Conviction does a brilliant job introducing these changes organically to refresh the gameplay and inform Fisher’s path towards desperation. A ghost was transformed into a panther.

Despite no longer being motivated by duty, Fisher was under the impression that Third Echelon was hunting him down because of the corrupt influence of its new leader: Tom Reed, who not only wanted Fisher killed, but wanted to take control of the U.S. government. Fisher still believed that Third Echelon was ultimately built with its heart in the right place, and that this situation would be another isolated incident to clear. All of this changed when he discovered the truth behind his infiltration in JBA.

The revelation that Lambert faked Sarah’s death and weaponized Fisher’s trauma to turn him into a double agent made the veteran spy realize that he was working for a system where trust is simply a means to an end. His conclusion was that Third Echelon was too rotten to be saved, so it needed to be destroyed. This confirmed Fisher’s divorce from the intelligence community.

This sour turn of events indicts the romanticization of the intelligence community we often see in spy stories. Third Echelon ended up being taken over by Tom Reed and his goons because it was never trustworthy to begin with. After all, it was created with the idea that its operatives were virtually above the rules of morality. The Fifth Freedom allowed Splinter Cells to have a wide array of options to accomplish their goals. But the lack of limits that came with it blurred the lines to the point where allies and enemies were impossible to differentiate. Third Echelon were the masters of invisibility, and it showed in the fact that not even Sam Fisher himself could tell what was going on inside it.

Not only did Third Echelon betray its best agent, it also used its resources and privileged position to attack Patricia Caldwell, the in-game President of the United States. As striking as it may seem, this was a natural outcome for an organization whose loyalty was taken for granted just because it was part of the the NSA.

Fisher saves President Caldwell and eliminates Third Echelon, but it’s still a bittersweet ending for him. Washington D.C. ended up in flames after Reed’s attacks, Fisher is still processing the literal and metaphorical bullet in the back he took, and he was left to his own devices. His trust in the intelligence agencies is gone, and he’s more violent and impulsive than he used to be. But there is one aspect of him that remains untainted, i.e., his devotion to the people that have aided him in times of need.

Throughout Conviction, Fisher is helped by his war veteran friend Victor Coste. This pays off at the end of the game, when Fisher rescues Coste from his imprisonment by assaulting Coste’s captors, reaffirming the fact that he doesn’t need government validation to take action on his own terms. And that his moral compass points towards the same direction as in his Splinter Cell days. Saving innocent people is still his priority.

Splinter Cell took the anxiety surrounding the U.S. government’s response to terrorism in the 2000s and placed it as a subtext for a saga that cleverly subverts and heightens its tropes. It knew how to make its technical progress mirror the arc of its protagonist. And in the process, it shaped Sam Fisher as a character whose tortured but fun personality asks the audience to reflect on what they love and what they should question about the shady world of espionage.

Dad Media Month: Playing These PATRIOT GAMES Previous
The Second HALLOWEEN Trailer Has Arrived. Will Kill You... Next