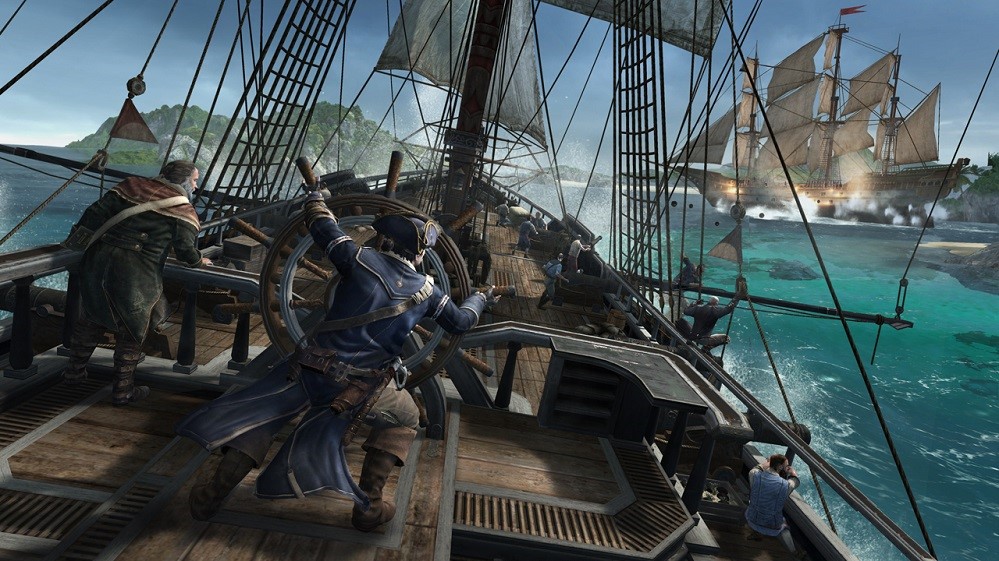 One of the trademark qualities in the Assassin’s Creed series is its ingenuity to contextualize historical events to inform and compliment its narratives. Considering the importance ships have in shaping history, it’s only logical that at some point, naval travel and warfare would become a prominent part of its lore.

The Kenway trilogy (which consists of Assassin’s Creed III, Assassin’s Creed IV: Black Flag and Assassin’s Creed: Rogue) tackles fundamentally different historical settings (American Revolution, Golden Age of Piracy and the Seven Years War, respectively), but it does have one key factor that works as a connective tissue of sorts for all its protagonists. To some capacity, all of them were characterized by their endeavors in the sea, involving themselves in battles and discovering lands that would end up defining the future of the franchise to various extents.

In the case of Assassin’s Creed III, we begin following Haytham Kenway (son of Edward Kenway from Black Flag), who arrives in America via a maritime journey that foreshadows the dynamics of a good part of the game, i.e., peaceful at a glance, but with conflict boiling under the surface. Haytham is threatened by other travelers, but his wit and self-confidence allow him to survive and gain the upper hand. He even gets to the point where his actions become fundamental in the stability of his ship. This cleverly indicates that Haytham is more than just a fancy privileged man. Even though he’s not the main protagonist, this section is important because we get to know how he engages with the world, something that plays a more important part later in the game.

Assassin’s Creed III is, first and foremost, the story of Haytham’s son Connor (who also goes by his Mohawk name Ratonhnhaké:ton). Connor is faced with an American Assassin Brotherhood that was left virtually nonexistent thanks to a series of carefully coordinated attacks by the Templars.1 In his path to restore the Brotherhood to its former former glory, Connor becomes the Captain of the Aquila, an old war vessel that will accompany him in numerous adventures to ensure the Atlantic Ocean is safe to navigate for him and his allies. The naval missions — which include the Battle of Chesapeake Bay, as well as encounters with Benjamin Church and Nicholas Biddle — work to highlight the leadership factor within the Assassins. Connor’s desire to achieve peace and justice in the American Colonies leads him to use his newfound talent as a ship Captain to inspire other men to join his cause. To get victory in the naval missions, it is fundamental to juggle variables like timing, position, weather and even the type of ammunition to be used, putting the players strategy and improvisation prowess to the test. It’s worth mentioning that Noah Watts, the actor in charge of voicing Connor, does a fantastic job inspiring respect and courage when giving orders to the sailors. The naval missions are a secondary part of Assassin’s Creed III’s gameplay, but they serve as a breath of fresh air from the sneak and attack dynamic that defines the series.

However, the naval missions have more going on than war. They also shed a light on Connor as an explorer who discovers lands that are lonely, but rich in history about men who risked everything in hopes of getting more wealthy or powerful. It’s a reminder for Connor to watch his step regardless of his experience and abilities.

Accurate to the American Revolution tactics, the Boston and New York of Assassin’s Creed III are surrounded by imposing battleships that serve to intimidate the Continental Army and provide heavy support for the English troops. Not to mention that ships were fundamental in keeping a steady communicative and economic flow between England and the Colonies. This element provides a chaotic atmosphere that effectively sells the gravity of the conflict and the importance naval warfare had in land battles. Interestingly enough, to defeat these obstacles, you don’t require other ships or canons. Connor has to take advantage of the little he has and use it to maximum effect. In order to overcome the defenses of coastal battleships, the player is encouraged to be patient and prioritize brains over brawn. Connor is a skilled fighter, but his ability to pass unnoticed is what gives him the edge against the ships, as well as entire battalions.

The heart of Assassin’s Creed III is on the gray relationship between Connor and Haytham. Even though they’re family, they lived very different experiences in very different social backgrounds. Connor is a Native American who saw his village burn, which made him want to take down the colonialist elite that seeks to use his land as a resource to be exploited. Haytham is a wealthy Englishman who sees the elite as a tool to gain control and spread stability across the Colonies. In the Revolutionary War, they have an opportunity to achieve their goals and change things for the better. They end up joining forces out of common interests. What makes the dynamic compelling is how Connor and Haytham figure out how they can work together despite their opposite ideological worldviews. The isolated and often tense nature of society in ships molds a significant part of how Connor and Haytham interact. When they board the Aquila, these men get to know each other on an even more personal level. Haytham appreciates his own leadership potential in Connor, even though he prefers to keep his sentiments hidden to maintain his status as an authority figure; since he knows that bonding with his son can be an emotional incommodity. And Connor notices that behind the fancy poses, Haytham guards a backstory of grief and disappointment that lead him to maintain his relationships strictly professional, as well as a violent attitude in the face of adversity. We often associate ships with discovery and adventure, but Assassin’s Creed III succeeds at highlighting how human behavior reacts when it’s in deep waters and away from the noise of civilization. In this case, we see two men developing an uneasy combination of respect and skepticism. In other circumstances, there could have been an endearing camaraderie. But they were so loyal to their own beliefs and causes in the Revolution that the relationship had no other way to go but one of them killing the other, in this case, Connor eliminating Haytham; but not before the latter admitted an adverse sense of pride in conceiving and getting to know such a determined warrior.

On top of enriching its setting with historical accuracy, an exciting new brand of combat, and a sense of satisfaction for spending time in the game’s land, the naval element in Assassin’s Creed III is about how ships build people’s destiny and their way of perceiving the world. The way Connor commands the Aquila represents the birth of a new society, as well as the recovery of a lost glory, making for a parallel between the birth of the United States and the reestablishment of the Assassin Brotherhood in the territory. It was effective enough to work as a gameplay template for how Assassins like Edward Kenway or Aya would pave their ways towards leadership and strategic success. But not less importantly, battleships are valuable components in a story about discovering ambiguity in a conflict where morality is not as obvious as it meets the eye.