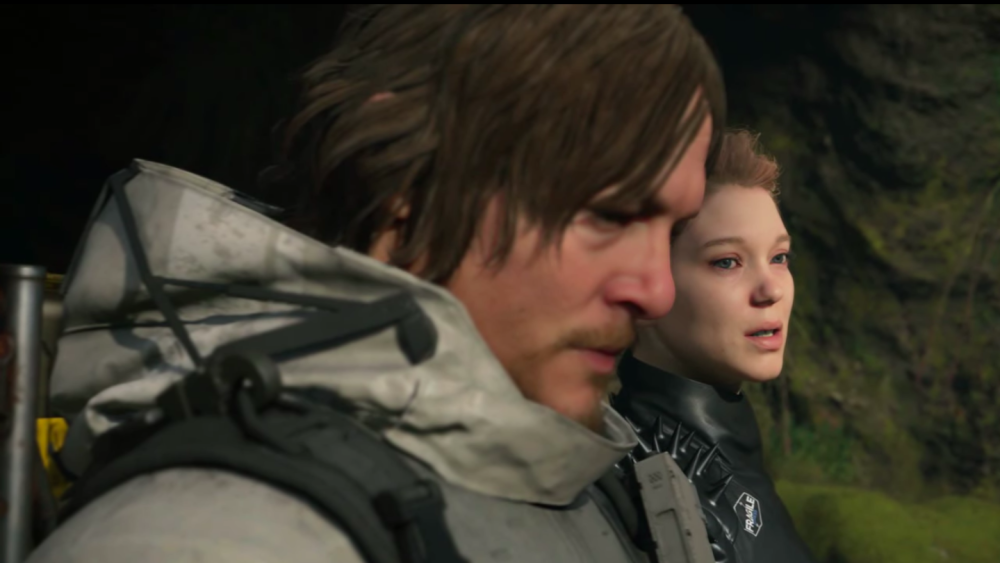 “You can make America whole.”

The first real substantive content about Hideo Kojima’s first post-Konami/Metal Gear Solid game, Death Stranding, has finally arrived in the form of a nine minute trailer that, appropriately, offers more questions than it does answers.

The trailer opens with the now-iconic Tummy Baby and quickly moves along to what appears to be this or another baby’s (there are a lot of babies here) POV, as LB favorite Mads Mikkelsen sings to it softly. From there we smash cut to a dilapidated Oval Office, where a rugged Norman Reedus tells a bed-ridden President that she’s only president of jack-shit.

We move on to see glimpses of in-game content as Norman Reedus, or Sam Bridges as he’s known in the game, explores a gorgeously rendered cross between Middle-Earth and a post-apocalyptic America. He trudges up snowy mountains. He rappels down steep mountains. He crosses through destroyed cities. Bridges is a delivery man, who is begrudgingly tasked with helping to reform the United States (a man named Bridges bringing people together? Kojima has never been one for subtlety). We catch glimpses of Troy Baker’s nefarious gold mask wearing mercenary, a captured Lea Seydoux, and a bed-ridden Nicolas Winding Refn.

It’s all rather overwhelming. But the centerpiece, and perhaps the most intriguing component yet, is Bridges exploring a forest while using his backpack device to sense approaching “BTs.” Though the beings haven’t been expanded on in any substantial way, they appear to be things from “the other side” who can manipulate our dimension at will. Sam is detected and dragged shouting into the ground. But it doesn’t look like he dies….instead we’re brought over to what the trailer describes as Hades. It’s a WWI battleground, with tanks and men being rendered out of red mist as Sam races through, trying to survive. Then Mads shows up once again, this time emerging naked out of a pool of dark liquid, massive umbilical like tendrils connecting him to a squad of soldiers.

There’s honestly so much going on and being presented that it’s hard to summarize…clearly Kojima has not been stymied by separating from Konami. If anything, his imagination and drive seems bigger than ever.

In the Metal Gear franchise, Kojima was engaged with the sociopolitical behaviors of military industrial complexes and the long ranging consequences of those actions. Unlike an unfortunate portion of video game developers, he isn’t afraid to comment on the affairs of the world in a direct and confrontational way. Kojima making a game about a broken America, haunted by the literal specter of war, where a female President asks the player to help repair the country by reconnecting people, feels like it could make for one of the most optimistic and politically charged gaming experiences since the new Wolfenstein. And while main character Sam Bridges seems quite capable of punching some dudes in the face, it’s telling this his main job is as a mailman, the original and most important role involved with the widespread dissemination of information and connecting people.

It’s too soon to venture further into hypothesizing the semiotic value of Death Stranding, but for now, it looks like everything we’ve come to expect from Kojima, but multiplied by ten. Some creators prosper under the supervision of a major studio and given constraints. It appears Kojima is prospering far more on his own.

Death Stranding officially drops exclusively for the PlayStation 4 on November 8, 2019.

Review: BOOKSMART Previous
Review: GODZILLA: KING OF THE MONSTERS Next