Where you fight among gods. 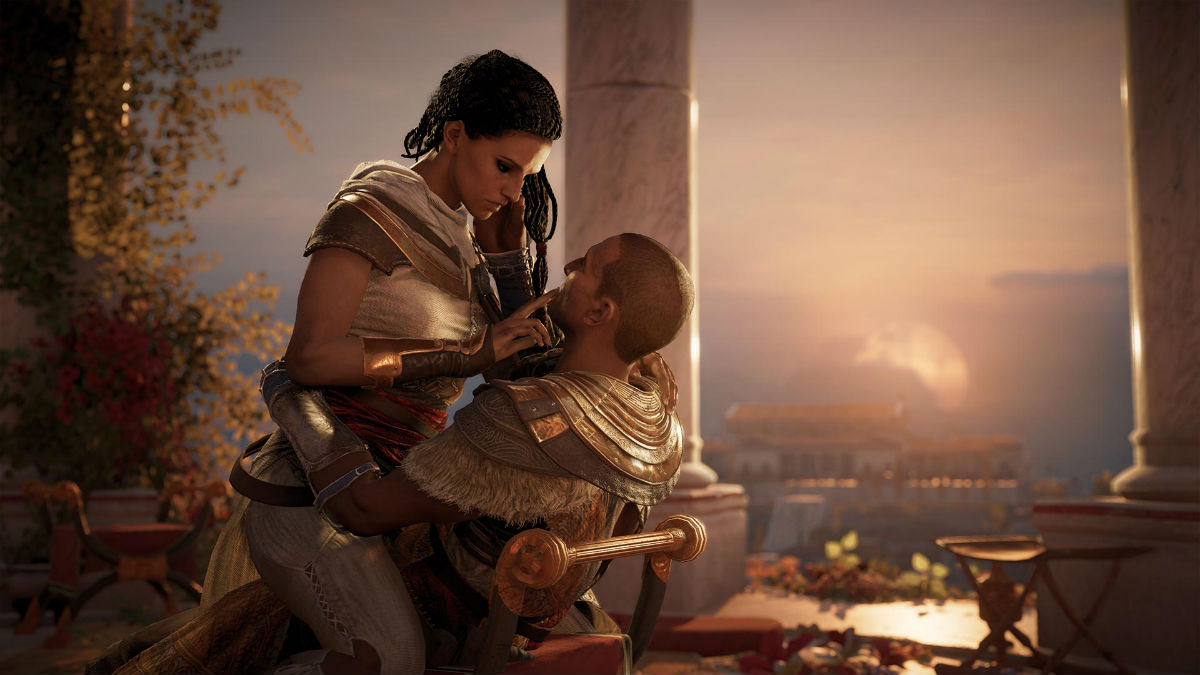 When it comes to possibilities for themes and settings, few universes have the vast potential of Assassin’s Creed. Now celebrating its tenth anniversary, the Ubisoft series explores Egypt under the Ptolemaic dynasty in Assassin’s Creed: Origins: an entry with intense cultural clashes where mysticism and politics are one and the same.

The story follows Bayek, the last Medjay (elite soldiers in charge of protecting Egypt) and his wife Aya, who witnessed the death of their son by a secret society known as The Order of the Ancients. Together, they’ll embark on a path of vengeance to find out more about the Order and their shadowy plans for Egypt. Both Bayek and Aya are very likable protagonists. Even though they went through a traumatic experience, they manage to make space for some fun and romance. Their relationship works, in good part, because their intimate moments are highlighted immediately after the most chaotic scenes. It’s a sensible narrative choice that informs about how each other’s presence helps them to stay sane in the middle of a war. Nevertheless, the main focus is Bayek, leaving Aya as a playable character in only a handful of missions. Aya is the one with the more compelling journey and personality, and it is her story as much as it is Bayek’s, so the game would have benefited from a structure like the one in Assassin’s Creed: Syndicate, where there were two protagonists with equal prominence. Still, watching our heroes lose themselves into idealistic devotion, desperation and violence is in equal parts touching and unsettling, a trademark of the best Assassin’s Creed stories. Their conclusion had just the right balance between fist-pumping satisfaction and existential anxiety to make you wonder if they ended up in a better emotional place than the one where they began.

It wouldn’t be an Assassin’s Creed game if you didn’t get to interact with historical figures, and in Origins, you spend a good chunk of time helping Cleopatra to fight against her younger brother Ptolemy XIII for the total domain of Egypt. Cleopatra is as showy as you’d expect. Every time she appears on screen, she radiates a seductive leader presence that demands your eyes to stick to the screen. Ptolemy, on the other hand, doesn’t get much to do aside from being a whiny brat. To be fair, he’s loathsome enough to make you want to punch him in the face. Julius Caesar couldn’t miss in this combo, but his function is more to move the plot where it needs to go rather than complimenting the game from a thematic standpoint.

As for the antagonists, their screen presence is brief, but clever enough to provide at least one memorable moment with each of one them. In addition to the classic sneak and attack formula Assassin’s Creed is known for, there are bombastic boss battles with fantastical tones to heighten the period’s mysticism (there’s a lot of fun to be had with the way the world plays with Egyptian mythology). However, the game is lacking a Haytham Kenway or a Francois-Thomas Germain, i.e., a commanding central figure that’s easily identifiable as the master of the puppets, so the stakes don’t feel as close and personal as in the other entries.

One of the most challenging bosses in the game.

Since the Desmond Miles saga concluded, Assassin’s Creed has been experimenting with several angles in the present day story, where the playable characters are self-insert avatars getting informed about the zeitgeist in the universe without being particularly active. But Origins has a new contemporary protagonist in Layla Hassan, an explorer eager to prove herself by discovering the memories of Aya and Bayek. Layla gets sufficient backstory to give us an idea of where she’s heading to. But the game knows you want to spend more time in the past and doesn’t delve too much on her. Layla’s story is essentially a movie’s first act, and it teases you enough to get you curious about her.

In the technical department, Origins doesn’t shy away from taking advantage of its eight console generation power. You get an incredibly diverse country (Egyptian, Greek and Roman architecture blend seamlessly with wilderness), and a humongous amount of activities to interact with, including gladiator fights, Ben-Hur-style chariot races and, in tradition with the franchise since Assassin’s Creed: Brotherhood, enemy forts to infiltrate. The keys to enjoy all these missions are patience and effort, because each one of them has a specific level of challenge that becomes easier to tackle when Bayek’s strength and resilience to damage have evolved to a determined extent. This might seem overwhelming if you’re a completist who likes to go for everything at once, but it’s an ultimately rewarding escalation system that keeps the player excited to explore the world and master everything it has to offer.

The elegant and swift fighting moves from the previous games are replaced by a raw brawler style that asks the player to have a more strategic approach in combat. Now it’s not enough to have the right timing when pressing the buttons. You need to consider your exact position, where you hit the enemies, and their level of difficulty during the heat of the moment. Careful planning and taking advantage of your environment are a huge part of the franchise’s ethos, so this new gameplay mechanic makes sense.

In order to make your tactical planning easier, you’re accompanied by the eagle Senu, whose principal function is to fly above territories and let you observe their layout without getting directly inside them. Not only is that a very helpful addition when you’re searching for a specific target, it’s a nice touch that humanizes Bayek and emphasizes his respect for nature, which is a focus on several secondary missions.

The excellent musical work by Sarah Schachner is worth a mention. Her soundtrack gives the game a mesmerizing atmosphere that communicates subtle supernatural elements. And if you want to try it on its own, you’ll notice that it works very well if you’re simply looking to relax and lose yourself in a sea of sounds. You could sit down and listen to it for an eternity without ever getting tired of it.

Assassin’s Creed: Origins manages to enrich the series’ lore (it’s especially illuminating for the events in the Altair and Ezio games), and mix the formula enough to conceive a more challenging experience. It also succeeds where it counts the most: in analyzing the franchise’s core themes (the price of freedom, the consequences of fanaticism, the way the past affects us today, etc.) with emotionally resonant characters and taking advantage of the most fascinating elements in its historical setting.

THE LAST JEDI and the Existential Horror of an Endless... Previous
Adaptation Station: A CHRISTMAS CAROL & POLAR EXPRESS Next