THERE WAS AN IDEA… IRON MAN 2 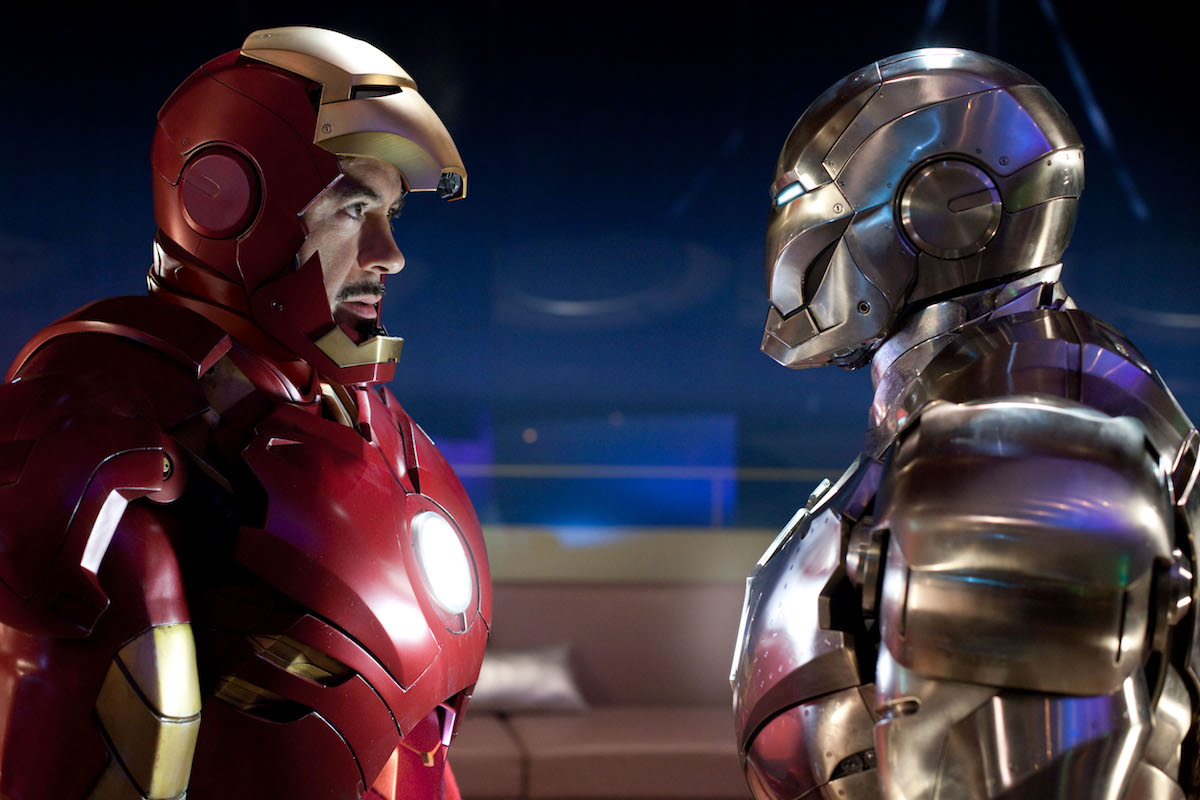 Iron Man remains the only property in the MCU to have two films inside the same “phase”. Two years after the little-superhero-movie-that-could came Iron Man 2, the first movie in the franchise to be planned for a shared universe from square one. At the time, this saddled the film with having to integrate S.H.I.E.L.D. into the story, with Tony having his normal hero’s journey, while being helped by Nick Fury, Black Widow and Phil Coulson. The Marvel Cinematic Universe is a machine that lives and dies by its ability to interlock films. And what at the time was a hindrance has now turned into a (admittedly clumsy) feature.

Less a feature is Mickey Rourke’s much-maligned Ivan Vanko, who opens the movie seeing his father perish. Then, in a dwelling as grim as a middle-east terrorist cave lair, he assembles a box of scraps and hits hammer to iron, working a legacy that is as much his as it is Tony’s; the arc reactor.

The movie‘s attempts at building a dark reflection of Tony are cut short by its reluctance to clearly establish the relationship between Anton Vanko and Howard Stark. Sure, they worked together. But are we supposed to feel sympathy for Anton? Maybe there was a way to make this work. Maybe Ivan could have been Iron Man, too. The movie, of course, doesn’t care about your feelings.

Rourke’s dissatisfaction with the film is well documented. He signed up for a bigger role, and put in the work. He paid himself for the tattoos and golden teeth that make up much of Vanko’s character design, and (surely) more important, he paid for his Bord. He studied the Russian background of his character, going as far as the inside of a Russian prison, where he talked to guards and prisoners. He insisted on having dialog in Russian. He wanted people to see something more in Ivan than your vanilla Russian villain, and despite the movie’s disservice, he got some of those things in, despite Iron Man 2 reducing Rourke’s portrayal to that of a monster-of-the-week

The other archetypical villain in the movie is explored by Sam Rockwell’s Justin Hammer, who is doing more of a Saturday morning cartoon kind of incompetent criminal boss, only needing a steady stream of henchmen to become a fixture of your cereal-munching breakfast. He speaks, emotes, screams like a fool. He dances like a devil. Rockwell, full of unearned confidence, works his charms in elevating the movie’s charisma to acceptable levels through clowntastic delivery of lines so hilariously rehashed you kind of feel bad for his second-rate Tony Stark act. It’s easy to picture him talking to himself in every bathroom, is what I’m saying. Please bring him back Marvel.1

As you can see in this handy graphic, Iron Man 2 boldly tries to split up the core of Iron Man’s thematic antagonists into the two extremes, which is where most of its tonal problems come from. (Well, that, and the ‘Tony is dying’ subplot).

The two villains share three scenes, each in a more cramped environment. First, Justin brings Ivan to an empty hangar of white reflective floor where he explains his plan to bring Tony Stark down, and gets measured to the inch by Ivan. Then, in a workshop (Elon Musk’s, who gets a cameo sharing mutual admiration with Tony, and has an Iron Man statue decorating one of Space X’s HQs) where Vanko plays Hammer in front of his face. And then, in Vanko’s bedroom, where tension rises as Hammer sequesters Ivan’s Bord (He also takes Vanko’s shoes and pillows because he’s on a power trip from getting to play dress up with an Iron Man suit. It’s all pretty wonderful).

Ivan’s Bord is a metaphor for the movie itself; silly, and without much meaning, but with a cool looking crest. Or maybe there’s a deeper layer. Whatever, man. Did you know cockatoos are endemic to the Southwest Pacific and Indian oceans? Do you ever wonder what Ivan’s original Bord was? It seems like a lot of trouble to keep a cockatoo in Russia. Anyway, the Bord is gone, never to be heard from again. Signaling the end of the second act.

But enough about people who aren’t Iron Man. The big thing in this movie is that the arc reactor is poisoning Tony Stark. So he gives the reigns of the company to Pepper in one of the couple’s sweetest moments, before mortality makes him go full douche on everyone he loves. As depression corners him into scratching items off his bucket list (containing things such as “pee in your armor”, and “eat a donut in a donut”), and such is his despair that he ends up having Nick Fury, professional liar, come have a moment of frankness with him.

To nitpickers: Fury questions Tony’s allowing the MK II suit to be taken by Rhodey. The movie explains that there are safety measures, but Tony doesn’t bother because he’s dying and trusts Rhodey’s moral core. A sweet scene that gives new context to Tony and Rhodey’s brotherly fight.

What follows is one of the best Iron Man moments in an Iron Man film: The hero gets a literal vision from the past not by way of flashback, but of technology, as Howard Stark gives hints to his son about a new element he was working on during Stark Expo (the MCU’s stand-in for World Fairs). In this scene, Tony’s character flaws are explored with a subtlety not often awarded to this movie. He brings strawberries to Pepper (he knows there’s something between strawberries and Pepper), not remembering she’s allergic to them. But most importantly, the scene is framed with Tony behind a desk toy, a double pendulum. A machine built to demonstrate the principles of chaos theory. Tony tries to make a case for himself, while also trying to stop literal chaos in his life, with the toy standing between them. Happy addresses his boss and Tony answers. But Happy is speaking to Pepper. Black Widow (introduced earlier as an object of Tony’s boyish proclivities and Pepper’s transparent jealousy) enters the scene now fully allied with Ms. Potts. An alliance shown by the fact that she now calls her Ms. Potts. Tony is left literally and metaphorically alone, unable to confess his current mortal status.

J.A.R.V.I.S. (in a much richer role) replaces Yinsen from Iron Man as Tony’s assistant, as he decodes his father’s work to synthesize the new element. Tony goes “back in hardware mode”, improvising a particle accelerator in his house and tearing up holes and defying the laws of physics more adamantly than a vibranium shield. At some point he conducts a laser towards his target. Cutting his house in half, and somehow not destroying the very same ducts he’s working with. The result is unobtanium. Tony’s no longer dying. Yay.

Justin Hammer dances like a monkey for the crowd at Stark Expo and the third act fireworks start. Black Widow gets a Hallway Fight ͭ ͫ, in as much as her cutting through half a dozen guys counts as a fight. Genndy Tratakovsky, world renowned animator (and actual Russian), was hired to draw the storyboards for the actions scenes, and it shows. Widow pulls a wire trick on someone’s neck she would later go on to try on Bucky Barnes with less success. She’s a muted Natasha, still to reveal her character to the audience, but all the building blocks are there and she moves gracefully, even though her action scene has a spotty sense of space and a dude we never see ends up hanging by the neck. Back at the Expo the final showdown includes a shot of War Machine shooting a drone in half while getting oil spilled all over his mask in true Samurai Jack style, while Tony cuts through mooks with lasers. Then Ivan arrives to whip some ass, moving in ways that suggest weight and style, and which would maybe have landed better if the movie had put any effort into building his character or giving his suit any distinguishing features beyond the whips.

The fight ends in the most Saturday morning cartoon way possible, with the heroes using an attack they discovered by accident in their previous fight, which is very lame.

Iron Man 2 may not be the first movie in the MCU, but it sure is the first that exists in a definite continuity by virtue of being a sequel. And the first one to fully incorporate connections into the future, even if they come at a cost. Even Garry Shandling’s Senator Stern later turning out to be HYDRA2 adds continuity value to this weird-ass experiment of a movie. Marvel now says that the kid in an Iron Man mask that Tony saves from a drone is a young Peter Parker. If you are one of those persons who place it at the bottom of their MCU ranking lists, I suggest you give it another watch. It’s probably better than you remember. It’s flawed, and sure, it promises to be about legacy and forgets about it. But there’s no other way to see Sam Rockwell dance in the MCU.

The Cutting Room: Jason Horton and THE CAMPUS Previous
AVENGERS: INFINITY WAR will be released a week earlier... Next

Alfredo is a Mexican Architect who doesn't enjoy being contrarian, despite appearances to the contrary. He enjoys words, visible things, and the unforgiving coldness of reality.