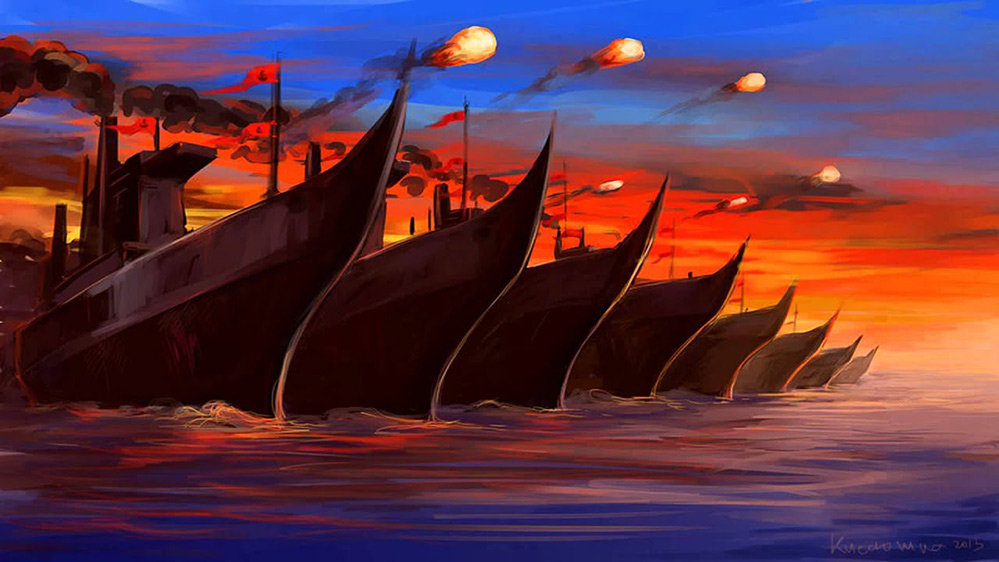 Avatar: The Last Airbender has returned to Netflix and has been topping the streaming charts for nearly a month now as folks check it out for the first time or snuggle up again with the fantastic series. Adored by kids and adults alike, this show remains popular even 15 years after its debut.

One of the key reasons this series remains a favorite of many is that the world building is so strong and rooted in things familiar while introducing the new and fantastical angle of elemental bending. For those unfamiliar with the series, powerful martial artists are able to manipulate or “bend” one of the four elements: earth, air, fire, and water. Nations formed around each element, and for a long time those four nations lived at peace – until the Fire Nation became imperial minded and tried to conquer all the nations under their rule.

The primary weapon the Fire Nation used to do this was their powerful and vast Navy. Now it would seem in a world where there are water benders, flexing most of your military might through your Navy would be a huge risk. Luckily for the Fire Nation (and unfortunately for the rest of the world) the Southern and Northern Water Tribes (the political factions of water benders) did not have a formal navy and their sole naval power consisted of fishing vessels. Hardly a match for the coal powered, ironclad warships of the Fire Nation.

These powerful Fire Nation warships are able to project more threat as they all carry several trebuchets, creating a force multiplier advantage over the other nations. The projectiles from the trebuchets become effective high explosive rounds thanks to the powerful fire benders in the Fire Nation fleet. The Fire Nation effectively used these fast, powerful ships to conduct lightning raids on Water Tribe villages, using the front mounted landing ramps on their ships to rush the shore of their foes after the trebuchet barrage. Defenders rarely stand a chance against the waves of Fire Nation infantry pouring from the ships onto land. These tactics used against the Water Tribes mimic the Island Hopping strategy used by the US Navy and Marines in World War II – except the Fire Nation doesn’t have separate landing craft, their warships pull double duty.

The Fire Nation Navy does have one great weakness however and that is air power. Throughout the series, Aang and his friends are able to elude and cause great damage to Fire Nation ships thanks to Aang’s air bending powers giving them the edge in the sky. The writers of Avatar: The Last Airbender smartly recognized this weakness and, while we never see the battle, the Fire Nation executed a sneak attack on the Air Nomads eliminating the greatest threat to the Fire Nation Empire – at the cost of the near total genocide of all air benders.

With the Air Nomads eliminated, the Fire Nation is able to bring most of the world under their heel. The Earth Nation and their mighty army stand in the way of total world domination, but the Fire Nation rules the sea. This naval supremacy throughout the series always gives the Fire Nation an almost insurmountable edge to be a great foe for Aang to overcome. Aang and the ragtag resistance of water and earth benders always feel outclassed by the Fire Nation and their navy. This is a very realistic element in this fantasy world as history is littered with nations able to project dominance thanks to naval supremacy (Carthaginians, Renaissance-era Spain, the British Empire, and the modern US Navy).

1st Generation Cruiser – the smallest of all the Fire Nation warships we see. This is the ship we see Prince Zuko using in his hunt for Aang in the first season. Zuko’s ship is the only of this type we see during the time period the series takes place, but at least one more is found frozen in the ice during one of the first battles with the Southern Water Tribe. This ship has the signature front landing ramp that we see incorporated in later and larger ships.

2nd Generation Cruiser – this is the most common and most numerous ship we see in the Fire Nation Navy. Much larger than Zuko’s ship these ships carry three trebuchets able to fire explosive ordinance as well as a large contingent of Fire Nation soldiers for amphibious landings.

Empire-Class Battleship – first seen as Admiral Zhao’s command ship during the invasion of the Northern Water Tribe. Approximately twice the size of the Fire Nation Cruisers, this ship also appears to lack the front landing ramp and replaces the ramp with an orante and vicious looking ram on the bow.

Royal Barge – we only see one of these in the series, being used by Princess Azula. Massive and I’d wager similar in size to an Empire-Class battleship, however we never see them side by side. This ship is menacing and very ornate, but does appear to be lacking any artillery or other naval weapons. That said, nothing travels in more style than a menacing ironclad packed with some of the world’s most powerful Firebenders escorting a member of the royal family.

Southern Raider Frigate – In the episode “The Puppetmaster” (s3:e8) Katara meets an elderly water bender from the Southern Water tribe who was captured in the early days of the war, when the Fire Nation strategy was focused on capturing all the water benders from the Southern Tribe utilizing lighting quick raids. These frigates appear to be custom made for this particular mission, sleek, fast, and adorned with beautiful and intimidating red piping on the hull. These ships appear to be further specialized for their South Pole mission, each equipped with large ice breakers on the front bow.

Ultimately the Fire Nation and their Navy are defeated. Their downfall is a combination of the efforts of allied forces using water and earth bending while assisted by Aang as a fully realized master of all four elements. The defeat of the Fire Nation is cathartic and a thrill ride to watch as some plucky underdogs take out a truly formidable and world class Empire. We all love stories where a mighty and evil foe is defeat by the forces of good – something we could all use in our reality, but I’ll take a little comfort in an Avatar: The Last Airbender rewatch.

Kyle B. Dekker is a playwright, filmmaker, performer, and Marine Corps Veteran in Minneapolis/St. Paul.