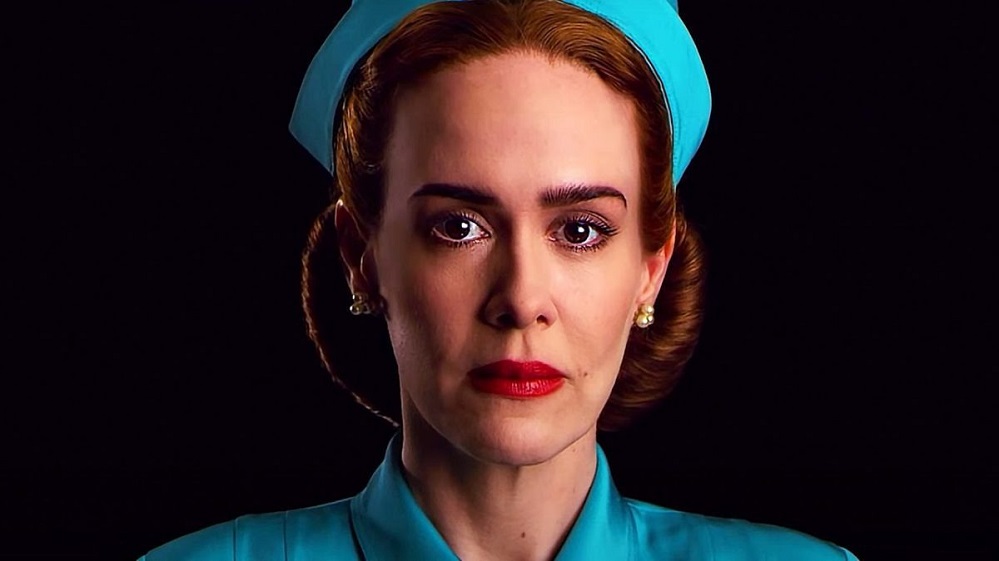 Reading pans of Netflix’s new glossy queer period piece from the house of Ryan Murphy, Ratched, it’s hard to disagree with almost anything anyone has said. Every element these savvy genre busters pick apart is present pretty much as laid out, and their general theses, that it’s a poor prequel to Milos Foreman’s 1975 film adaptation of Ken Kesey’s 1962 novel, One Flew Over the Cuckoo’s Nest, is pretty much right on the money. But having recently devoured Ratched in a two day span and enjoyed every sloppy, greasy minute of its junk food goodness, I’m reminded of a line from Roger Ebert’s famous intro to his review of the 1999 Brendan Frasier Mummy: “There is hardly a thing I can say in its favor, except that I was cheered by nearly every minute of it.”

One Flew Over the Cuckoo’s Nest —Spoiler Alert—is a more cynical version of the premise of Cool Hand Luke, that of a regular Joe facing off with the rules and rule-makers of an uncaring bureaucracy. The film sees Jack Nicholson as Randle McMurphy, a redneck who cons his way out of a prison sentence for an act of statutory rape and into an asylum instead. Mildred Ratched, the head nurse whose iron grip rules over the male patients in the hospital, fills in the Strother Martin role: she and McMurphy definitely have a failure to communicate. McMurphy engages in acts of defiance that keep escalating until he and Ratched have a blow out over a party he throws where she berates a young patient into suicide for losing his virginity during it. McMurphy nearly strangles Ratched to death in revenge, and she has him lobotomized; in the end they both lose. McMurphy’s rowdy candle has been snuffed and Ratched’s control over the hospital has been forever broken.

In the book and movie Nurse Ratched is hardly a character—she’s the representative of a grinding, rules-bound, cruel and faceless society more than a woman. In the world of evil nurse characters, she’s not even a patch on Misery’s Annie Wilkes in terms of being fully fleshed out. Her backstory in the novel amounts to a sentence or two about her having served in WWII—but it’s her sing-song method of dealing with grown men, talking down to them like five-year-olds, that defines her. It’s her those-are-the-rules view of her job that defines her, even as those rules hurt and stifle the very people she’s purportedly there to be helping. She’s a stand-in, a woman only because her sex is an even more egregious thing to lord over her male patients, a nurse only because hospitals have nurses. What she isn’t is the type of character we can imagine going home after work, heating up a TV dinner for one, petting her cat, and guzzling half a bottle of wine in the bathtub while she thumbs through her paperback of V.C. Andrews’s latest book. When her shift ends and she goes off duty in the story, she might as well exit the world altogether.

With that said, that leaves us trying to figure out just what in the hell Ratched is and just why all the critics who watched it and tried to slot it in as a true “prequel” were wrong. Allegedly, besides a first-timer’s clueless spec project, it’s a forerunner to the events of the book and movie. What it’s not is any of that besides the spec script aspect—nothing in Ratched could or would lead up to the brutal story about banal, insipid evil that can and will destroy us all, smiling all the while. Almost nothing about Murphy regular Sarah Paulson’s (surely arm wrestling Jessica Lange for most appearances in Murphy projects by this point, if not outright trouncing her) Nurse Ratched matches up to Louise Fletcher’s Oscar-winning character. Even her hair is different enough that it’s only vaguely reminiscent, flatter on top, far longer in the back, sort of representative of the series as a whole.

So then just what is Ratched? It’s pulp. Pulp in the crassest, trashiest tradition of pulp. Great, you say, so what’s pulp? Pulp is a catchall term referring to the type of dime magazine that used to be sold at newsstands in the interwar period. Pulp existed in the early twentieth century, a type of magazine that came out between the Victorian era’s dime novel (or the penny dreadful in England), a broad, cheap type of book that would tell often made up adventures about all-too-real people like Wyatt Earp or Bat Masterson and the four-color comic book of the late 1930s. The name “pulp” came about because of the cheap newsprint pages these slapdash magazines were made out of and the stories within became known as—wink wink, Quentin Tarantino—pulp fiction. The great pulp magazines, Black Mask, Amazing Stories, Weird Tales, and several others told all sorts of stories: crime, suspense, horror, science fiction, and so much more, always over the top, often wryly funny, engrossing and like Shakespeare’s best, projecting to the cheap seats. It’s where fantastic characters like The Shadow and Doc Savage and The Continental Op came out of, and where readers first caught glimpses of Lovecraft’s Miskatonic University and witch-haunted Arkham or Bradbury’s adventures on that great red planet, Mars.

It’s also where less savory stories were told: cheap, lurid tales with sexy covers. Pulps, if not featuring bubble-helmeted space men or various racist-themed villains scheming alongside skulls and tarantulas, would feature tough looking men in the Jack Palance mold, square-jawed, clutching a gun in either fist and half-silhouetted by the open door they invariably stood in, while a sexy woman reclined in lust or fear—her dress half torn off in either case—in the foreground. They promised sex and violence and crude, cruel adventure. Sometimes they even delivered it which was all the better. It didn’t matter, though, not really. What mattered was being entertained and pulp, propulsive and moving ever-forward, whether it became a classic or not, knew how to keep readers turning pages and coming back month after month.

As pulp magazines gave way to pulp novels—that is to say from issues full of short stories to sustained, cheaply sold novels—so too did those who’d never had a real voice get to try their hands (often pseudonymously) at telling stories about people nobody else told stories about: gays and lesbians became featured in their own lusty novels, with the same splashy covers advertising their sexy, sultry tales. In Ratched’s case we’ll focus on the lesbian pulps. Now instead of a square-jawed man dominating the scene with two penis-substitutes clutched in either hand, they featured women: women in bedrooms, women taking off their clothes, and if there was a man anywhere on the scene they played second fiddle to the action going on with the ladies in the foreground, standing around limp and soft-shouldered, what they could have offered not needed in the stories being told. Exploitative as these stories were—and they were exploitative as hell—they were also explorative. People who saw themselves represented nowhere else in mainstream society saw themselves represented in these novels and they clung to them like drowning people cling to life preservers. Ratched, as lurid pulp, fits exactly in with these post-war exploitative, explorative sex romps, essentially making up its Mildred Ratched from scratch. It’s from deep within the tradition, even if by accident of sheer cultural osmosis. In fact, if anything would sink the promised second season of the show, it’d be in trying to come back around and fit with the book/movie. Being its own strange take is Ratched’s strength.

It not only gives our nefarious nurse a backstory, but any story whatsoever, using this essentially blank slate to tell a nightmare about the incompetence and cruelty (intentional and un-) of America’s psychiatric institutions in the mid-20th century and of a budding lesbian realizations about herself. Along the way the series tacks on scenes straight out of Thomas Harris’s Hannibal, features a literally hard-boiled detective, gruesomely delves into every bit of psychotic psychosurgery, and has every type of clichéd lunatic represented all in it’s efforts to not only put these stories out there, but to make them entertaining. Entertainment, the underfed aspect of any of these types of stories, is the key aspect here. We see how Black audiences turned out for Black Panther (which was good, so no angry tweets as if I’m slandering the quality) after decades of Black stories being slave narratives. In the same way Ratched is gays and lesbians getting to do something other than feature in tragic, cozy melodramas made for straight people to sup upon our grief and pain and loneliness. Simply put, Ratched is entertaining in spades.

Is it great? That’s another question altogether. FX’s Fargo, for example, is great pulp. The heightened crime drama is doled out in bombastic weekly episodes with witty dialogue, sparkling characters, and over the top situations that stretch reality but don’t break it. It’s the type of show that’s of a piece with Hammett or Chandler, two pulp vets who went on to try their hands at that fabled beast, The Great American Novel, and succeeded to varying degrees. Ratched doesn’t reach that high—Ratched reaches for those lurid books the newsman would have hidden behind sheets of cardboard at his stand, but like the best of pulp it’s propulsive, entertaining, a thing you can’t tear your eyes from even if you sometimes roll them as events unfold. Sometimes that’s enough.

Ultimately, that’s where everybody got Ratched wrong. They were judging it as something elevated, their knowledge of pulp—which I’ve barely scratched the surface of here—nonexistent, so they had no baseline by which to judge the show. They slotted it alongside every other hunk of glossy, post-peak TV and for good reason: when something has tons of money, looks shiny, and has a stacked cast it’s easy to confuse it with the very best of shows out there today. This isn’t like the ‘80s or ‘90s when you could tell a cheap show because they had that really shot-on-video quality and the casts were made up of unknowns with maybe a That Guy or That Gal anchoring it with a wink at legitimacy. Sometimes those shows became fan favorites, most of the time they were stepping stones for the cast getting onto what was treated as “real” TV.

TV today has circumvented that, everything having a level of competency to the look and feel such that it’s easy to get tricked into watching some real trash before you realize it’s trash. Ratched isn’t great, but it’s pedigree pulp and fun for being not-great. It’s clever enough, gory enough, sexy enough and it moves. Ratched might not be played on stages 500 years from now, but for something only 8 episodes long, I’m sure William Shakespeare would have had a hell of a time watching it.