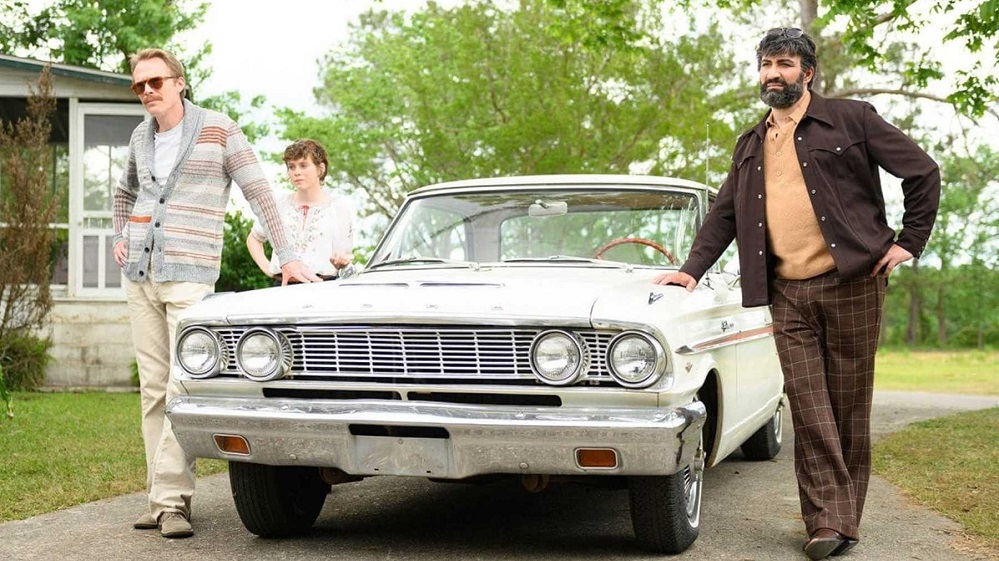 Uncle Frank — the latest from Alan Ball, Oscar winner (American Beauty) and HBO show creator extraordinaire (Six Feet Under, True Blood… less so Here and Now) — is a film about repression, patriarchal trauma, sexual identity, addiction, familial strife, the complexities of interracial relationships, depression, and the toxicity of “traditional values.” If this sounds like a lot to cover in 95 minutes, you’d be right. Ball’s film touches on all of these subjects, but bounces around them in clumsy, surface-level fashion. It’s an admirable attempt by Ball to tackle all of this at once, but it’s a film weighed down by its reliance on broad caricature and thinly sketched characters.

Set in the 1970s, Paul Bettany stars as the titular Frank, a gay man who escaped his South Carolina family and is now living in New York City as a professor of literature. He encourages his niece Beth (Sophia Lillis) to become her own woman and attend college despite her southern family adhering to less feminist ideals. Midway through her first semester at the university Frank works for, they receive news of the death of Daddy Mac (Stephen Root), Frank’s father and Beth’s grandfather. Frank is still closeted among his family — he pretends to have a live-in girlfriend — which makes his boyfriend’s (Peter Macdissi) insistence on going with him a massive complication in an already strenuous situation.

The cast in Uncle Frank, despite the lack of depth on the page, acclimate well to their parts. The always underrated Steve Zahn gets very little to do but he (and his mustache) still manages to bring some color to his part. Same goes for the ever-wasted Judy Greer, shockingly filling the role of “protagonist’s mom” which she’s been relegated to for the past decade. Margo Martindale is always a joy to see, and this is a character that she can play with gravitas in her sleep. Stephen Root gets very little to do other than exude seething contempt with every breath, but he does just that. And Ball favorite Macdissi is charming and having a lot of fun as Frank’s lover Wally, while also finding a deep sadness in his character that the character as-written is lacking.

Bettany1 and Lillis in the leading roles are equally compelling, with Bettany giving one of his career-best performances. Frank’s slow depressive decline throughout the film (heavy-handedly accentuated with flashbacks to his troubled relationship with his father in his youth) is masterfully handled by Bettany. He manages to not overplay his character’s trauma and alcoholism, depicting a man on the edge who is still trying desperately to carry himself as keeping it together. Lillis’s Beth sadly is overshadowed by Frank and Wally during their road trip, but her youthful energy contrasts well with Bettany’s broodiness, and they have undeniable familial chemistry together from their very first scene. Beth opens by saying that Frank is the only member of her family that makes her feel seen and heard, and every scene they share together makes this abundantly clear.

Of the two streaming directly into your homes this week, Uncle Frank is the far superior Yokel Safari, in that it’s acted with more grace, far less offensively caricatured, and directed by someone who has genuine empathy for its subjects. It’s not subtle — the film reaches its climax with a will-reading that’s as nuanced as a bagpipe — but the performances are. And having subsequently watched the afore-linked atrocity that is Ron Howard’s Hillbilly Elegy, I’m finding myself feeling far kinder to Ball’s shallow, but good-hearted, film. Ball, a gay man who was raised in Georgia, at least has some authentic underpinning that California raised Ron Howard lacks when dealing with rural Ohio and Kentucky. That said, it’s an extremely flawed film, with Ball’s reliance on eye-rollingly loudly-executed emotional manipulation suffocating the incredible performances of Uncle Frank’s stars. Paul Bettany’s acting in the titular role deserved a much more interesting and fleshed out film. One has to wonder if Ball would have been better served by making this story a series, rather than a film.

Everyone's Wrong About Ratched Previous
Review: HALF BROTHERS Next