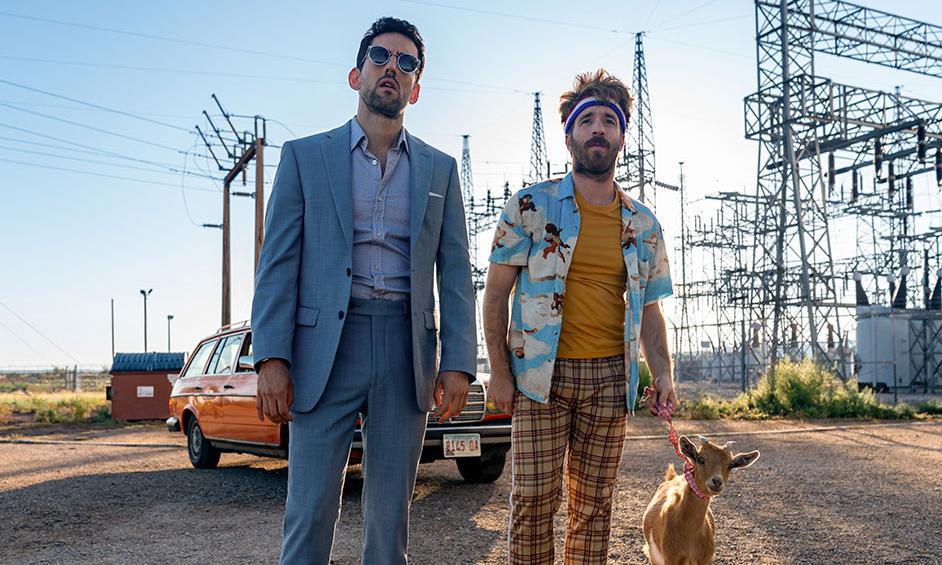 There’s nothing more exhausting than comedy that doesn’t work for you. It just becomes an exercise in tedium, particularly if there’s no easy escape out of it.1 Enter Half Brothers, the newest film from Luke Greenfield, the mastermind behind such films as Rob Schneider’s The Animal and The Girl Next Door.

It’s a film about Renato (Luis Gerardo Méndez), a Mexican airline executive whose father left him as a child to find work in America, never coming back. He gets a call from his father’s American wife that he’s on his deathbed and he visits him, learning that he has a half-brother, Asher (Connor Del Rio), and that his father (Juan Pablo Espinosa) would like to send them on a scavenger hunt—something he did all the time with Renato as a young boy—to explain why his relationship with both men was strained. The two brothers, one a c-suite suit with repressed emotional baggage and the other a slacker societal dropout desperate for validation, decide to go ahead on the road trip adventure despite their loathing for the other. Along the way wacky hijinks occur—like stealing a goat and getting high on gaseous alcohol—and life-long trauma is addressed… Neither of which are particularly compelling.

Half Brothers is just a never ending deluge of dire, lazy humor. The film makes a point of (rightly) calling out American—and by extension, American cinema—reliance on stereotypes of Mexico and Mexicans, but then responds in turn by making nigh every American character a caricatured punchline about how fat, stupid and self-absorbed we are. It’s particularly jarring because the targets of these jokes are people like Uber drivers or people working menial jobs, which isn’t exactly “punching up.” It wouldn’t be such a problem—Americans can afford to take some jokes at their expense—if it wasn’t so bluntly unfunny. It’s the equivalent of someone like, say, Bill Maher making fun of poor people for being fat, but it goes on for ninety minutes. Even the bits that aren’t targeted just wind up being Capital-W Wacky and don’t register because it also wants to be sweepingly sentimental.

Which is another major problem with Half Brothers. It’s saccharine in a way that wouldn’t work in a drama film, but it clashes even worse in a dumb odd-couple road trip comedy like this. The familial drama was inevitably going to be a syrupy affair, but the way it goes about it is so overwrought that it reaches absurd heights. Every time the brothers come closer together and a new aspect of their father’s story comes to light, it’s almost eye-rolling in how on-the-nose and exhausted it is. Flavio’s politically charged backstory throws all subtlety to the wind, and both stories are too neatly tied in a bow for the emotional blows to have any real impact.

It’s a film that leans too hard into mean spiritedness and overbearing melodrama without any balance. It teeters between ironic distance and mawkish earnestness on a scene-to-scene basis. The formula for these types of films, is followed pretty much to a T, which means there’s basically zero surprise here. It’s just an endless repetition of annoying infighting between the central pairing, contrasted with their father’s Very Important narrative about being an illegal immigrant in America. Whether it’s going for humor, charged messaging or just sappiness, none of Half Brothers works. The goat is pretty cute though.