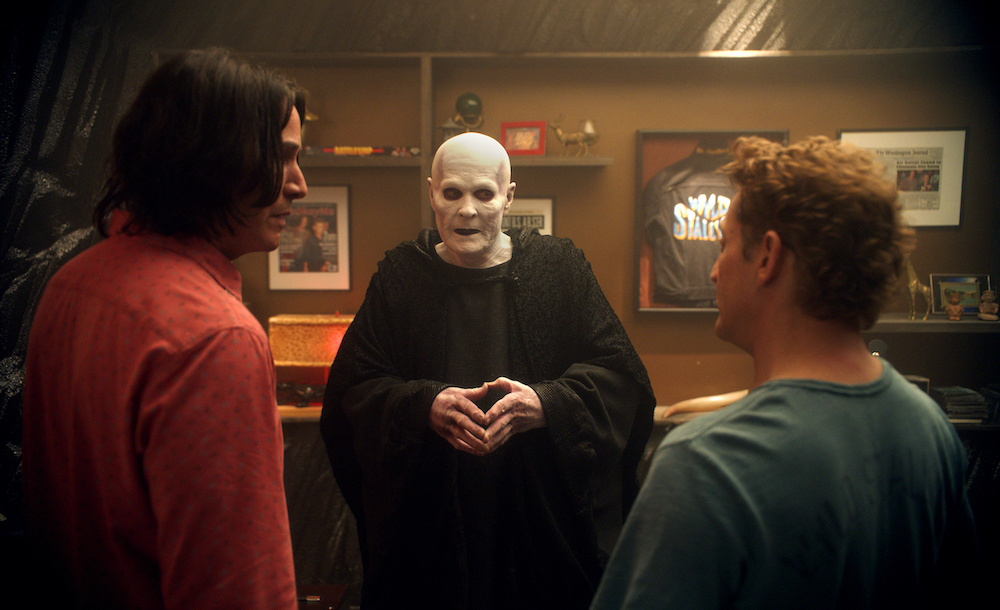 The credits rolled on Bill & Ted Face The Music last night at the exact moment I learned of the death of Chadwick Boseman. The experience was akin to being abruptly struck at the end of a 90 minute span of wide-grinning, hopeful joy.

I’m not here to talk about Chadwick Boseman’s tragic passing, or his wonderful and budding body of work. But I mention this fact because it’s so representative of this year in a lot of ways. 2020, seemingly more than any of the previous few years, has seemed to be a constant push and pull of horror and atrocity bashing their way in between the cracks of what little joy or comfort is to be found in even the barest frivolities. We seem to be under siege at all times from the darkest corners of our shared modern trauma. It would be comforting to think of the fraying of our society being the work of some existential, outside force that threatens us as a collective, but what’s become crystal clear over the past year especially is that so much of the darkness we face is of human design and making. It’s from within. And we’re all fighting so hard to keep it at bay. To find an answer to all the pain.

If that seems a bit heavy for a review of the third movie in the Bill & Ted saga, Bill & Ted Face The Music would tend to agree with you. Coming almost 3 decades after Bill & Ted’s Bogus Journey saw our heroes overcome evil robots and befriend Death himself, Face The Music picks up in the midst of decades of potential pursued, yet unfulfilled. Bill S. Preston, Esq. (Alex Winter) and Ted “Theodore” Logan (Keanu Reeves) are chugging along as amiably as ever, trying to compose the song that will unite the world as foretold hundreds of years in the future. Their fame is long behind them and they have little to show for their efforts but the families they’ve built alongside each other during a lifetime of unwavering friendship. But the strain of this 30 year grind on their wives — the princesses rescued from history in Bill & Ted’s Excellent Adventure — has begun to fray the fabric of those families. While their teen daughters — Billie (Brigette Lundy-Paine) and Thea (Samara Weaving) — idolize them, Elizabeth and Joanna have spent years supporting the duo, and wondering whether their ties can withstand Bill and Ted’s total devotion to the music, and each other. Bill and Ted begin to question whether they are sacrificing the love of the present for a future that seems unattainable.

This hint of melancholic regret and anxiety is the perfect spice for what is essentially one of the most baldly hopeful and earnest franchises ever created. Bill Preston and Ted Logan are characters who have never once experienced an interpersonal conflict. A couple of friends who have faced every adversity with the same positive attitude and genuine love for others since they were kids, eschewing the mere possibility of failure and heartbreak because the alternative is unthinkable. And while this kind of attitude is admirable, it’s also led to a constantly building strain in their lives, due to the fact that those around them continue to move forward, while they desperately work to fulfill a destiny that is elusive. Being the unstoppable optimists that they are, they bang their heads against the wall in effort, only to come up short again and again. Their latest effort1 may be a pretty awesome song, but its composition is so labored and excessive that it’s the perfect example of their predicament. The boys receive a serious wakeup call from emissaries of the future that unless they compose their song and get it to the universe in the next 77 minutes, their families and the very fabric of the universe will explosively unravel around them.

This is where the film really starts to play with its themes. While Bill and Ted frantically search for a quick answer, progressively visiting more desperate and desolate versions of their future selves for the song (and finding only contentious dickweeds), Billie and Thea race to assemble a band of historical power to back the dudes upon their return to the present. The difference in the approach illustrates the theme of the film perfectly. Bill and Ted are convinced that they can find the perfect answer if they just try hard enough and don’t give up. They traverse multiple futures where their increasingly threatening and unstable selves attempt to plead, cajole, bargain, assault, and manipulate them into dishonest or even dangerous solutions. Whereas Thea and Billie choose to use their encyclopedic knowledge of music to inspire history’s greatest musicians — Jimi Hendrix, Louie Armstrong, Mozart, Ling Lun, the cavewoman Brom, and Death himself (William Sadler in his best turn in the trilogy) — to contribute to a legendary ensemble for the fate of the world. When Bill and Ted find that their plight has accidentally caused a future murderbot to send their daughters to Hell they finally learn that, “maybe we should always not know what we’re doing” is actually a pretty righteous refrain. With the band united, Bill and Ted must achieve their ultimate destiny in helping to unite the world under the banner of being excellent to one another. Because ultimately, we as individuals (or duos) control nothing, no matter how hard we try or how pure our intentions. The song that saves the world is a nice McGuffin, but what truly unites people is inclusion and feeling. You can’t compose peace and understanding. You can only inspire it in those willing to take part. As the wizened old-timer Bill and Ted tell our heroes, “It’s the answer to everything… It’s in your hands now. Go make it happen.” Bill and Ted have to find a sense of understanding themselves as individuals in order to properly value the things that inspire them to make great things happen. Real art is built from the lives we live, not our ambition or effort. And art is what will inspire the generations to come to try to build a better and more outstanding world, if we love, trust, and empower them.

The nature of long-term sequels to comedy classics lends to the expectation that they’ll be, at-best, disappointing hang-sessions with actors we like, amiably shuffling through stitched together improv sessions — Films found in the edit, released, and forgotten. Bill & Ted Face The Music is clearly a labor of love, years in the making and benefitting from an actual script. Longtime friends Ed Solomon and Chris Matheson imbue the proceedings with a wholesome earnestness and a triumphant sense of celebration, which is hilariously and tenderly brought to life by Keanu Reeves and Alex Winter. Reeves and Winter bring an earned self-awareness to the good-natured leads that allows the film to benefit mightily from the intervening decades. Dean Parisot ably assembles these delightful performances with a sense of pace and catharsis that has become more and more rare in the post-Apatow landscape of comedy. I’ve watched this film twice at this point, and I’ve been surprised at how my appreciation for it has grown. The last 10 minutes of this film (which I have watched at least five times) never fail to put a smile on my face and a lump in my throat.

This is a film that is diametrically opposed to ennui and cynicism. As a life-long fan of Bill & Ted, I can’t imagine a more heartfelt, appropriate sendoff for our excellent friends. And in a time where modern life feels omnipresently oppressive and dour, the sweetness and humanity of the Preston and Logan families has fortified me more than I’d ever have expected to face the troubles ahead with a kind heart and the desire to be excellent to others.