Review: WAR FOR THE PLANET OF THE APES 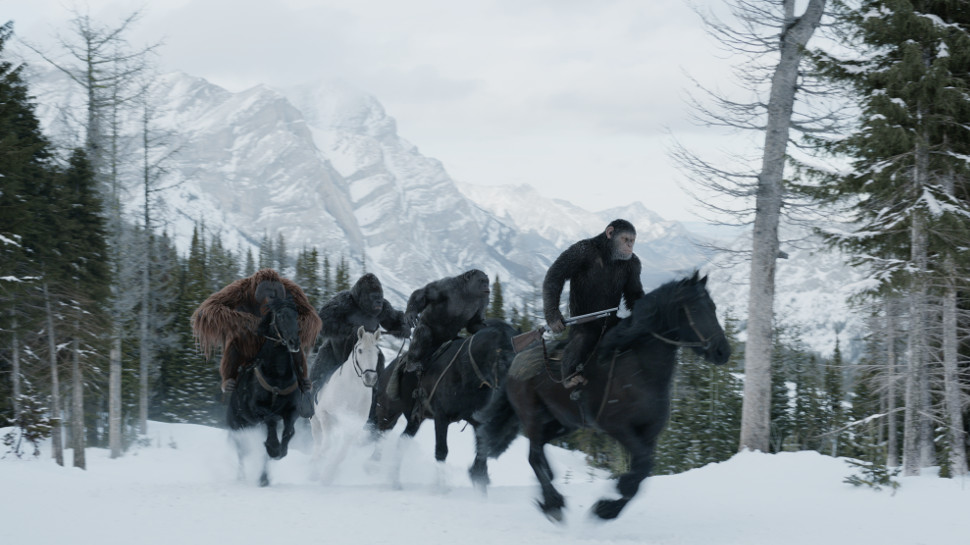 2001: A Space Odyssey starts with the now-immortal image of the earliest form of humanity: An ape, using tools, which excites and inspires all the other apes. We don’t learn much about the ape’s story in the movie (The fascinatingly different novel version calls him “Moon-Watcher”), but the movie is all about that kind of ascension.

Rise of the Planet of the Apes had an involved, personal version of that same ascension acted out by Andy Serkis’ legendary performance as Caesar the chimpanzee, but things didn’t end with that movie. The last movie in the trilogy Rise started, War for the Planet of the Apes is still giving the heroic little tribe of superintelligent apes more involved moments of advancement, woven so well into the story you may not even notice. One that floored me in its cleverness and simplicity: Caesar, longtime leader of the apes and rocked by too many tragedies to count, has bad dreams. 1

That’s the best way to describe War, in fact: The nightmare of a benevolent king, watching the world he (and we) recognized fall further away from his grasp. Rise was all subtle, emotional sci-fi, and the middle chapter Dawn was going for a grim, post-apocalyptic, simian version of Shakespeare, but starting from the opening text War plays off our knowledge and our expectations in a way that reminds me of folktales, or myths, or the even oral tradition – though maybe it’s “sign language tradition”, since most of the apes still prefer the simple, easy-to-understand signing to their limited human speech faculties.

But I digress. The movie looks stunning: Matt Reeves makes the environments just barely too beautiful to be real, using the bright setting sun and mountaintop snowstorms and the foliage of the forest to rob you of a sense of place. The apes have abandoned their San Francisco home from the previous movies, human culture falling so far away that the remnants of the real world we see feel like bubbles in the ether of an unformed world.

This is part of the progression we’ve seen since Rise, where the apes had next to no sense of identity or personhood in the world of the humans: the sun has set, we’re on the other end of the arc. Humans are no longer the dominant species, and they know that, but the movie does too, letting our species recede into something approaching a background texture of “The enemy”. I can think of a half-dozen humans in the movie who get something even approaching a moment of character: The human race is gone, these people are just a mass of dying flesh, marching and praying and hating in formation, frantically trying to reclaim a world long gone.

If you take a look around the site, you’ll see this is actually some of the subtler political commentary in the Apes movies.

Caesar’s apes have been waging a bloody and tiring war against these humans, that he’s been trying in vain to end in any way he can. The movie starts with him formulating a plan to abandon their jungle stronghold for good and make for uninhabited land across deserts and mountains, but the humans attack that stronghold before the plan can be put into action. Caesar has to set out on horseback with his little band of ape leaders, who get their biggest roles yet here. How did the humans finally find the apes? Turncoat apes, working with humans out of fear and spite and pride, another one of those fascinating moments of advancement I was talking about.

The turncoat apes are only called “Donkeys” – take a few seconds, you’ll get it – and this is part of what I mean about how the movie plays on our cultural expectations. There are so many moments meant to make you think of specific war movies, or post-apocalypse movies, or even just non-uplifted apes, and it adds a texture that makes the movie feel grander than the previous movies, which have stood so completely alone in the annals of culture.

Take the unnamed balding ape played by Steve Zahn, who’s introduced in a sequence that segues from The Searchers to Kubrick’s Shining. You expect someone unhinged, solitary and battle-hardened, and that’s what you get, but that character is also the movie’s comic relief, and even its moral center in some ways.

The movie is ten times funnier than the very maudlin Dawn – there’s one scene in particular that rivals the beans scene from Blazing Saddles in how highbrow it is in going lowbrow.

That eclectic mix of roles befits an Apes movie well. It’s always been such a self-contradictory franchise, such rarefied and hard SF blockbusters filled with jokes about monkeys and huge, crazy action. Look at Woody Harrelson’s Colonel, the grim, taciturn and sadistic leader of the human armies: Between his narration in the trailers and his movie-monster presence, he’s given more fearful buildup than Darth Vader and Colonel Kurtz put together (a pretty good summation of how Harrelson plays the character) but the first thing he says to Caesar when they meet face-to-face is a genuine, hesitant apology for his brutality.

It works, is the important thing, it all works – thanks in huge part to Michael Giacchino’s phantasmagorical score, peppered with the same kind of strange levity as the events we see. Reeves and co-writer Mark Bomback know the characters and their world inside and out, and find the perfect uses and endings for everyone from Maurice the wise orangutan, to Caesar’s baby son from the last movie, to Caesar himself, to the very Planet of Apes 2 we’ve been following for three straight movies.

The very first teaser for the movie – the above image – just about sums it all up. It’s some heavy, Biblical stuff.

This is good enough that I expect it to easily make sequel-justifying money, and there’s definitely room for more movies if you wanted them, but I don’t: I feel this finished this very minor-key trilogy of blockbuster movies on the best possible major chord. Nothing lasts forever, says War, especially not dreams, so why should this dream?

Planet of the Racists Previous
Things We're Digging This Year Next