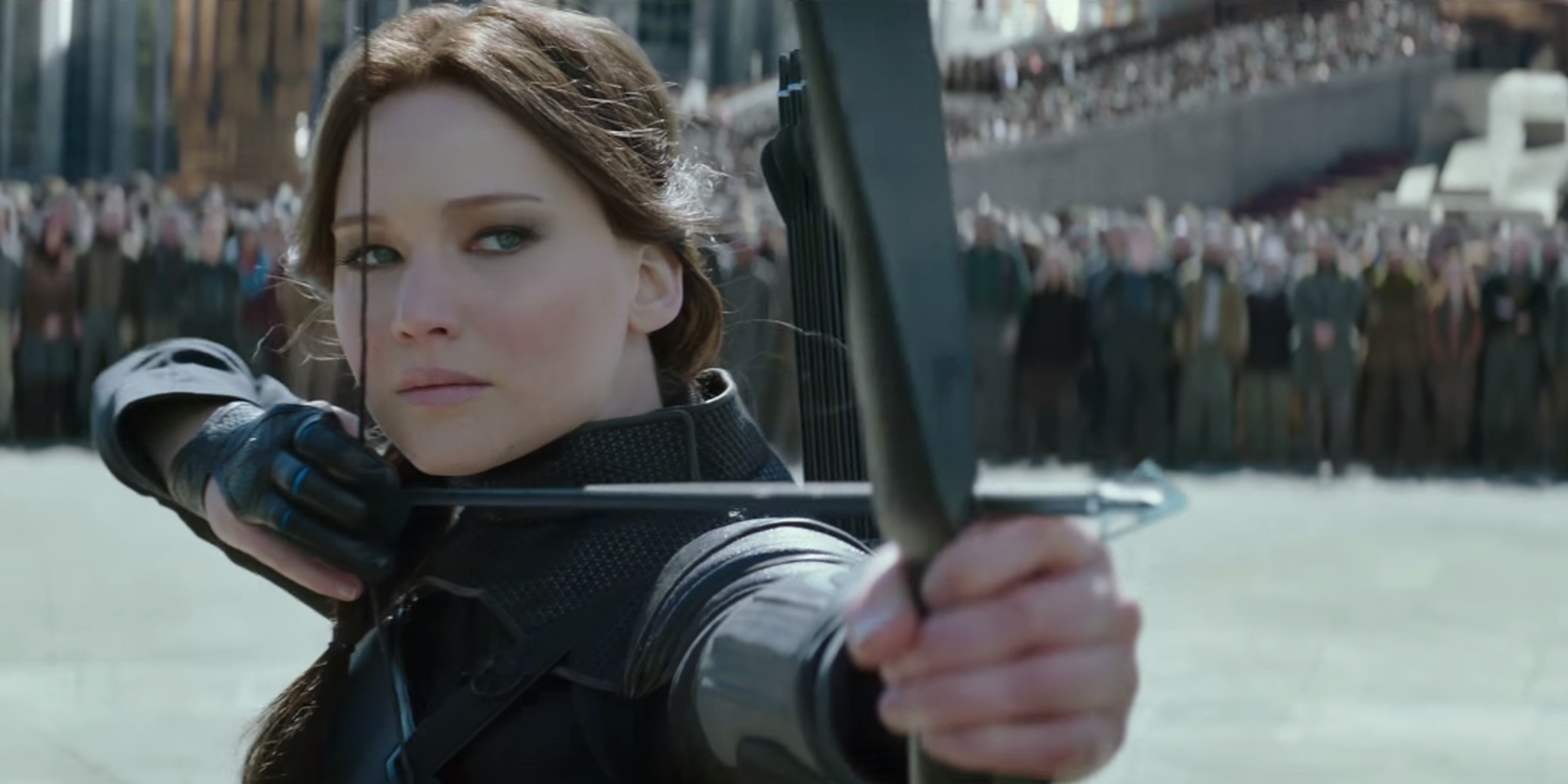 “The initial, personal cause of his grievance against the universe can only be guessed at; but at any rate the grievance is here. He is the martyr, the victim, Prometheus chained to the rock, the self-sacrificing hero who fights single-handed against impossible odds. If he were killing a mouse he would know how to make it seem like a dragon. One feels, as with Napoleon, that he is fighting against destiny, that he can’t win, and yet that he somehow deserves to. The attraction of such a pose is of course enormous; half the films that one sees turn upon some such theme.” – George Orwell, review of Mein Kampf

The Hunger Games is the story of a poor, largely white majority living a simple, rural life and dressing simply and modestly, who are oppressed by a snobbish, intellectual, wealthy elite living in a faraway city, who dress in outlandish, colourful, non-traditional fashions. If this sounds familiar it’s because it’s the exact narrative of Donald Trump voters who see themselves fighting a populist battle against a corrupt liberal elite and their unnatural lifestyles, and so voted in a man presenting himself as an outsider taking on the establishment.

This narrative has no relation to the struggles of real oppressed minorities, particularly in America. Before the revolution begins all the threats the characters face come directly from the government and its army of faceless Stormtroopers, and no-one ever has to worry about their friends selling them out to the Capitol. However, if you’re in a real-life oppressed minority your main immediate threat is not the distant government seeking you out themselves, but your own neighbours turning you in to the Gestapo or stringing you up from a lamppost themselves.

The Hunger Games is a white fantasy of being oppressed so you can daydream about overthrowing your perceived oppressors. Every major character is white: Katniss, Peeta, Gale, Snow, Coin, Haymitch, Effie and Plutarch, and while there are a few minor PoC characters they rarely feature prominently in more than one film. This fantasy has nothing to do with fighting against the establishment of a brutal dictatorship, but instead is about people who believe they have lived in one for a long time fighting back against it. This fits well with the American right who see decades of civil rights victories as a slow degradation of their country, and voted for Trump in the hope that he’ll overthrow the entrenched system.

This series’ narrative also deliberately presents itself as apolitical. No character has any defined political opinion; we never learn what Snow believes in or what his government stands for besides evil, and Coin’s vision for her post-revolution world is never touched upon. Katniss herself is barely interested in the future of Panem, after the revolution starts her main goal is to find somewhere for her, her family and her boyfriend to live away from the political struggles of the world. After assassinating Coin she ducks out of the world she helped create, and we only get the barest glimpses of what this better world actually is. This vagueness lets the audience project their own political views onto the story. A left-wing viewer will see a leftist revolt against an autocratic fascist regime, while a right-wing one will see a conservative, traditionalist revolt against a corrupt liberal establishment.

There’s been a lot of talk about the normalisation of the worldview and ideals of Trump’s supporters in the wake of his victory, and The Hunger Games is a major example of this. For the last seven years America has been absorbing itself in this story while congratulating itself on how progressive and forthright the series is, so its narrative is now widely accepted even among Trump’s enemies. The real question after all this is not how could Trump win, but how could he not?

Right-wing narratives like this are very common in modern YA fiction. The 5th Wave is probably the most extreme example. This movie literalises the American survivalist mindset, made famous by the extreme right wing militia movement in the nineties. It’s based on the belief that the world will imminently collapse and be taken over by an insidious one world government who will send the military to round everyone up into camps, and that the best way to survive is to hide away in the woods with stockpiles of food, survival gear and guns. In The 5th Wave a group of white heroes (and a few token people of color) are forced to flee into the wilderness after the New World Order UN Jews Aliens take over the world, and after briefly living in the very picture of a ‘back to the land’ survivalist community are rounded up by the army who want to drag the adults away to FEMA camps. The whole thing feels like if Alex Jones wrote a YA novel.

The film’s most interesting element is just how much it fetishizes firearms and gun ownership. The heroine’s independence is symbolised by her possession of guns. Her autonomy after her dad’s death is represented by picking up an assault rifle, and the power relationship in the house she wakes up in after the love interest rescues her is shown by whether she does or does not have access to a gun. The guns themselves (quintessentially American ones like the M4 and M1911) are filmed more fetishistically than in an advert, every shot communicating to the audience just how sexy and powerful they are.

Dystopian narratives often play a significant propaganda role in both radical and mainstream politics, and can be seen as a secular analogue of apocalyptic religious texts. Dystopian revolutionary stories emerged in the nineteenth century in the genre of anti-Tom literature, pro-slavery stories that sprang up in response to the immense success of Harriet Beecher Stowe’s anti-slavery novel Uncle Tom’s Cabin. Stories like A Sojourn in the City of Amalgamation by Jerome Holgate and Wild Southern Scenes: A Tale of Disunion! And Border War! by John Beauchamp presented visions of the future in which interracial marriage was mandated by law and gangs of feral black men terrorised the countryside.

Similar right-wing dystopias proliferated throughout the twentieth century, in such books as The John Franklin Letters and, most infamously, William Luther Pierce’s The Turner Diaries. The latter, a neo-Nazi epistolary novel about a white supremacist takeover of the United States, has become immensely popular among white nationalists due in part to the vagueness of its politics. The book constantly expresses animosity towards all the usual neo-Nazi boogeymen but never explains why it fears them. When the protagonist Turner is initiated into the inner circle of The Organisation, he is given a book explaining their creed.  The only description given to the reader is this:

“For the first time I understand the deepest meaning of what we are doing. I understand now why we cannot fail, no matter what we must do to win and no matter how many of us must perish in doing it. Everything that has been and everything that is yet to be depend on us. We are truly the instruments of God in the fulfilment of His Grand Design.”

No ideals or ideology, just a vague statement as to their importance that allows the reader to project onto it whatever turned them on to white nationalism. Ultimately The Hunger Games has far more in common with The Turner Diaries than it does with dystopian stories from the point of view of actual oppressed minorities, like The Matrix.

The Wachowski Sisters’ sci-fi classic is a metaphor for transgender people trying to survive in a society that wants to crush them (as explained here). One of the movie’s most elegant metaphors for societal oppression is the Agents, representing the internalisation of society’s ingrained bigotries and how they can cause seemingly friendly people to become horrifically violent if they realise you’re someone whom society deems undesirable. The heroes’ main threat aren’t the machine overlords, but their fellow humans turning on them.

A common criticism from this film’s detractors is to decry the violence the protagonists visit on agent of the system, like police officers and soldiers. The manner they describe this in is eerily reminiscent of people saying that minorities in America should respect the militarised police forces who brutalise and kill them, because as passive enforcers of the system’s values they are seen as innocent of the ideologies they enforce. I would also like to point out that the Matrix movies may be the most diverse blockbuster series of the past two decades, especially in the sequels where less than half the cast are white.

One last thing I should mention is the deliberate choice to set The Hunger Games in a post-apocalyptic United States. This adds a heavily nationalistic tone to the book, as nationalism is always based around appealing for a return to a romanticised, long gone past. Presenting a dystopian view of the United States encourages the audience to want to see the older, modern version restored. To see the old professed values of liberty and individualism come back. To see Panem made great again.

Based on a series of tweets by Phillip Bastien

The Turner Legacy by J.M. Berger