THERE WAS AN IDEA… A Second Look at THE INCREDIBLE HULK 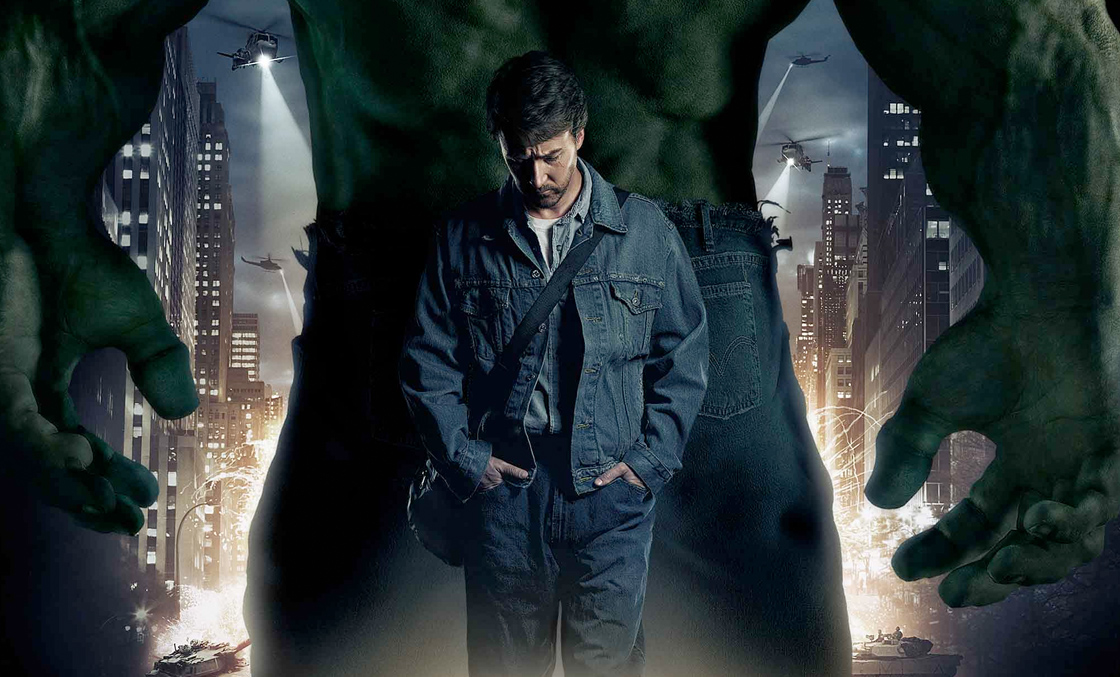 The summer of 2008 was a watershed moment for superhero cinema. In May, Iron Man burst onto the scene. It was colorful, funny, freewheeling, and reminded audiences that superheroes could be smart without being grim, and fun without being campy. Christopher Nolan’s The Dark Knight landed two months later in July and became a bona fide cultural phenomenon. It was the first superhero movie that seemed to truly transcend its pulpy roots–a straight up allegory for the War on Terror that used the cinematic language of Martin Scorsese and Michael Mann, not Richard Donner or Tim Burton. Time has been kind to both of these films. The Dark Knight made well over $1 billion in global box office, won Oscars, and remains the gold standard for superhero cinema. Iron Man spawned two direct sequels as well as the entire Marvel Cinematic Universe, where Robert Downey, Jr.’s Tony Stark still reigns supreme.

But Iron Man and The Dark Knight were not alone in the summer of 2008. Landing in June, right in between those two cultural milestones, was The Incredible Hulk. It wasn’t as fun as Iron Man or as provocative as The Dark Knight. Nor was it as bizarre as Ang Lee’s 2003 take on the character. Rather, The Incredible Hulk tried to stake out a middle ground that balanced brains and brawn, and ended up getting lost in the shuffle for its troubles. It probably failed to turn a profit; its lead was recast; its supporting players all but vanished from Marvel’s shared universe. Ten years on, The Incredible Hulk has become Marvel’s proverbial red-headed stepchild–when it’s thought of at all, it’s typically regarded as an inconsequential mistake better left forgotten.

You don’t even have to wait long before The Incredible Hulk starts surprising you. The Marvel heresies begin right at minute one–there’s an opening title sequence! Rather than re-tell Hulk’s origin story in the course of the film, director Louis Leterrier and (uncredited) writer Edward Norton tasked title sequence genius Kyle Newman (Se7en, Minority Report, Spider-Man 2) with recapping the Banner-Hulk backstory in just a few short minutes. And it works. The credits establish Bruce Banner (Norton), Betty Ross (Liv Tyler), General Ross (William Hurt), the dynamics of their relationships, the gamma ray accident, Hulk’s creation, and Bruce’s escape to South America. The score by Massive Attack’s Craig Armstrong sets the tone. It’s elegant work, altogether, and an effective reminder of what opening titles can do in a time when they’ve all but ceased to exist, replaced with stylish but zero-content end title sequences.

The heresies continue as the story proper kicks off and we find Bruce Banner lying low in a Rio favela. It’s immediately obvious that Marvel shot on location in Rio de Janeiro–sweeping helicopter shots let us soak in the unusual, improvisational architecture of the Rocinha slum, while Leterrier’s ground-level camera lingers on the neighborhood’s colorful, real-life residents. This is no parking lot in Atlanta.

Marvel wouldn’t shoot on location in the third world again until it went to Kathmandu, Nepal for 2016’s Doctor Strange. And even then, there was little effort spent in Strange to capture any real sense of place. It’s location work consisted entirely of a single, brief montage as the good doctor wandered the city. Everything else you see in Strange‘s Kathmandu–the alleyway, Kamar Taj, Everest, etc.–are all sets. The Incredible Hulk has Banner interacting with Brazilian actors playing Brazilian characters, in real Brazilian locations. That same level of authenticity extends to the location work in Canada, where the production shot on a real college campus and in the Rockies.

It’s striking, from today’s vantage point, how much The Incredible Hulk luxuriates in its location work, be they slums, rainforests, or college campuses. There’s a distinct sense of place that almost no other Marvel movies have matched in the last ten years. Few have even tried, if we’re honest.

The cinematography by Peter Menzies, Jr. (Gods of Egypt) deserves praise as well. The Incredible Hulk was probably unremarkable in 2008, but it’s damn near radical by Marvel-2018 standards. There’s an actual depth of field to the images, and scene after scene shows careful work with color and shadow. There’s weather too–when was the last time a Marvel film did something as simple and atmospheric as drenching a scene in heavy rain strictly for emotional effect?

I don’t know it for sure, but the sophistication of the lighting, even in dialogue-heavy scenes, suggests that this may be the only Marvel film that wasn’t shot for coverage and “found” in the editing room. That flat, sitcom-y lighting that’s become so familiar in recent years is virtually nonexistent in The Incredible Hulk and the film is much better for it.

The Incredible Hulk‘s heresies don’t end with the surface stuff either. There are only three real action scenes in the film–the favela foot-chase, Hulk versus the Army, and the final showdown with Abomination. The rest of the movie is focused squarely on Banner and his desperate search for a cure. It’s a slower, quieter film than we’re used to, and it honestly feels like a breath of fresh air now. It’s also refreshing for a Marvel film to be utterly sincere. Latter-day Marvel has gotten into the terrible habit of deflating its big emotional moments with ill-advised jokes, but there’s not even a hint of that ironic detachment in The Incredible Hulk. We’re allowed to watch Banner, naked and shivering, begging in the streets, without someone cracking wise or winking to the camera. We’re allowed to watch him gaze longingly at Betty, pining for lost time and lost love, without something butting in to suck the romance out of it.

And that’s maybe its biggest heresy of all–The Incredible Hulk is the only Marvel film to present an adult attitude toward love and sex. Believe it or not, there’s only one scene of honest-to-goodness romantic foreplay in the entire 18-film Marvel universe. And it’s in The Incredible Hulk. On the run from the law and exhausted from keeping their hands to themselves, Bruce and Betty finally kiss and, in a fit of passion, collapse onto a nearby motel bed. Their hands roam freely, their breathing gets heavy. If not for Bruce’s spiking heart rate and its monstrous consequences, the movie tells you in no uncertain terms that they would have continued. Bruce and Betty have a genuine physical and emotional relationship, and it’s damning how unique that is ten years on. Superhero films, and action movies in general, used to get flack for “shoehorning” love stories in. Marvel deserves the flack it gets for going out of its way to shut them out. Once again, something about The Incredible Hulk that seemed unremarkable at the time feels, ten years later, pretty singular and special.

Of course, no discussion of The Incredible Hulk would be complete without addressing the film’s star. Edward Norton was not Leterrier’s first choice for Bruce Banner. Leterrier favored future-Hulk Mark Ruffalo, who was then an indie darling probably best known for Kenneth Lonergan’s You Can Count on Me or David Fincher’s Zodiac. But Marvel favored Norton. Norton was a household name and had built a reputation as not only a brilliant actor, but a trusted writer and director as well. If you wanted to make a Hulk film that took his psychology and affliction seriously, and which could still draw a four-quadrant audience, Norton was as good a collaborator as you could hope for in 2008. And, sure enough, Norton was a pioneer at Marvel–he was their first strong creative partner, rewriting much of Zak Penn’s script and even sometimes directing himself while Leterrier was filming action sequences with the second unit. Shane Black, James Gunn, and Ryan Coogler walked a path Norton helped clear. His performance as Banner seems to have fallen out of favor post-Avengers, and it’s hard to deny Ruffalo’s rumpled charms, but Norton’s thin frame and hangdog expression helps sell Banner’s desperation and anxiety far more than Ruffalo (or Bana) did. He looks and acts like a Banner who is still reeling from some long, tough, lonely nights. It’s something of a tragedy that we never got to see him go toe-to-toe in The Avengers, where Banner’s material is often darker than is usually remembered. “I put a bullet in my mouth and the other guy spit it out,” for example, would have sounded much different, and much more plausible, coming from Norton.

Watching The Incredible Hulk now is bittersweet. Marvel has undoubtedly seen a tremendous amount of success in the last ten years and it makes sense that The Incredible Hulk, as a stylistic and tonal outlier, got lost in the shuffle. But its virtues are many, and there’s another universe where maybe it didn’t get buried in the summer of 2008, where it found an audience, and where Marvel trusted auteurs earlier and more often, explored the world a little more, and maybe even made room for love and, yes, sex. It’s hard to watch The Incredible Hulk today, with Marvel’s “House Style” having become so ubiquitous, and not hear Captain America’s lament from The Avengers ringing in your ears:

“They say we won. They didn’t say what we lost.”