THERE WAS AN IDEA… THE AVENGERS and Blockbuster Meta-Narrative

"These people might be isolated, unbalanced even... but I believe with the right push, they can be exactly what we need." 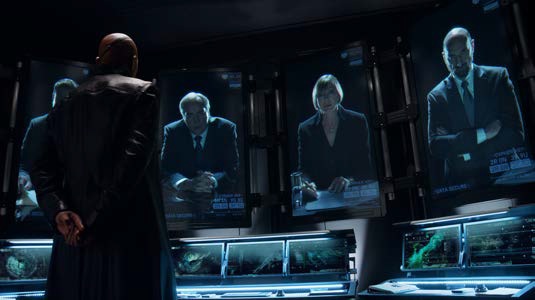 Over the course of its lengthy reign over the box office for the better part of the last decade, the Marvel Cinematic Universe has continually grown outward. The films have continually gotten bigger, weirder, more visually ambitious. We’ve gone from pedestrian outings from pedestrian filmmakers (*cough* The Incredible Hulk *cough*) to a goddamn Shane Black action romp, a modernized Cold War thriller pastiche, two deeply personal space adventures from a cinematic master at sneaking subversion past studio executives, a riotous fantasy comedy that somehow managed to also be about the evils of colonialism and, most recently, a genuinely auteuristic exploration of dueling ideologies and mindsets in the face of oppression. Any of these movies I’ve alluded to above would be an easy choice as your favorite entry in the franchise, as they all bring something unique and special to the table.

However there’s one thing that almost seems to have been forgotten by time: that, quite simply, none of these movies would’ve been possible without the absolute miracle of blockbuster cinema that is The Avengers.

It almost seems quaint now, I suppose. Only six heroes? A fairly contained climactic battle sequence? An admittedly pedestrian visual palette and generally flat and over-lit cinematography? This stuff is old news, man. It was good at the time, but it’s clearly outlived its usefulness, right?

Dead wrong. I’m here to tell you that The Avengers still fucking rules, just as much as it did on the day of release. And so much of that is because of writer/director Joss Whedon’s innate love and understanding of these characters. On the way he prioritizes story function over flash. In how he constructs a screenplay that kinda gets off to a sluggish start and picks up as it goes along, painstakingly doing the work it needs to to get the audience to love, enjoy and invest in these characters, before bringing the characters together in a way that feels both truly thrilling and dramatically earned.

But I also think there’s another level to it, and that level lies on the fourth wall. You see, kids, The Avengers has something of a poorly kept dirty secret: it’s secretly a meta-meditation on both the film itself and what it means for that film to exist. There’s actually another, more recent blockbuster that takes a similar tack, but that’s for another article (Hint hint: Star Wars).

When Joss took the job, he clearly realized that he had an uphill battle ahead of him. He not only had to bring six characters together (including one that he was essentially re-rebooting from the ground up, and two that had only briefly appeared in the films of the others), but he also had to make it feel like a payoff of the five previous films’ audience investment. The crowd had bought in, and now they had to be delivered what they were promised. At times, you could feel the other films hedging their bets, not wanting to overshadow the main event (Note how both The Incredible Hulk and Iron Man 2 have relatively light, self-contained finales in the general New York City area, but never in the heart of Manhattan itself). Now, it all had to be brought home.

So how did he do it? Well, I think he decided to sell the movie to the public the same way he sold it to the upper brass at Marvel Studios. He created a thematic throughline that is secretly designed to get the audience to want to, and then to actively root for the movie to work.

And at the heart of this is the movie’s secret central protagonist: the Director of S.H.I.E.L.D., Nick Fury.

Nick Fury, in this blockbuster meta-narrative Joss constructed, is essentially an amalgam of Joss himself and the Marvel Cinematic Universe’s producer and primary architect, Kevin Feige. And in case you don’t see this, look at how the movie starts.

We open, after a brief prologue where the Other (a Mouth of Sauron lookalike working for our secret bad-guy-in-chief) explains how Loki is about to have us get got via an alien invasion, on Fury watching as Loki, our deliciously evil villain played with absolute relish by Tom Hiddleston, makes off with the Tesseract (a McGuffin source of unlimited power the previous films had built up as the key to the future). Phil Coulson, Fury’s loyal agent (and the meta-stand in for the average comic book fan, which I’ll get to in a minute), asks him the question that kicks it all off.

And from there, we hear Alan Silvestri’s splendid theme for the first time as the camera pans around our main character before cutting to the title. It’s a glorious moment, one that clearly sells us on the enormity of what’s about to happen. That we’re witnessing superhero movie history in the making. But it also asks the question Whedon and Feige must have been asking at the beginning: We have such a momentous task ahead of us. How in the hell can we make this work? Six characters together in a superhero crossover movie? That’ll never work. There’s a reason no one’s ever tried before. But work it must. Heroes are needed and there’s a world to be saved.

We get some introductions and re-introductions to main characters, before cutting to the next major scene of import: Fury meeting with a shadowy group of higher authority known as the World Security Council. Watch it.

In case you aren’t paying attention, the movie literally has the shadowy upstairs brass (AKA the studio executives) argue that “the Avengers Initiative was shut down” and that you can’t place the fate of the world (or the box office?) in the hands of “a handful of freaks.” Their view is cynical. Again, the Avengers just cannot work. You can’t get all these characters together and expect it to fly. It must come apart. Right? Six characters is too many to juggle at one time!

Geez, all this cynicism is utterly exhausting. Maybe we need a different perspective. And a few scenes later, we get one, in the form of the aforementioned fan stand-in, Agent Phil Coulson, meeting his idol, Captain America, for the first time.

It’s adorable, as Phil is clearly thrilled to meet his idol. But it’s more than that. He tells him that he’s helped in redesigning him a new suit, one that’s meant to fully embody the heroics associated with his iconic image. Cap questions, “The uniform? Aren’t the stars and stripes a little… old-fashioned?” Coulson replies, without missing a beat, “With everything that’s happening, the things that are about to come to light, people might just need a little old-fashioned.”

Joss presents the cynical argument for how this will go, then counteracts it by having a beloved character point out why that cynicism is nonsense. The day of Bryan Singer’s X-Men, of turning your nose up at the idea of a colorful costume or yellow spandex, is over. The age of the superhero has come, and in that age, people might just need some old-fashioned ideals to ground them.

The second act of The Avengers is where the movie really gets cooking. Characters bounce off one another, insight is brought to ones previously kept at a distance (Natasha and Banner own this movie), there’s a plentiful helping of heart and humor, Loki finally gets to strut his stuff as a full-on villain (once again presenting the anti-movie perspective: “You call on such lost creatures to defend you”). It’s all an absolute joy to watch, but it must end. Cynicism must come crashing in again. And so, the Avengers fail. Divided, they all barely make it out of the surprise attack/unleashing of the Hulk alive. Banner is stranded, Earthbound and buck-ass nude. Thor practically loses his ability to lift his hammer because of his arrogance. Natasha manages to save her friend Clint, but they both take a hell of a physical and psychological beating in the process. Tony and Steve learn to work together, but only manage to accomplish the bare minimum.

And Phil Coulson is dead (And as we all know, he definitely stayed dead. Forever.).

Before one final act of defiance (“So that’s what it does”), Phil tells Loki he’s going to lose. When Loki demands an answer as to why, he’s told he lacks conviction. When Fury, our secret central character, arrives, he tries to keep him going. Coulson tells him, with his last breath, that “It’s okay, boss. This was never gonna work if they didn’t had something to…”

And that leads us to one of the two key scenes of the movie: Fury’s speech to Tony and Steve.

“There was an idea, Stark knows this, called the Avengers Initiative. The idea was to bring together a group of remarkable people, see if they could become something more. See if they could work together when we needed them to to fight the battles that we never could.”

We feel the weight of Coulson’s death, and so do our heroes. And as he predicted (and as Joss/Fury needed), it galvanizes them to come together. After an entire movie of personalities clashing, of infighting, of uncertain ground, the Avengers rally as Loki enacts his ultimate master plan.

And it all builds up to the absolute key moment of the movie, the real reason it exists, and the basis of what basically the entire movie up to that point was leading to: The Shot. You know the one.

But above all, we’ve come to believe in them. Tony Stark learning the right path in a cave in the desert. Thor choosing humility and the right path over personal glory in battle. Steve Rogers leaping on a grenade and always putting others above himself, even after becoming the world’s first superhero. Natasha Romanoff wanting to wipe the red out of her blood-stained ledger. The secret of Bruce Banner, that he’s always angry. Clint Barton… well, that’s for the next movie.

And Nick Fury, the Director, he believed in them too. He believed The Avengers could work.

…we come our ending, and one final meeting with the World Security Council.

We see the impact the Avengers’ heroics are having on the world. We see the hope and optimism they inspire. And it can easily be assumed this hope and optimism bolstered the film’s enormous box office, one that has yet to be topped in worldwide grosses (though Black Panther or the upcoming Infinity War might yet beat it).

The Council questions Fury on his process, the same way a room full of executives might question a writer or producer on their plan.

“I’m not sure you know what you’ve started, letting the Avengers loose on this world. They’re dangerous.”

The head of the Council asks him one final question.

“Was that the whole point of all this? A statement.”

And Fury’s answer teases what comes next.

“They’ll come back… because we’ll need them to.”