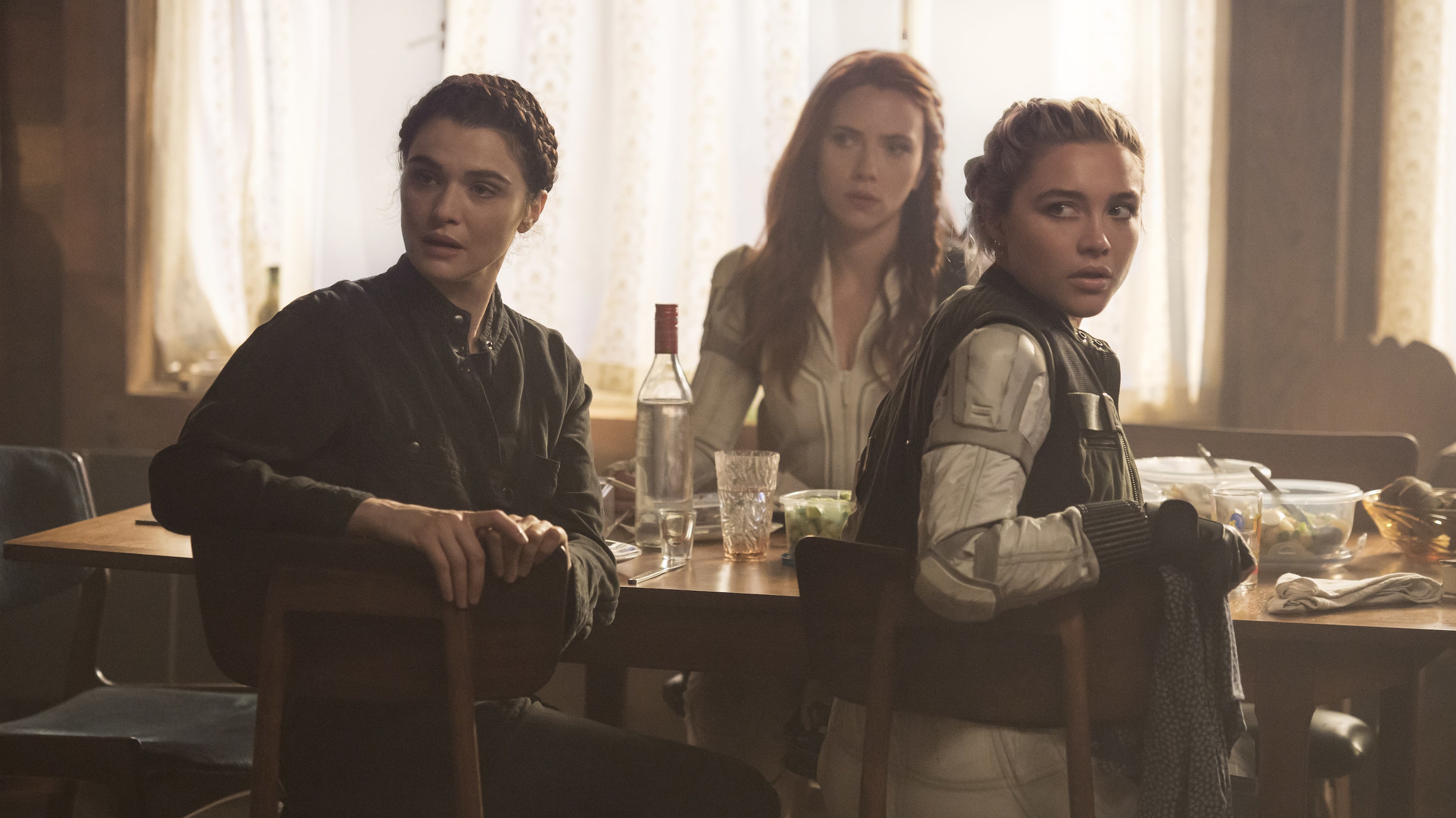 Marvel’s first movie of 2021, Black Widow, arrives to “open” a summer blockbuster season still amid a pandemic. It’s the first Marvel movie to open in theaters while also being available for Disney+ subscribers for an additional fee; given its success so far, it might not be the last. It’s also a very different entry in the MCU because it’s neither a true origin story nor a sequel and is the first movie to take place in the middle of the MCU timeline with a well-established character whose future has already been written. As a result, it has to do the task of re-establishing the character inside the MCU timeline while giving audiences something new. The result is an enjoyable movie with mostly successful results.

Black Widow starts in Ohio, where a young Natasha and her sister, Yelena, are growing up with Melina and Alexei, two Russian spies sent to embed in the United States and steal scientific information that eventually kickstarts the Red Room’s mind control program that places Black Widows under the complete control of General Dreykov, the mastermind behind the Red Room. Having secured the data and about to be discovered, the family makes their big escape to Russia and are separated, the children sent to train in the Red Room and Melina and Alexei into parts unknown.

The movie takes place 21 years later, mere days after the events of Captain America: Civil War. Natasha’s time laying low to escape Secretary Ross’s security forces is cut short when Yelena (played by Florence Pugh), newly freed from Dreykov’s mind control when another Widow exposes her to a mysterious gas, steals the rest of the gas and sends it to Natasha’s Budapest safehouse, where the vials are mistakenly taken to Natasha in Norway, setting up the sisters for an unhappy reunion.

If you recall, Budapest was first mentioned in Avengers when she and Clint are fighting in New York. Their witty banter and the lines, “ just like Budapest all over again / you and I remember Budapest very differently!” set a whole fandom aflame in 2012, and this movie brings Natasha “home” in two ways, first to Budapest where she first met Clint, then to Russia. As part of her defection, she and Clint kill Dreykov. Unfortunately, his daughter Antonia was a key part of ensuring Dreykov was in the building before Natasha leveled it with explosives, and a child’s death has been on her conscience ever since.

As might be predictable by now, Dreykov isn’t actually dead and the Red Room still persists, churning out dozens of deadly Widows and dispatching them around the world. Dreykov is a boogeyman, a near-mythological figure who is so secretive that not even Yelena knows where the Red Room is. To take him down, Natasha and Yelena have to find some people who might know where the Red Room is – their fake parents.

What really works about Black Widow is the underlying theme of family, autonomy, and sacrifice. Natasha and Yelena are not just trying to stop Dreykov, they’re trying to free other Widows from his control. Dreykov is not only indoctrinating children for assassinations – he is targeting girls, taking them from their homes and treating them both as trash and as a renewable resource. His misogyny creates an additional layer of horror to their terrible victimization and informs the Red Room’s choices, like the forced hysterectomies first referenced in Avengers: Age of Ultron. There’s a scene where Alexei asks if it’s Yelena’s “time of the month” and Yelena proceeds to both insult him and glibly describe to a cringing Alexei how the Red Room’s surgeons remove reproductive organs. As it’s been reported, screenwriter Eric Pearson included the joke because he thought Alexei would be retrograde in his gender politics. Shortland, Johanssen, and Pugh crafted a clever rebuttal that led to one of the funniest moments in the movie while also serving to show how Yelena is able to talk about trauma and throw it in Alexei’s face since he’s partially responsible for what happened to her.

Many of Shortland’s directing choices appear to purposefully call back to both Captain America: The Winter Soldier and Avengers, which make a lot of sense in terms of how the former is the clearest display of how the Red Room and Winter Soldier training overlaps and the latter helps inform an “origin” of sorts for Natasha getting together with her Avengers family.

I noticed a focus on hand-holding in this movie, an emphasis on physical and familial touch as a form of connection that is denied to people without autonomy. It would be wrong to frame this as a feminization, like a movie whose main characters are women would have more tenderness, but I think it’s important to see the way the women in the movie are hurt by misogyny, and denied the ability to feel closeness, with the choice to begin healing from tragedy and pain by using touch as a source of comfort. To me, details like this are the biggest strength to Shortland’s direction. Yes, there are explosions and lots of punching and shooting but these moments help anchor the characters in something less fantastical.

The first two acts are the strongest, taking Natasha and Yelena across Europe back into Russia and setting up an uncomfortable family reunion with Alexei and Melina. The sibling bickering between Natasha and Yelena is funny, and Pugh is such a great addition to the MCU. She plays Yelena as both world-weary and giddy to experience the world on her own terms and gets some of the movie’s best moments and the movie’s two best running jokes. Scarlett Johanssen, in a decade of Marvel movies, doesn’t have to dig too deep to find Natasha’s heart but still manages to add more to her beyond what we’ve already seen.

Pearson’s script, period joke aside, is pretty strong overall. The spine of the movie is Natasha and Yelena’s bond with each other, despite their estrangement, and Johanssen and Pugh have an easy rapport with a lot of emotional underpinning and body language to help sell their relationship. There’s also plenty of family bickering that comes off naturally and helps to bring emotional understanding at the same time. David Harbour is hilarious as Alexei, playing a washed up Soviet-era supersoldier called the Red Guardian whose heyday was the Cold War. There’s one scene where he, who turns out to be an absolutely cringey and awkward father, gushes his pride and admiration for his children becoming incredibly successful killers and it’s genuinely funny to see it played as physical comedy as the two trained assassins he’s proud of just stand there looking incredulous. Rachel Weisz is also good as Melina. Although she is saddled with a lot of exposition integral to setting up the third act, she brings a lot of heart and sad regret in her eyes.

The movie has a rougher landing when it comes to giving the backstory to Natasha’s defection. While it aligns with Natasha’s character to kill Dreykov and sacrifice a child as collateral damage, I’m not sure Clint would have, and it makes me curious how they were going to try to square his characterization in a movie that he’s not even in (Jeremy Renner has a few lines via a recording but doesn’t appear). Taskmaster is also a missed opportunity. There was a great deal of speculation about who was underneath the helmet, and the big reveal is a letdown if only because the movie doesn’t have enough time to delve deeper into the implications of it. Black Widow isn’t even a particularly long movie, but it just doesn’t have enough time in the third act to breathe because of everything it has to do. Dreykov is not particularly interesting as a villain, but Natasha understands how to pick apart the weaknesses of mundanely misogynistic and insecure men, and so their inevitable showdown is good for the tension it brings as you wait for Natasha’s next move. Oddly, the most egregious transgression isn’t in the movie. The movie should have been a proper send-off for Natasha and it seemed like Marvel agreed… right until the post-credits scene. I won’t spoil it, but I think it was the worst way to end the movie and it misreads the tone and undercuts an earnest emotional moment for the audience.

Regardless, most of the movie works well, and if Marvel elects to continue by telling Yelena’s story (she is a Black Widow, after all) she might be a breath of fresh air for Marvel. We need more women in the MCU, and Marvel has already confirmed that Yelena will appear on Hawkeye. If this is the actual end of Natasha’s story, it is a mostly fitting one. It doesn’t dwell on the past (this isn’t the Russian way) as much as it tells the less cosmic, more human stories in between and uses the quieter moments to help some larger than life figures find grounding and peace in a terrible world.

Review: WRATH OF MAN Previous
Review: ROADRUNNER: A FILM ABOUT ANTHONY BOURDAIN Next