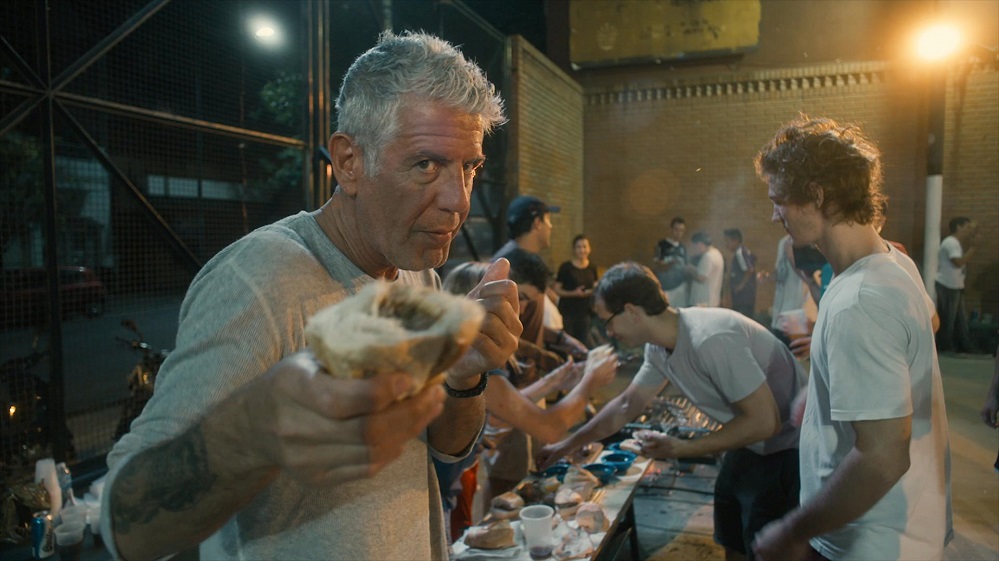 Where does one even begin with Roadrunner: A Film About Anthony Bourdain. It’s safe to assume that, if you’re reading this review, that you know the broad strokes of his career — a chef who wrote a best selling tell-all about the industry that went on to become an international superstar, hosting travel and cooking shows for multiple decades. You also probably know that in 2018 he committed suicide in his hotel room during the production of his series Parts Unknown. Morgan Neville’s documentary, his first since his spectacular one-two punch of Won’t You Be My Neighbor and They’ll Love Me When I’m Dead, tries to shine a light on who Bourdain was as a man behind the scenes, without succumbing to being the type of incurious biography that paints the man as perfect.

The beginning and middle of Roadrunner are an intriguing look at Bourdain’s career and the unexpected pressures that came with his sudden fame and wealth. He’s shown as a romantic, as someone who really was invested in his role as an educator of world cuisine and culture. A vignette of his episode recorded in Lebanon that was interrupted by a literal war exemplifies the best of what the film does. It shows Bourdain as a genuine person who wants to do what little he can as a TV host to make the world a better place, unafraid of how damning of western culture it really is. “There’s a war going on and I’m sitting by the pool getting a tan” is the biggest indictment of America’s place in the world, and Bourdain highlights this with a wry sense of humor in addition to a concern for his fellow man, refusing to hide the cruel reality of warfare’s brutality despite requests from producers and his network.

Unfortunately, there’s an element of salaciousness to the whole endeavor that can’t help but feel pervasive. Won’t You Be My Neighbor was a glowing, borderline-hagiographical analysis of Fred Rogers, who had passed away nearly 15 years prior to the film’s release. They’ll Love Me When I’m Dead similarly reflected on events that happened long ago, and no one outside of the oldest of old-timers was going to be incensed by any slanderous depiction of Orson Welles. But the loss of Bourdain is still raw. It’s barely been three years since his death and, frankly, it has felt much shorter. The details of his passing similarly make the topic feel uncomfortable at best and emotionally triggering in a crass way at worst.

But then we get into the Argento of it all. The film dedicates its final section to discuss and depict Bourdain’s relationship with actress and director Asia Argento, who was a pivotal figure in the late ’10s #MeToo movement as one of the most prominent accusers of Harvey Weinstein and other sex pests in the film industry. Bourdain took up the #MeToo mantle as well, using his clout to bring attention to the cause and becoming a crusader for the movement. The film depicts this as an outlet for Bourdain’s unresolved depression and addiction rather than a genuine campaign against sexual harassment and assault by men in power. It’s a decision that comes off less as genuine insight and more like gross speculation by friends and family.

Argento herself is characterized as the cause of Bourdain’s fall from grace, directly drawing a line between her and not just Bourdain’s death, but also friction with his friends and colleagues towards the end. Weirdest of all, the film completely ignores the accusations against Argento and the subsequent hush money paid out by Bourdain and Argento to an underage teen who had a sexual relationship with Asia. The film tries to have its cake and eat it too, portraying Argento as a villain while simultaneously stopping in its tracks to say “but she didn’t do anything, it was all on Anthony.” Argento is admittedly a complicated figure — see literally everything I’ve written in the past two paragraphs — but the way the film turns her into Bourdain’s Yoko Ono feels like too simple of a “downfall arc” than a person as complex as Bourdain deserved and truly underwent.1

About three quarters of the way through Roadrunner I found myself ensconced in Neville’s rhythm as a filmmaker. The talking heads, the archival footage, Bourdain serving as his own narrator; everything I expected and longed for out of A Film About Anthony Bourdain. There was still apprehension about how the end of his story would be told, and Roadrunner isn’t sensitive enough to handle the subject matter, nor does it deeply delve into the tangled knots of his final days, relying on worn out tropes built on conjecture and assumption. It’s a fatal flaw for an otherwise well made documentary.