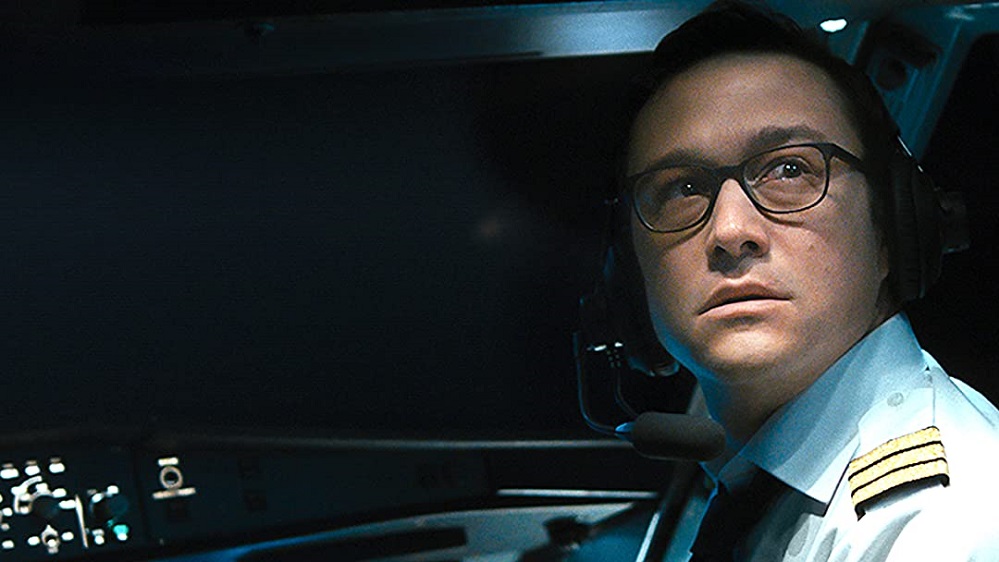 In recent years, it has become increasingly popular for independent films to utilize single-locations for maximum effect. It’s a clever trend that stretches a budget and often works in a strong filmmaker’s favor as a method of ratcheting up tension. Gustav Möller’s The Guilty from all the way back in 2018 is my favorite example of this, utilizing what is essentially an open-office setting for one of the most haunting single sets in recent memory. Patrick Vollrath’s feature-length debut, 7500, is another solid entry into this single-set thriller subgenre, even if it struggles at times to maintain the energy needed to fill out its runtime.

The film’s setup plays on one of the primary fears of a post-9/11 world: acts of terrorism during air-travel.1 We open on a series of CCTV shots of a young man — who we later learn is a 19 year old named Vedat (Omid Memar) — going through airport security. The POV then switches to that of the flight’s first officer, Tobias (Joseph Gordon-Levitt) as he prepares for his flight. Shortly after takeoff, Tobias and the flight’s captain are attacked by Vedat and three other men when an attendant attempts to deliver their in-flight meal. Tobias is able to force out all but one of the attackers and knock out the other who had fatally stabbed the plane’s captain. The film then focuses on Tobias and Vedat, who speak to each other on opposite sides of the cockpit door via telephone as the terrorists attempt to take control of the flight and Tobias tries to control the situation.

Outside of the previously mentioned airport CCTV shots and another closed circuit monitor that displays the front of the cabin, the entirety of the film takes place in the plane’s cockpit. Much like other genre exercises such as Locke, Buried, and the aforementioned The Guilty, the single setting plays a huge role in what makes the film work. So much of the film feels claustrophobic and it is perfectly accented by the sounds of pounding on the cockpit door, the darkness of the cockpit, the glow of the plane’s instruments, and the constant feeling of motion outside the window. Despite (obviously) not taking place during an actual flight, Vollrath makes it feel like the plane is in motion throughout.

The strongest part of 7500 is when Vedat and Tobias begin connecting with each other on a personal level, but these scenes suffer by taking up too much of the runtime. These moments of almost relief and placidity would work much better had they been sprinkled in, but nearly the entirety of the final third of the film winds up becoming a tension-less exercise in meandering character exposition. We get a few scenes where Tobias and Vedat discuss their lives and who they are outside of current events that are wonderful, but what could have been a nice respite just becomes tedious to get through when it goes on for an extended period of time. It’s one of those cases where Vollrath knew he had a good thing, but needed to reel it in.

Fortunately the film’s midsection is so well directed, edited and written that it makes up for that late sluggishness. One could complain about the film’s over-reliance on genre tropes that are littered throughout, but Vollrath does a great job of powering through those cliches by sheer force of filmmaking and with solid character work. It’s a debut that bolsters Vollrath’s claim to being a young filmmaker to keep an eye on — his previous film, the 2015 short Everything Will Be Okay, was nominated for Best Live Action Short at the 88th Academy Awards. 7500 is far from a perfect movie. It has a lot of lulls and low-points that are impossible to ignore. That said, the highs it hits are so well conceived and executed that it’s worth giving a shot.