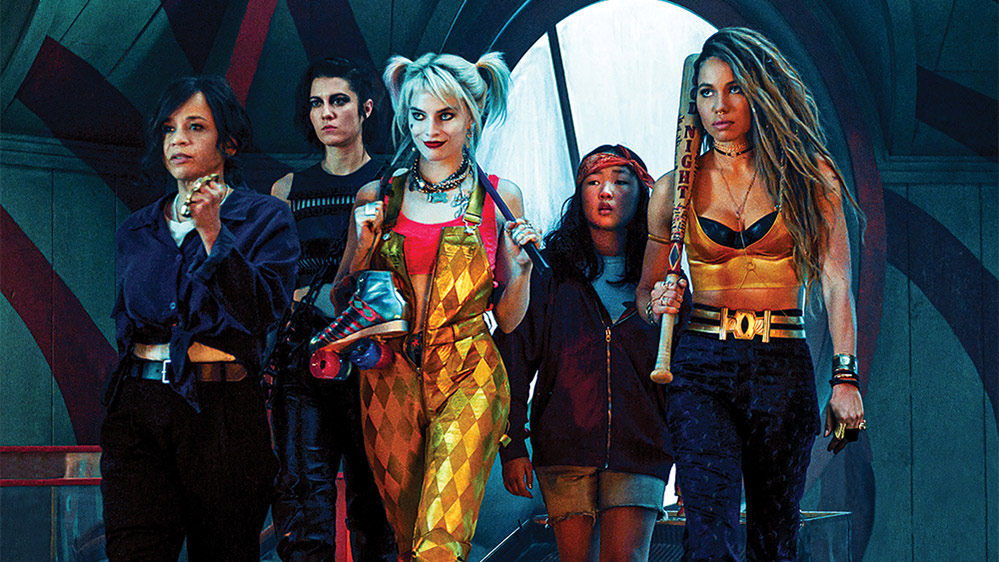 What’s the antidote to the gritty and gloomy DC movies of the last few years? Colors. Lots and lots of colors. Starting with the underwater neon of 2018’s Aquaman, DC has started to finally let its movies come alive with a color palate other than black, gray, and blue. The most recent entry to reject gloom is Birds of Prey (and the Fantabulous Emancipation of One Harley Quinn), spinning off Harley Quinn (Suicide Squad) into her own story of mayhem. It’s mostly successful, bringing together a charming cast of women (and a few men) and a relatively simple plot that doesn’t wear out its welcome given the film’s relatively short runtime.

Birds of Prey has a difficult task of setting up a new series while technically continuing threads of a different one. Introduced in Suicide Squad, Margot Robbie’s Harley Quinn was both girlfriend and henchwoman to Jared Leto’s Joker. Striking out on her own in Birds of Prey after a bad breakup, Harley realizes that without the protection of the Joker, she’s a target for every scumbag in Gotham. The one who is most successful at getting to her is Roman Sionis (Ewan McGregor), a pampered mobster who has aspirations to control Gotham beyond just his own territory in the west end.

By far, the most interesting aspect of Birds of Prey is how it eschews a typical team dynamic in favor of separate stories that eventually weave together for a third act showdown. Some may be disappointed by this, but I found it a generous way of giving each character their own story even though Harley is the one driving the entire thing. For example, even though we don’t know much about Cassandra Cain (Ella Jay Basco) other than she’s a talented teenage thief and has lots of trouble at home with possibly abusive parents, the movie wisely puts her apartment in the same building as Dinah Lance / Black Canary (Jurnee Smollett-Bell), a singer in Roman’s club. This gives both women a reason to interact entirely outside of the main plot. The same is done for Renee Montoya, a detective who is investigating Roman and has Harley in her crosshairs. Building the underworld of Gotham this way gives each character room to show personality. The most effective way this is employed is, oddly, in the storyline that barely intersects with any others. Mary Elizabeth Winstead plays Helena Bertinelli/Huntress, and she’s easily got some of the best moments in the movie. She is also used expertly as a commentary on the recent slate of gritty DC movies. I won’t spoil much but it’s just so fun to watch the movie play around with Huntress, all with the audience in on the joke.

Winstead, Perez, and Smolett-Bell each stand out in their own ways, not just because of their styles but in how they approach the world. Huntress just wants revenge and every day of her life has led to this moment. Montoya is a good detective whose work is ignored or stolen for someone else’s glory. She persists, not because she is a pushover but because she wants to put away bad guys. Dinah just wants to keep her head down and survive. Singing at a club is hardly the stuff of dreams but it’s enough. Cassandra is merely a kid who got in over her head and is constantly adapting to new situations with a reasonable amount of fear and fascination. Harley is just trying to figure out who she is without a man defining her entire life.

The villains in this movie mostly stand out for how… normal they are. They’re not superpowered or anything, they’re entitled monsters who hurt women and the world has plenty of those already. Ewan McGregor is fantastic as Roman, a preening narcissist because he’s insecure about his position as a crime boss and cruel because he’s eager to consolidate his criminal empire. At his right hand is Victor Zsasz (Chris Messina), a sadistic killer. Their relationship is a bizarre display of co-dependence and obsession, with Victor constantly reassuring his boss about his plans and doing his bidding and Roman relying on Victor for practically everything. Victor and Roman represent the kind of control and gravitational pull that Harley, Renee, Huntress, and Black Canary can’t escape because they have the power and money. The movie is abundantly clear by the third act that fantabulous emancipation is necessary for all of the women, not just Harley.

Margot Robbie deserves incredible amounts of credit for bringing together such an interesting cast and shepherding the story to the screen the way she has. Though she didn’t write the movie (that’s Christina Hodson) or direct it (that’s Cathy Yan), she certainly pushed and pulled at the studio for Harley to get her own series. In Hodson’s hands, Harley isn’t just a breakout character whose bright hair and strong desire to smash things makes her a nice contrast to the elegance of Wonder Woman and the macho tendencies of well, the Suicide Squad. She is firmly planted in this movie as both a means to independence and self-reliance and recovery from abuse. The movie doesn’t depict it explicitly but instead, Yan gives us a visual language to understand what has happened to her, allowing her to drift into a Marilyn Monroe fantasy as she’s being hurt by Roman and his goons. Without such attention to detail by all of the women involved, from Robbie to Hodson to Yan, the movie simply wouldn’t have worked. There are small moments in this movie that both work as jokes and as does to female camaraderie, like when Harley offers Dinah a hair tie mid-fight.

Yan is a new director whose first movie, Dead Pigs, still hasn’t hit screens despite winning a Special Jury Award at Sundance in 2018. Her work on Birds of Prey, along with Matthew Libatique’s fantastic cinematography, show that she has a talent for conveying emotions and spirit even in fights where there might typically be less of both. Some of the best moments in the movie emerge because the script and the directing work together so well.

I only have minor complaints about this movie, namely that Gotham doesn’t really play a part in it at all and it might as well have been New York City, and that even though its short runtime is good I think it needed a few more minutes to let the audience linger on the details on screen. Sometimes the scene just moves on at a steady pace and there isn’t as much opportunity to just notice the background details or the characters.

Overall, Birds of Prey is really fun to watch. Every character is great, there are so many running jokes to appreciate, the callbacks to Suicide Squad are minor. Comic book movies led by women and made by women are still far and few between. It’s interesting to see how women are shaping even these early entries and moving slightly away from the safer stories to take risks with characters who aren’t always likable or who aren’t interested in the ideals of doing right all the time. It shows that women are out there, waiting to tell stories.