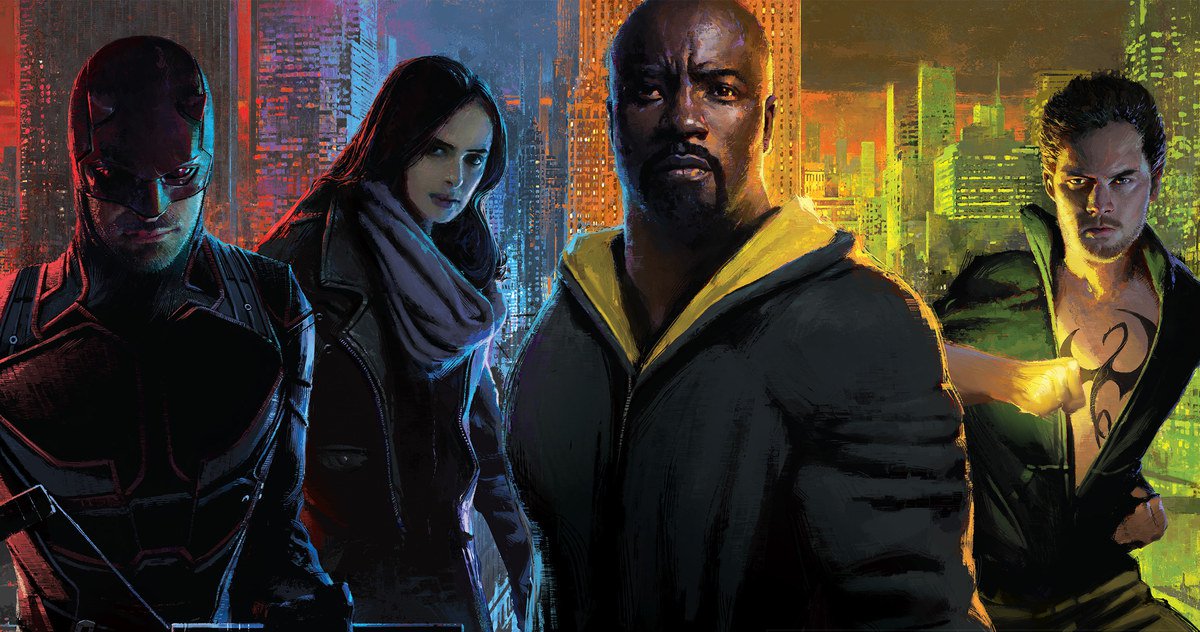 In today’s busy comic book adaptation landscape, the Marvel Netflix shows have stood out thanks to their intense noir atmosphere, self-contained scale and bold dives into uneasy social issues. Considering that The Defenders is the ultimate payoff to the enterprise, it was always destined to be the parameter that would measure its general success. I’m glad to report that the crossover event is indeed, worth the wait.

We find the four protagonists, Daredevil/Matt Murdock (Charlie Cox), Jessica Jones (Krysten Ritter), Luke Cage (Mike Colter) and Iron Fist/Danny Rand (Finn Jones) in similar bittersweet stages. They managed to survive the threats in their individual journeys by paying an expensive emotional price that’s still affecting them. They’re not entirely sure how to proceed with their lives, but they work to reach a balance between being a positive influence in their communities and reaching internal tranquility. After investigating a series of related suspicious events throughout New York City, they find themselves fighting together against a common enemy: the shadowy and ancient assassin organization The Hand, from Daredevil Season 2 and Iron Fist Season 1.

The fact that these heroes have very different backgrounds, experiences and philosophies molding their approaches to saving people makes them hesitant conspirators. They know the burden it implies, and are afraid of reviving the suffering they went through with past allies and the collateral damage it caused. Not to mention they don’t exactly have humble egos.

At the same time, they all want to protect New York and won’t let anything get in the way of that goal. The dynamics that result from these complicated circumstances make their alliance feel closer to a therapy group than a special forces unit. Their interactions, though not pleasant all the time, helps them by distributing the weight of responsibility in equal measure with capable and (mostly) morally reliable partners.

Interestingly enough, The Hand goes through trust issues of their own. Its top five commanders (referred as “The Fingers”) know that joining forces is fundamental to their victory, while also being aware that they’re all snakes in a pit staring at each other, ready to bite if they have to. Especially when it comes to their emotionally troubled leader Alexandra (Sigourney Weaver rocking a series of pretty amazing outfits that illustrate her authority status), who is trying to fill a vacuum left by a life of loneliness.

The charismatic leads have great chemistry, so it’s very fun to see their diverse personalities clash and mesh with each other. Regardless of the level of tension that’s being dealt with, they inject undertones of affection that informs the respect that grows between them. They’re accompanied by Stick (Scott Glenn), who simultaneously acts as a voice of reason and an agent of chaos. Glenn’s unsettling but mesmerizing performance keeps you at the edge of your seat, always making you wonder how you should feel about Daredevil’s cynical mentor. Sigourney Weaver as Alexandra is effortlessly imposing and provides a poignant matriarchal elegance to make clear that her character is having a hard time holding herself together, but facing her problems with dignity and ambition.

Elodie Yung is back with a vengeance as Elektra Natchios, adding even more thematic layers to the canvas. She’s the most symbolic character in the show, since she works as a reflection of the protagonists’ darkest impulses and traumas, as well as a vision of what would happen if they went completely off the rails. She has Daredevil’s addiction to violence and adrenaline, Luke Cage’s natural leadership, the position of savior like Iron Fist, and has been manipulated by a person that sees her as a means to an end like Jessica Jones. It’s what makes her such a terrifying adversary, physically and mentally. Yung does an excellent job going back and forth between psycho-killer mode and the quiet meditative moments that Elektra experiences on her path to define who she is. She’s like a more rational and calculating version of Winter Soldier.

From technical and narrative standpoints, The Defenders makes intelligent choices that help the show feel tight and dynamic. Having just eight episodes, instead of the traditional thirteen, did wonders for the pacing, which was arguably the biggest issue in the previous Marvel Netflix seasons. As a result, there’s a stronger sense of urgency, even in the scenes meant to give room to breathe. It’s so efficiently structured that it can afford to dedicate several moments to minor characters without ever dragging. Quite the opposite in fact, said moments help to illuminate the importance heroes have in New York’s society, and not just the ones with special abilities (most notably nurse extraordinaire Claire Temple, played by Rosario Dawson). The fight scenes are superbly staged and are at their best when the protagonists do some sort of combo move together, highlighting their transformation into a single force to be reckoned with. They’re also enhanced by an astute use of long shots that takes advantage of the specific geography and personality in the locations. The transitions between sequences are delightfully comic-book-y and reminiscent of the ones in the Batman show from 1966. It’s a small detail that adds extra panache to an already visually captivating environment. John Paesano, the composer from the first two Daredevil seasons, brings the goods again in the soundtrack, accurately conveying the gloomy situation of the story and the characters’ nobility and flaws.

Watching these lovable misfits sharing the screen is cathartic because it’s the culmination of an ambitious project with the excitement, impressive craftsmanship and high stakes you expect from a superhero adventure. However, it’s the sympathetic and thought-provoking examination of depression, the burden of the past and the need to belong what makes The Defenders a towering and emotionally resonant achievement.

I Don't Know But I Been Told / Steven Soderbergh Has... Previous
The Bus Stops Here: Adaptation vs Adaptitis Next