As first episodes go, this one is almost a killer 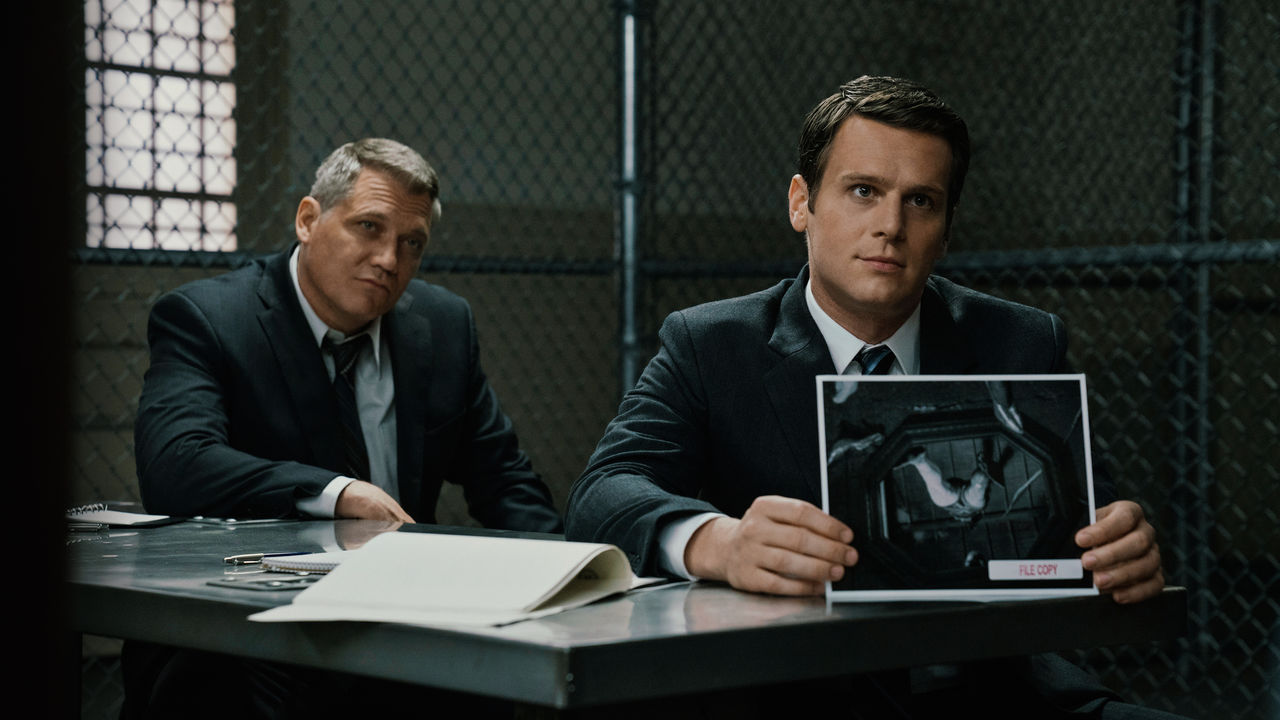 In the opening scenes to Mindhunter we see Special Agent Holden Ford (Jonathan Groff) ride up to a hostage negotiation in a wet, dingy part of town. He’s all authority as he walks up to the police, wearing an FBI jacket we’ve seen a thousand times on television. Holden, as much as he knows about hostage negotiation, is young and inexperienced. His voice reaches a higher octave as he yells at the man holding innocent people hostage.

“Codyyyyyy!” he yells, drawing out the last syllable. It’s a tone that wouldn’t seem out of place in a suburban cul-de-sac, where a beleaguered father yells down the street at his child to come home for dinner. Holden is yelling not at a child, but at a broken man whose life has been upended. When the dust settles, Holden is unnerved by his experience and what he didn’t know and it sets the tone for the rest of the episode.

Mindhunter is about the start of the FBI’s criminal profiling units in the 1970s, a time when the country seemed to be slipping from its foundations. The late 1960s and 1970s read as a who’s who of murder and mayhem. It was just after Vietnam (1975), after Charles Manson and his Family (1969), and after David Berkowitz marauded all over New York (1977). Back then, the FBI had no formal basis for understanding serial killers, their motivations, or how to prevent others like them. They didn’t even know what types were out there or how to find them.

Enter Holden and Bill Tench (Holt McCallany), an agent who works with the Behavioral Science Unit. Bill is teaching police departments around the country everything he knows about applying psychology to catching criminals but still yearns for some certainty behind what he teaches. Holden attends a psychology class at the University of Virginia with lukewarm support from his supervisor (who wants him to use it as a recruiting tool), but he wants something more tangible. Both agents believe that applying psychology to criminology has immense potential, but are stuck in a outdated system that thinks murderers are born crazy or evil. Bill wants Holden’s teaching experience and help with police departments and Holden wants the boots-on-the-ground experience Bill is offering. Theirs is a match made out of shared curiosity. Two souls looking into the darkness together.

There are lots of things about this episode of Mindhunter that work well. Groff’s wide-eyed and earnest charm is necessary for a character like Holden. As an audience surrogate, Groff’s frustrations are the audience’s frustrations, too. What doesn’t quite work (as far as this episode) is believing that Holden is a real person. The dialogue is rigid and too precise at times, like it belongs on stage rather than on a screen. On one hand, you’ll have no problem hearing and understanding what is being said. On the other, it sounds unnatural.

Bill is subversion of our expectations. He’s an older man with a gruff voice who resembles what we’d expect of a pulp dime store detective story, but he’s cerebral and he treats his work with care. He is the one who really kicks off the story. He is the one who invites Holden to work with him. McCallany plays him with an understated hesitation and desperation, like a man who knows there’s not much time left to convince people he’s right about what he’s teaching.

The third main character rounding out this episode is Debbie, a master’s student in psychology that Holden meets at a bar. He tries to flirt, and boy is it awkward, both because Holden is inept but also because the dialogue delivery is – as previously noted – more suited for stage. Debbie doesn’t do much in this episode, but she gives Holden pivotal academic insight into how he should approach applying psychology to catching criminals. Smart women rock.

“Good, evil, black, white. It’s easy. But who in this room has a life that’s easy?” Holden asks a room of police officers.

Joe Penhall, the show’s creator and main writer, knows the answer and we do, too. In one scene Holden and a fellow FBI instructor sit at a bar and decry a world fallen to chaos, between changes in society to violence at Kent State. It’s hard not to nod along, because our present times reflect a similar feeling of chaos. Fincher and Penhall are telling us about our own vicious cycle of violence and destruction, which has been a recurring theme in Fincher’s past work.

A more conventional show would have been about the chase to find a killer and solve a case. The show has teased a few serial killers that we’ll encounter, including Ed Kemper starting in episode 2. This show seems far more interested in being a quiet meditation about the nature of behavior, our deviencies, our environment, and our need to explain what goes bump in the night. It’s a nice change and sets it apart from network television fare like Criminal Minds, and even prestige cable fare like True Detective.

Episode 1 was fine. It was a relatively effective teaser for what I hope will be a deep dive into the psychological underpinnings of criminal behavior. The things that I didn’t think were as effective (the delivery and dialogue) may not be issues in future episodes. What makes episode 1 stand out is the patience it’s asking for from the audience and FIncher’s direction. His dark and flat color palette is always welcome on my screen and this show’s look evokes his classics, like Seven and Zodiac. If this quality keeps up, Mindhunter should prove to be a worthwhile experience. My wishlist for the next episode is for the pace to pick up a little and for Holden and Bill make some progress. I look forward to seeing Anna Torv on my screen again (I miss you, Fringe), and seeing how they portray well-known serial killers.

Nectar of the Godzillas - KING KONG VS GODZILLA (1962) Previous
Review: PROFESSOR MARSTON AND THE WONDER WOMEN Next