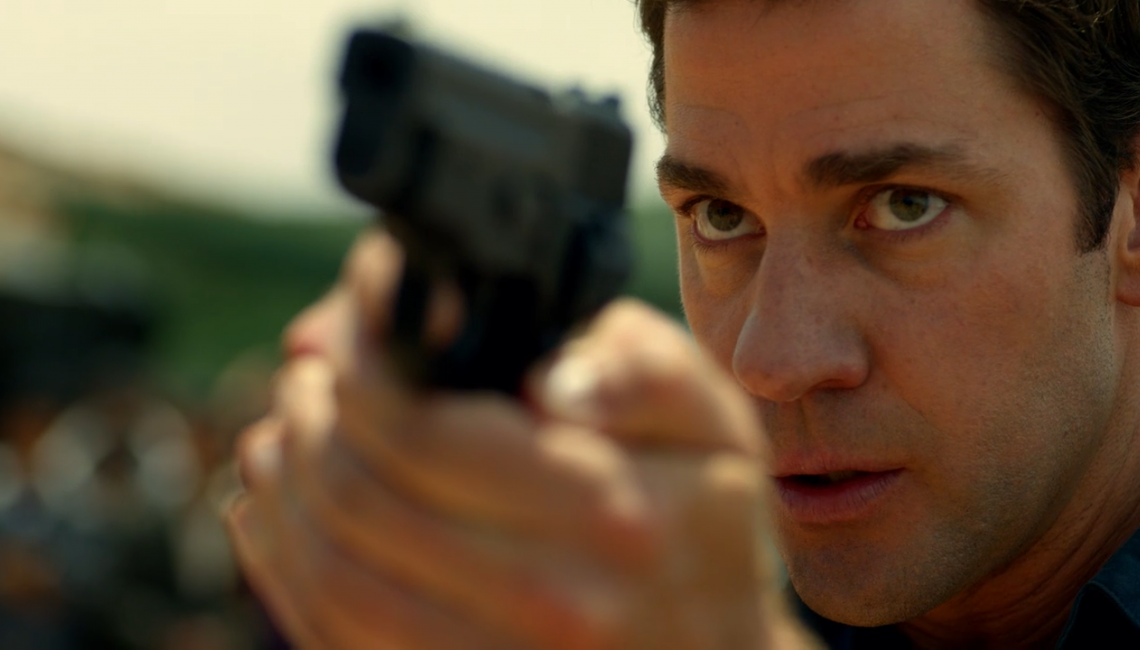 The thematic crux of Season 1 of Jack Ryan, “Sources and Methods” puts our cast through a spiritual gauntlet. Wrapping up one of our main driving plotlines, the episode also digs up (heh) a new one, balancing overall season cast engagement in some refreshing ways. Let’s dive into the details.

Starting off with a flashback to 6 months ago, we find that Suleiman and Ali visited Liberia digging up a body from a WHO Ebola graveyard. Six months later, Cathy Mueller is working the case of a Liberian man who shows symptoms of treatment-resistant Ebola. I don’t think this is a coincidence. At the same time, Jack and Greer are in the field chasing down a lead on the whereabouts of Hanin and her children from last ep’s agent Lance Miller. They arrive in Turkey at precisely the same moment as Tombstone, who has clearly decided to take a little PTO in light of his existential crisis. Meanwhile, Hanin is just trying to get out of the country with her children as quickly as she can. But things take a horrific turn when who should be waiting to spot her at a refugee camp, but Yazid (Suleiman’s henchman, all around gross prick, and possibly part-terminator). Forced to flee the camp on foot before her transport leaves, the rest of the episode is a race against the clock for Jack and Greer to finally bring Hanin and her children into safe custody.

Let’s talk about these plots! As I mentioned, this episode works as a sort of a crucible for nearly all of the main players. What’s excellent about this episode is its use of crucial timing as a plot device. Like some of Clancy’s best work, the tension is bred from our wide array of principals all working with different pieces of a puzzle, totally independent of each other, toward co-aligned goals that if successfully achieved will help to snatch a small victory from the jaws of defeat. A victory that’s symbolic on the surface (the lives of an innocent mother and her children) but will of course play a major part in the larger game to come. It’s wonderful to see Cuse wend these threads into a convergence akin to some of the most fingernail-chewing moments from The Hunt For Red October. What’s even better is the tight and impactful way that each of these stories serve the overarching themes of the episode, and the show as a whole.

Hanin, a hair’s breadth ahead of her would-be assassin throughout the episode, is desperately working to keep herself and her children alive and out of Yazid’s clutches. The family is fighting tooth and nail for any semblance of safety, and they are pushed to the edge physically and emotionally in their journey to the coast, which offers only the slimmest chance of survival. Even if they are successful, they may very well die on the ocean. Jack and Greer must plumb the lowest depths of Turkey’s underground to find the information they need to get to Hanin in time. This means relying on one of Lance’s contacts in the prostitution racket, Tony. Tony is a scumbag, if a somehow endearing one. Numan Acar imbues this guest role with a humor and an insight that make him an immediate standout. And his cheery demeanor and embrace of vice and crime set Jack’s teeth immediately on edge. Jack Ryan is not the kind of guy who works well with scumbags, and seeing the women that Tony has enslaved to a life of drugs and sex work infuriates him. Greer, either a little wiser in the ways of the world or just a bit more cynical, has to coach the neophyte agent in the shades of grey within which the CIA must operate if they are going to rescue Hanin and her family. After all, good and decent folk aren’t usually on-hand as experts in crossing borders illegally. Still, Ryan’s barely concealed disgust with Tony and the den where he runs his business threatens to boil over every minute they have to work together, even while it illuminates the immense privilege and ignorance of Jack’s life up to this point. Acar plays Tony as a guy who sees right through Ryan’s protected perspective, nailing him to the wall in one of my favorite scenes of the entire season.

“You don’t like me. You think you’re the good guy, I’m the bad guy. Maybe you’re right. But maybe, if I was born in a nice city in America, like Cincinatti? I could be the good guy too. Geography is destiny, my friend. The world is the kiln. We are the clay.”

Running concurrent to these storylines is the ultimate end to Tombstone’s troubled journey, which illustrates a powerful, if somewhat surreal reflection of the themes of the season as a whole. Forced into taking time off after raging at having obliterated an innocent man, Tombstone treks to Syria (by way of Turkey) to find his victim’s family. Tombstone has tried every method he can think of to absolve or destroy himself, and his final decision is a desperate plea to the only people in this world who will let him feel any culpability, as they’re the only people who know just what he has taken. Tombstone’s ultimate role in the story is to demonstrate a single man breaking free of the cyclicality of violence and oppression that has shaped the world he has anonymously served for years.

This episode is the one I was most excited to write about. It’s fraught with tension, wonderfully acted, and works as a sort of a thematic coda for the series as a whole. This is the one where all the chickens come home to roost, and where we finally enter the endgame regarding Suleiman’s horrific plan. John Krasinski is excellent in this episode, playing a hard-edged coldness that we’ve never seen from him before. He seems lethal in his determination and in his resoluteness. Wendell Pierce and Numan Acar do wonderful work exposing the potential hypocrisy and ignorance at the center of Ryan, who has maybe never had occasion to question whether his all-American values are just a little bit naive in the face of the people his system has stripped everything from in decades of dispassionate violence. Pierce deserves top marks here for a scene that takes place after the main action is finally concluded. Greer tells Jack exactly how he got disgraced in the first place and the scene works as pure drama. It also works as the perfect cap to the series to this point, as it challenges Jack to make his choice as to whether he believes he can fight to do right and make a difference and keep his soul. In some ways, this scene is a perfect mirror of the conversation that Nick Fury and Steve Rogers have in Captain America: The Winter Soldier, with Sam Jackson bartering for Chris Evans to see the world as the damaged and fragile place that he does, all the time basically begging him to prove the cynical and pragmatic Lord of Spies wrong. To give him a little hope.

Our First Look at the Cult-tastic APOSTLE Reigns Down... Previous
The CAPTAIN MARVEL Trailer Flies into Our Hearts and... Next