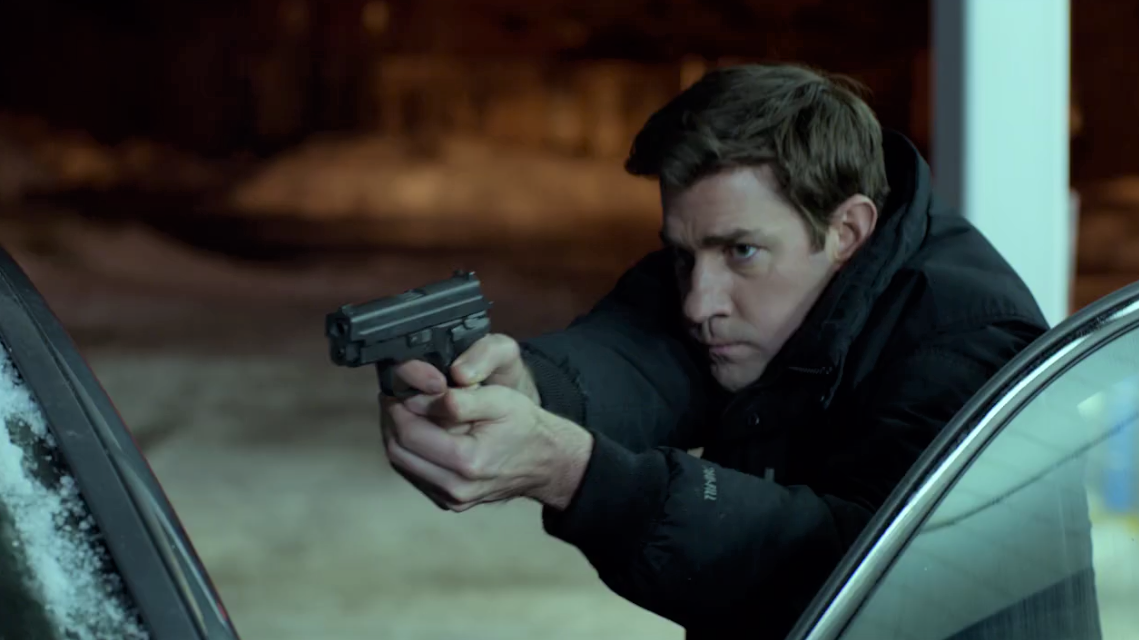 We open upon a scene along a snow-lined highway in France. Suleiman’s brother, Ali, has been pulled over by a French highway patrolman, one who is called off by DGSE only seconds before his life would have been ended. So begins the incredibly tense fourth episode of Jack Ryan, one that will push our characters to their brink and for the first time provide the viewer with a glimpse into the horrifying scope of what Suleiman is planning.

After an argument between Jack and Sandrine over whether their surveillance strategy is an intelligent one, and a rather hilarious exchange between Greer and a rather intolerant DGSE officer, we cut to Suleiman, who is taking further steps to implement his plans. Noting the capture of a team of American doctors by an ISIS cell, he and his men leave for their compound, in a move that will prove to be one of the most significant ones that he makes over the course of the entire season.

The show then treats us to the beginning of a series of delightful exchanges between Jack and Sandrine regarding Jack’s love life. Feeling that Jack is not being aggressive enough in his pursuit of Cathy, Sandrine goads him into sending a rather bold text, only telling him after it is sent that while the text was perfectly calibrated for a French woman, that she isn’t sure how an American will react to it. The rapport established between Jack and Sandrine is a highlight of the show and the contrast between the two provides a fantastic mechanism by which to illustrate how Jack interacts with the world around him.

From there we jump to a scene that serves a very similar function for Suleiman. Having arrived at the compound of Sheik Al Radwan, we are allowed to contrast Suleiman with another religious extremist, one to whom he has been compared before, and within there, gain further understanding into who Suleiman is as a man. Unlike Al Radwan, Suleiman isn’t a full on zealot. He doesn’t dress exclusively in religious attire, nor does he enforce it in totality on his followers or those around him. He isn’t interested in sectarian divisions. While a religious man, and one quick to use religious rhetoric to rile up his men, his actual goals and motivations differ. Bribing Al Radwan’s men, and painting him as a man leading them astray, Suleiman manages to consolidate power and strengthen his hold on the region.

Jumping back to Jack and Sandrine, we quickly find ourselves in one of the most hair-raising scenes of the whole series. Stopping over at a gas station so that they can refuel and so that Sandrine can stock up on cigarettes, Jack and Sandrine stumble upon Ali entirely by accident after he had abandoned his vehicle and stolen another. What had been a quick rest and refuel suddenly erupts into white knuckle gun fight that leaves Sandrine mortally wounded and Jack pursuing Ali on foot alone. The fight that occurs when Jack catches up to him is intense and brutal, but Jack manages to gain the upper hand — proving once again the lie in his constant claims that he is in over his head — as he ends up shooting Ali dead after the man provides him no other options. Despite his protestations, Jack is every inch the wolf that Sandrine knew him to be.

Flying back into DC shaken, Jack turns to a newly scheduled date with Cathy to decompress. What unfolds is a delightfully charming first date, which gives us the first chance to really experience the relationship dynamics between two characters who have served as the moral backbone of so much of Clancy’s work. While Jack is clearly telling several lies about what he does for a living, the ease at which the two interact, and the off the charts levels of charm that Krasinski is bringing to the part allows us to already gain a sense of the inevitability of their relationship. This all culminates in a rapidly escalating night cap that turns up the heat of their still new romance considerably.

Far from being done, however, the episode has one more card to play. Finally, the cause for the murder of the French priest earlier in the season is revealed, as Suleiman’s men in France unleash a horrifying sarin gas attack in the packed church during his funeral service, resulting in the gruesome deaths of all in the church. The threat Suleiman posed has been realized, and he is just getting started.

Review: PICK OF THE LITTER Previous
The Dawn of Dad Media: The Novels of Don Pendleton Next