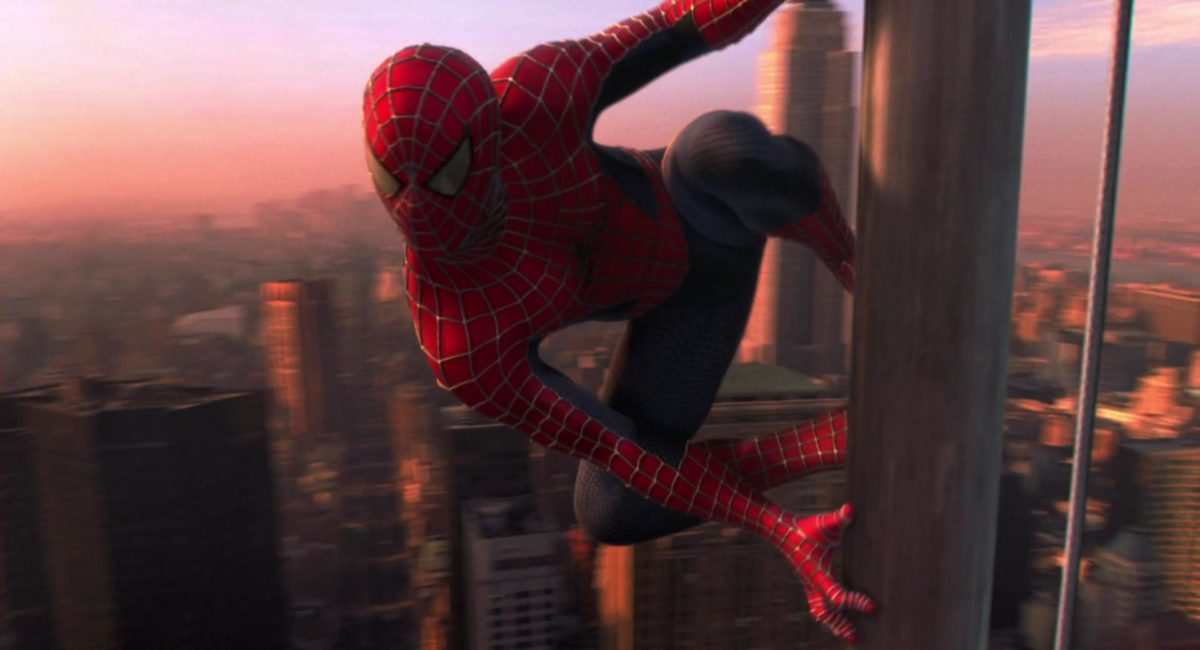 No superhero is more connected to a real-world location than Spider-Man is to New York City.  It’s so ingrained into his character that, in practicality, his superpowers would be fairly useless outside of the Big Apple1.  From the Empire State Building to his dwelling in Queens, the DNA of Spider-Man is rooted in location, location, location.  It’s this connection to the city that made this probably the most perfect trailer for Sam Raimi’s first Spider-Man film in the summer of 2001:

As you may have noticed, the World Trade Center features prominently in that trailer, as it also did in the original teaser poster where Spider-Man’s eye reflects the towers amongst the New York skyline.  Pre-September 11th, it was a perfect visual shorthand for the city, as the WTC was a singular image in America’s most iconic city, likely second only to the Empire State Building or the Statue of Liberty in terms of layman renown.  It was a quick and easy way of introducing us to the character and city that we’d be spending the next decade celebrating and rooting for.

But in a post-9/11 world, those towers represent so much more than just NYC.  They’re a reminder of both tragedy and bravery, but also of a different time;  a time before terrorism was a monthly occurrence and a daily fear, before two failed “wars on terror”, and before cynicism, racism, and hatred took over the national discourse.  It’s hard, as someone who came of age in the 21st century, to remember the world before 9/11.  But Sam Raimi remembers, and his cinematic Spider-Man made a stark decision to embrace both sides of the pre-and-post-9/11 coin and became the first true blockbuster of the post-9/11 era.

As Allen wonderfully waxed poetic about yesterday, Spider-Man is a reflection of our responsibility to the world around us.  He’s a character who’s meant to inspire us; to call into question “What is the highest good that I can do with the talents and gifts bestowed upon me?”  For all the faults of Raimi’s first Spider-Man film, he understands this core of the character from the inside out, and it’s the basis of the best scene in the film — the bridge rescue:

Here we see Spider-Man doing his thing: slinging webs and saving kids all while trying to protect Mary Jane Watson.  But he can’t do it all, so he leans on the citizens of New York, allowing him to deliver the tram car to a barge while everyday people risk everything to distract Norman Osborne as the Green Goblin from attacking Spider-Man.  It’s a fist-pumping moment that leans on both this idea that superheroes, Spider-Man in particular, are meant to inspire us but also harkens back to that instantaneous feeling of national unity surrounding the events of 9/11.  Everyone was an American and everyone was a New Yorker.  It was one of those  “I ♥️ NY” shirts in cinematic form.

What’s truly great about this single moment in the film is that it isn’t shoehorned in or feel like a fake “pro-NY” sentiment that got thrown in per studio demands after the terrorist attacks the prior year.  It’s a pure Raimi moment, filled with earnestness and honesty that never apologizes for it’s potential corniness, and it’s a perfect encapsulation of the character from the comic books as well as an encompassing of the thematics of the film — that with power comes responsibility.  Those New Yorkers had the power and opportunity to make a difference, and they did.  It’s a simple note that encompasses how Raimi was not only able to introduce the world to both Spider-Man in film and a new generation of superhero filmmaking, but also as a tribute to the men and women who sacrificed everything to wield their “power” for good in the face of unprecedented terror and devastation as well as a love letter to New York City itself.

Spider-Man isn’t a billionaire or an alien or a super-soldier or even an Amazonian demigod.  What he is is an all-American kid from Queens who wants to use what powers he has, super or not, to help other people.  Raimi’s first film embraces Peter Parker’s mantra, “With great power comes great responsibility,” and uses it to both inspire us, teach us, and heal us from the wounds of the past.  Spider-Man might not be the best superhero film2, but its ability to embrace a post-9/11 America made it the perfect summer film out of the gate in 2002.

NYAFF Review: THE ROAD TO MANDALAY Previous
Your Unfriendly Neighborhood TURKISH SPIDER-MAN Next