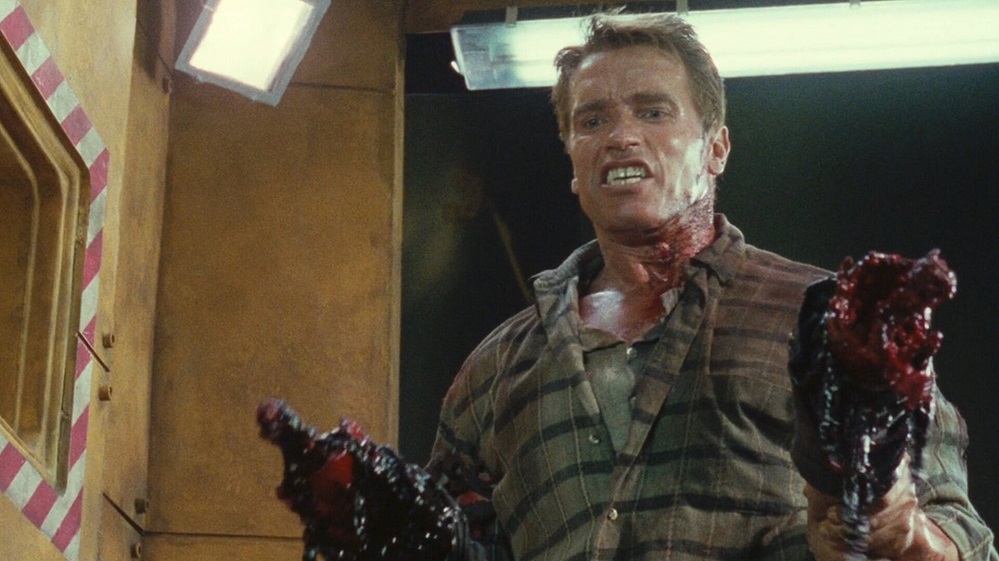 We’re back! And I’m back! Thanks for bearing with me and suffering through Shannon handling show notes last week.1 I know it was a difficult time for all of us, but together we made it through. We’re now a stronger community, ready to handle whatever fate throws our way. In this weeks case, that’s the Arnold Schwarzenegger star-vehicle Total Recall, directed by Paul Verhoeven.

That’s right, we finally got to what should have been this show’s meat and potatoes from the beginning: a Schwarzenegger one-liner-and-murder feast. We had two opportunities to get there, too, as my choices for the cube were fully focused on my beefy muscleheaded favorite. I put his 1999 apocalyptic fight against Satan, End of Days into the cube in addition to Total Recall. Meanwhile, Ryan was a girly man and picked non-muscly films like Vietnamese action flick Furie and the comedy Kids in the Hall: Brain Candy while Shannon was too busy being a high-falutin’ four-eyed nerd and picking the classics His Girl Friday and Assault on Precinct 13. What a bunch of dweebs. I’m glad our podcast was able to cultivate some mass and got to experience Total Recall instead

Also discussed are my continued affinity for the rock band Ratt, Ryan’s seething hatred of Dallas strip mall office buildings and video calls, and the weird recurring theme of cuckoldry in our films of late. Plus we try and break down Ronny Cox’s villain’s plan in this film, but are left scratching our heads more than actually solving the conundrum. Additionally we renamed our podcast in honor of my state’s senator, so please only refer to us from now on as Kyrsten Sinema Chance Cube.

This episode also marks the beginning of our newest regular segment which comes from the depths of my extremely stupid brain: Keeping Up With The Cardassians, where we find connections between the films we watch and my favorite show, Star Trek. This week had a lot of connections, as a ridiculous number of cast members had guest, recurring and even main roles on the various incarnations of Trek. And that’s even with me forgetting to mention that Jerry Goldsmith did the score for both Total Recall and five Star Trek movies as well as the themes to The Next Generation and Voyager. A real Power Mind I am, folks.

Please like, rate, review, share, subscribe and all that good stuff. Give us some comments in the section below as well. We want to hear from you, dear listener, about what we can do better, even though we already know that we’re perfect.