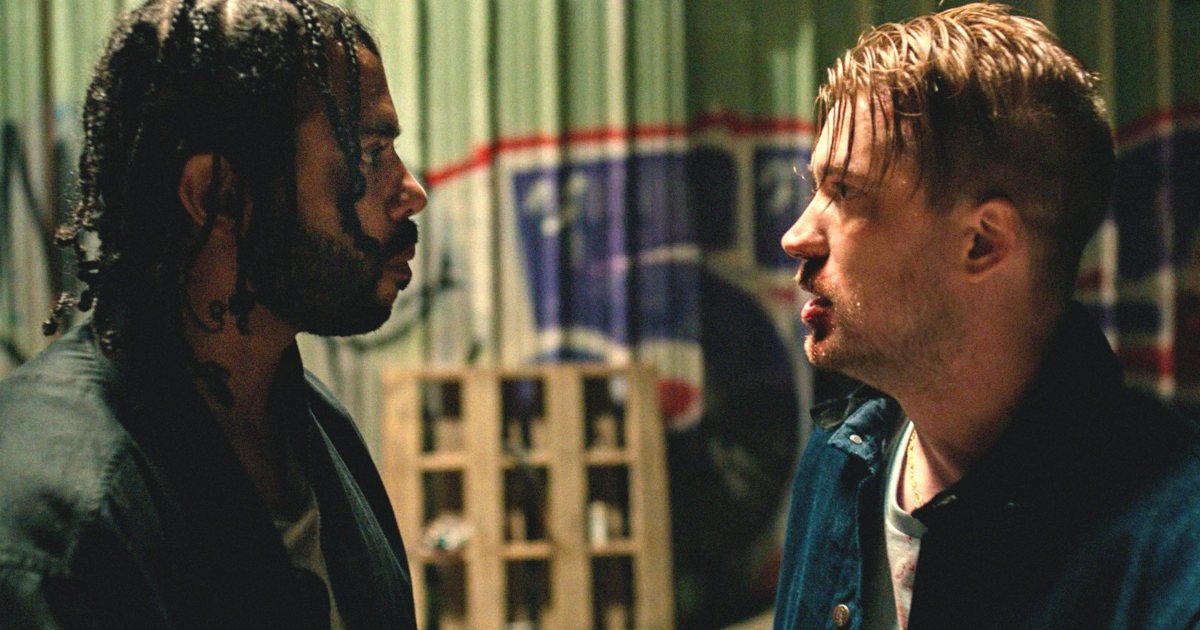 Co-written by its two lead actors and directed by a feature film debutant, Blindspotting is the kind of raw and personal film that could only come from artists hellbent on taking over the world.  The explosive screenplay by Tony award-winner Daveed Diggs and poet Rafael Casal, combined with the rhapsodic direction by Carlos López Estrada, manages to be both a hilarious love letter to the city of Oakland and a politically charged drama without skipping a beat.  Blindspotting feels like a modern update of Do The Right Thing — a Spike Lee-esque film for the West Coast that is brimming with life and tenderness without ignoring or glossing over the darker, uglier underbelly of American life.

Diggs stars as Collin, a convicted felon who is three days away from fulfilling his year of probation and halfway house living.  He spends most of his days working for a moving company with his best friend Miles, played by co-scribe Rafael Casal. Unable to leave Alameda County without violating his parole, Collin spends most of his time outside of work hanging out with Miles, who has a violent temper and is prone to making stupid decisions.  Collin’s life gets turned upside down when he witnesses a police officer (played by Lewton Bus fave Ethan Embry) gun down a man in the streets on his way home from work, causing him to question his own choices in life, the gentrification of his city, and his relationship with Miles.

You see, Miles is white, meaning he’s often mistaken for a gentrifying outsider in his own hometown.  He’s got a neck tattoo of the city and state on his neck, a grill, a black girlfriend and biracial son, and he walks and talks like he’s trying too hard to be hard.  Because he is trying too hard.  Blindspotting is openly about gentrification and how Oakland has changed, but it’s ostensible focus is about identity.  Every character in the film struggles with who they are, from Collin trying to be a good man with a felonious background, to Miles struggles with being a white man born in a predominantly black city.  Collin is afraid that being a black man is going to leave him dead in the streets by a police officer who doesn’t even live in the city, and Miles is worried that he might as well be dead if he’s going to be considered a colonizer in his own home. The Silicon Valley tech explosion has affected their lives almost as much as their criminal and familial backgrounds.

Subtlety isn’t on Blindspotting’s mind, as the film’s themes are explicitly discussed by the characters of the film.  Often times in emotionally charged moments Collin and Miles will break out into a beat-less impromptu rap, showcasing both actors ability with poetry and spoken word.  To describe Blindspotting as a musical wouldn’t be technically accurate, as there are no song-and-dance numbers to be found, but López Estrada uses the form of a musical to express characters internal monologues.  It’s a brilliant choice, as both leading actors have incredible skills with the form, with Diggs and Casal shining brightest when they’re given free reign to break into a flowing cadence.

Blindspotting isn’t interested in beating around the bush.  In a world where toxic masculinity is leading to the preventable deaths of men, women and children around the country, it’s not a bad choice to have an open conversation about identity and how a changing landscape affects it.  This is a film that isn’t afraid of the racial implications of this conversation either — the climax violently and earnestly pits both our leads’ white and black identities against each other. It’s overwhelming and downright difficult to watch; in fact, many of the film’s scenes are so intensely chilling that it makes the Diggs, Casal, and López Estrada’s ability to balance tone that much more impressive.

This is because Blindspotting isn’t just a drama.  At its heart, this film is a comedy that just happens to be about weighty, complicated issues.  This film is littered from start to finish with jokes that are expertly put together, both on the page and on screen.  There are visual gags and reveals that are gut bustingly funny, and Casal and Diggs have a comedic chemistry together that makes every moment they’re on screen together feel like two friends cracking wise, no matter if their jokes were improvised or on the page.

Daveed Diggs is a star.  A standout cast member of the biggest Broadway smash in years, he’d already established himself as a household name, but here he has established himself as a force to be reckoned with.  Casal is similarly incredible here, bringing to life a character who could have been grating and instead making him sympathetic and even charming. And López Estrada doesn’t show any signs of being a first time feature director, using his talents as a music video director, where you only get 3 minutes to tell a story, to make every scene feel lively and essential.

Which is the best word to describe Blindspotting: essential.  Do The Right Thing is one of the greatest films ever made, and I don’t make my earlier comparison to it lightly.  It’s a film that walks such an incredible tonal tightrope and manages to succeed at all of its goals.  Funny when it wants to be and tear-jerking when it needs to be, Blindspotting is a film that handles serious topics with the appropriate gravity, but with enough grace and humor to not become maudlin or cloying.  Blindspotting is nothing short of a magnificent achievement.