Review: ALWAYS BE MY MAYBE 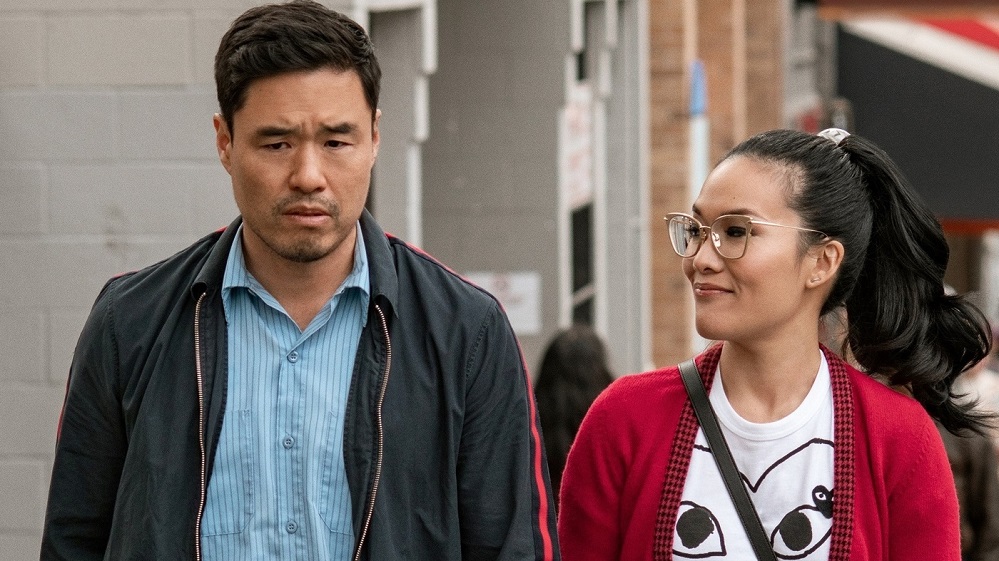 Have you heard? East Asian-Americans are rom-comming it up in Hollywood. First Crazy Rich Asians, then  To All the Boys I’ve Loved Before, and now Always Be My Maybe, smart writers and actors are using comedy as a vehicle for showing another side of Asians, that they can be fun, hot, and romantic just like anyone else.

Directed by the superbly talented Nahnatchka Khan, Always Be My Maybe stars Ali Wong and Randall Park as Sasha and Marcus, childhood best friends and neighbors in San Francisco who reunite after 15 years of estrangement. Sasha is now a world-renowned celebrity chef who is back in San Francisco to open a new restaurant while Marcus seems to have never left, literally and figuratively. He’s still living at home, helping his dad run his heating and air conditioning company, and he’s still playing in the same band he was in during high school, Hello Peril. When Sasha and Marcus reconnect, Marcus’s feelings for her bubble back to the surface.

Unfortunately, there is a major obstacle because Sasha has met someone new, and you must be living under a rock if you don’t know who it is by now, with the endless gifs and memes.

That’s right – Marcus has to compete with Keanu Reeves.

If it’s surprising that Keanu Reeves shows up as a love interest in an Asian-American rom com, essentially playing a pretentious, weird version of his own public persona, keep in mind that Keanu Reeves is Asian. He is of Chinese-Hawaiian heritage, and not in an Elizabeth Warren kind of way. Wong and Park have talked about how this was their way of reclaiming Reeves as Asian, and they’re right. It’s about time we got him back. He stopped the bus, saved the world, dodged some bullets, and rescued a dog, and he did it while Asian.

Always Be My Maybe is so distinctly East Asian that I was yelling and cheering while watching from my sofa. Wong and Park understand that those cultural experiences are captured most appropriately in small moments, like a young Sasha making herself a rice and Spam dinner, and observations, like Sasha remarking that every car she sees driven by an Asian person has a handicap pass, as well as the way characters walk into a home and immediately take off their shoes without a reminder. It’s not in the movie as a wink or as an amuse-bouche of a reference; East Asian experience (specifically Korean and Chinese) is woven throughout the movie and coming from the mouths of its leads, it’s just natural.

Wong and Park have such fantastic chemistry that it’s clear they (and co-writer Michael Golamco) built Sasha and Marcus’s longtime friendship on their own (they met at a UCLA improv club Park started). Sasha and Marcus so easily fall back into their friendship, but like all good rom-coms, there’s going to be a Pretty Woman/fish out of water obstacle. In this case, it’s nice to see it subverted; Sasha is a famous chef and restaurateur. She has the power and the money and the social capital to move in any world she wishes to be in, and Marcus is the heating and air conditioning maintenance guy who smokes too much weed and plays in a local band.

The movie rightfully doesn’t quite shame Marcus for his lack of ambition (Hello Peril is actually a great band), but calls him out for using it as an excuse — he’s so unwilling to take any risks. He’s terrified that he’ll do the wrong thing, and so he never tries. As his father says, he thinks of himself as a caregiver so he never has to leave. It’s refreshing to see an Asian guy just plain live like he has nowhere to be and nothing to do (l bet it made some Asian parents recoil in horror though).

It’s so clever to see that some of the conflict between Marcus and Sasha is not just because he feels like a cheap accessory on her arm, which would be a typical rom-com feature, but that the true conflict revolves around food and identity, where the stakes are higher. To Marcus, Sasha implicitly values the opinions of the white people who enjoy and uphold her food and she never critiques their implicit decision to believe her food is authentic when she, Marcus, and other Asians know it isn’t authentic just because it’s coming from an Asian woman. By not rectifying their thinking while she takes their money, Sasha seems to be betraying a part of her past, one that taught her that a home-cooked kimchi stew could be delicious and real.

Crazy Rich Asians also used food as a metaphor for identity. Cultural food is so important to us. It’s not just sustenance, it’s what we turn to for comfort, for a reminder of home (wherever it is), for ingredients that we don’t get everywhere, and for techniques passed from generation to generation. It’s how we communicate belonging amongst each other. It’s also just plain delicious. One of the funniest jokes in the movie is Marcus learning Cantonese (Marcus is Korean) just to get better service and free shumai. Good food transcends language.

It’s this attention to detail and how we communicate that help give the movie authenticity. Likewise, the foresight into turning Keanu’s relatively small part into something truly weird. It could have just been a cameo and no further, but the movie escalates a disaster of a double date into an even more hilarious and disturbing thing. Reeves signed on after meeting with Wong and Khan, and even contributed ideas to his scenes, like when he randomly starts listing the names of Chinese dignitaries or giving Park a suggestion about adding more of Marcus and Sasha’s love story in Hello Peril’s song, “I Punched Keanu Reeves.”

In white-centered rom-coms, supporting best friends have been people of color who are written thinly and this has mostly not gone unchanged. So that’s why it’s an interesting crossroads when you get to POC-led rom coms because there are more choices simply because we presume the writers, actors, and producers are more aware and you hope the supporting best friends have more depth to them. The supportive best friends in Always Be My Maybe are also POC. Tony, played by Indian-American actor Karan Soni, and Veronica, played by African-American actor Michelle Buteau. Though they each get personality details sprinkled in neither have much of an arc. Veronica is a lesbian and dispenses great advice but her partner never gets a line and we only guess that they’re overjoyed. Tony has lost a lot of weight, presumably to have a healthier life, though the only result is he remarks he’s hungry all the time but also can wear a slim cut shirt.

There’s a glimmer of something deeper when Tony calls out Marcus for not noticing his weight loss, a sign of his poor friendship skills and selfishness related to being afraid of change, but it dissipates quickly. This results in a rom-com with typical rom com tropes, including supporting characters who aren’t as deep as they could have been, which stands out when these two get bigger roles than other characters, but not nearly as much depth as someone like Marcus’s girlfriend, Betty, who helps kids at community centers with artistic expression (and has dreadlocks, a weirdness that is commented on to be funny but never critiqued for being appropriation or simply in poor paste).

Overall, Always Be My Maybe is a breezy, lovely movie though, with a surprisingly sentimental and loving end, and there is a lot of charm, completely buoyed by the friendship and chemistry between Wong and Park.

We’re in a wave of movies centering East Asian-American experiences. Though the idea for Always Be My Maybe has been kicking around since way before 2016 when Wong told The New Yorker that she and Park wanted to make their own rom-com, it came to fruition after studios – perhaps seeing the writing on the wall – tried to quickly snap up the project. We are all benefiting from East Asian voices carving out a niche like this one, one that is wide enough and deep enough for comedy, charm, sexiness, and fun and allows for complexities and uses unique East Asian-American perspectives as tapestry to enrich their world and ours. When faces like mine and experiences like mine are centered, it’s transcendent (and dare I say, transdenominational).