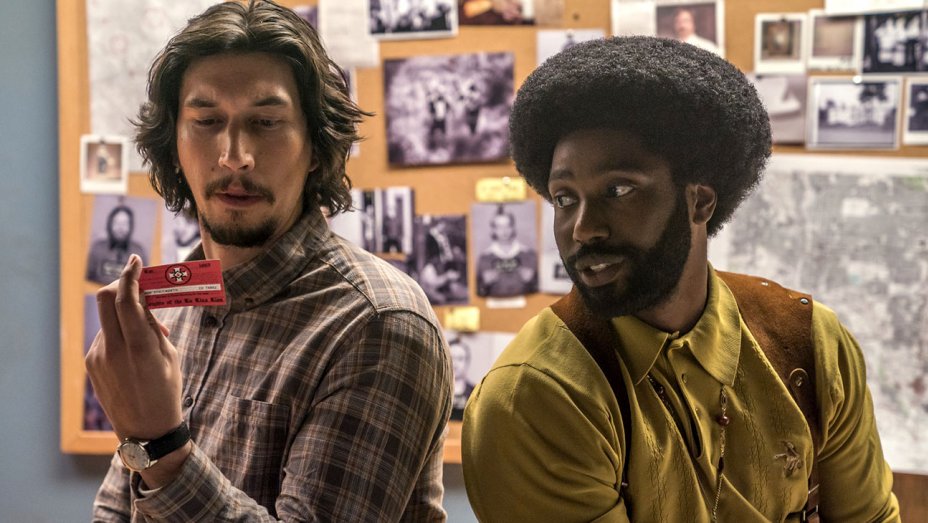 There is power in the truth, and Spike Lee has always known it. His movies, from Do The Right Thing to Chi-Raq, carry with them a streak of boldness. He is not a subtle filmmaker, and BlacKkKlansman is as subtle as a jackhammer going off at 5 am. It will stick with you, and it will terrify you. It will also make you laugh and gasp and grit your teeth in anger. It will also leave you still as you watch a master of cinema display black resistance as a foundation for the future.

With BlacKkKlansman, Lee presents the truth in its full ugliness, though the draw of the movie itself is actually fiction. The movie poster bills it as the “crazy, outrageous, incredible true story”…of a black police officer who called the Ku Klux Klan, pretended to be white, and actually became a member. No, really, it’s true. That officer, Ron Stallworth, and his white partner, joined the Klan in the 1970s. Black Ron played a white man on the phone while white Ron attended Klan meetings in person.

What’s being sold in the trailers, this zany story of a black man who became a Klan member, isn’t the meat of the movie. It’s the plot, but it’s not what Lee wants you to focus on. The investigation is really a vehicle (no Adam Driver puns intended) for Ron and his partner, Flip, to come to terms with their own roles in a resistance, and for us as the audience to think about the same. BlacKkKlansman also spends time showing the black power movement, using Patrice, the president of a local university student union, as a stand-in for Angela Davis and other black leaders of the time.

Don’t get me wrong though – the plot is great, and well-balanced. At times, the movie is a thriller, a tense and suspenseful story. At other times, it’s an oral tradition of family members talking to each other and the elderly imparting lessons to their grandchildren. Both are a natural fit in this movie, even when Lee goes back and forth between them. The humor in BlacKkKlansman is also a natural fit, particularly the visual gags. It is a pretty funny movie, but you’ll laugh as much to cope as you will at the cleverness.

Despite the setting, BlacKkKlansman is not really about the past. It’s about our present and our future. Ron Stallworth may have conducted his infamous investigation in the 1970s but everything we hear in the dialogue is an extremely overt nod to today’s news. It is so overt that everyone in my audience laughed together out of recognition. It’s not that the times have changed, it’s that they didn’t change at all and we only thought they had. What fools you are, Lee seems to be saying, both to Ron and to us.

John David Washington is stellar. He plays Ron as a guy who just wants to be good, though the movie doesn’t establish his motivations for being a cop until very late. It’s a minor quibble and has nothing to do with his performance, which is layered and full of a quiet strength. He has to go along to get along, at least until he has the power to change the game for himself. I know there are broader themes and lessons here for all of us, and I look forward to thinking about this more.

Adam Driver is one of the best actors of his generation, and he’s stunning as Flip despite having an underbaked personal story. Flip is Jewish (an element that was added to the story), and so he should have some “skin in the game,” as Ron tells him. Unfortunately, all of that comes out through one scene of dialogue. It’s great dialogue and Driver knows exactly how to use it and imbue it with emotion and pathos. Lee shoots up close in this scene, framing only Driver’s face as he talks about being around the Klan. Likewise, Ron says he supports the uprising of black power and supports his black brothers and sisters, but the movie doesn’t fully address the inherent conflict (again, this is a commentary on our present times) between being a police officer and being a member of an oppressed community. I would have liked to see more of Ron and Flip dealing with the conflicts within themselves.

Much is going to be written about Topher Grace as David Duke. I think with other movies, other directors, and other actors there would be an impulse to have Grace play broadly. Here, he’s subtle and gentle and Grace uses it as a weapon. Duke is menacing because Grace knows how to modulate his tone. He plays Duke as so normal and polite, because he looks like someone we know. He’s evil personified in a suit and a smile. Again, Lee is not subtle with this imagery. I won’t spoil the ending, but once you see it you’ll realize that everything in the preceding 2 hours has built up to the end and has brought it full circle.

Lee lingers in BlacKkKlansman, knowing that it will make us uncomfortable. The thing is, he doesn’t care. He focuses on the imagery of the Klan and their sympathizers because he wants you to watch the monsters and to understand they are human. Gaze upon the faces of men and women who could be your fathers, mothers, husbands, wives, neighbors, and friends, and think about the evil they may keep in their souls. Tell me you don’t wonder about some people around you, whether it’s the guy who gives a little nod at Fox News playing on the break room television or the aunt who posts memes on Facebook? Or you don’t just straight up assume people are not to be trusted until they’re proven worthy, for your own sanity. I don’t feel shame in my anxiety and apprehension, and I’ve long stopped letting people gaslight me into thinking I’m overreacting. I’m ready to get to work, even if it’s not enough. As Kwame Ture says in the film, if not you, who?

Review: NEVER GOIN' BACK Previous
Review: THE MEG Next