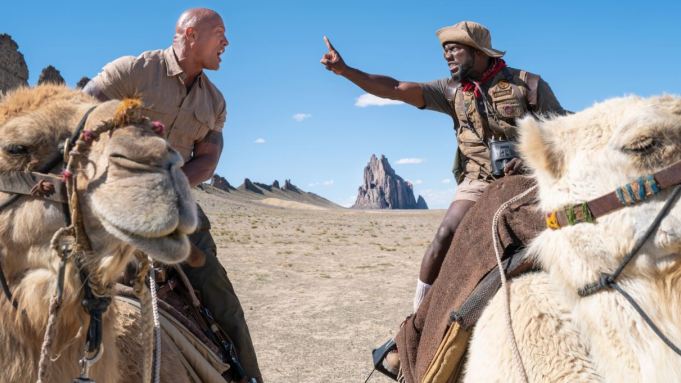 Two years ago, Jumanji: Welcome To The Jungle proved itself something of a surprise hit. A 22-years belated sequel to the 1995 Robin Williams vehicle that starred possibly the biggest movie star on the planet1 and a pre-fall from grace Kevin Hart, it being a runaway success probably shouldn’t have been much of a surprise in hindsight. Still, Welcome To The Jungle came closer to outgrossing The Last Jedi than what most would have predicted, so it’s no coincidence that it’s sequel, Jumanji: The Next Level, also drops in close proximity to Star Wars territory.

For a movie thoroughly disinterested in its own plot, The Next Level still has a whole lot of it. After getting sucked into the game, dejected teen Spencer (Hereditary’s Alex Wolff, who is no more convincing as a teenager than as someone who is supposed to be the offspring of Toni Colette and Gabriel Byrne) has ostensibly grown closer to Fridge, Martha and Bethany, the classmates that got Jumanji’d with him. But when they all decide to meet-up and Spencer doesn’t show, the threesome goes to his grandpa Eddie’s (Danny DeVito) house, where they quickly hear some all-too familiar drums and find the unnamed console the Jumanji game is played on broken, but also turned on.

But that’s not all! Eddie is currently getting a very unwelcome visit from an old business associate (Danny Glover, more likeable than he has been in years in a grand total of five minutes screentime). So, because of the Jumanji console malfunctioning, the moment the kids try to get back into the game to find Spencer, Bethany gets left behind, while Milo and Eddie get sucked in with them. But they didn’t get to pick their avatars, so everyone is all scrambled. Shy introvert Martha still takes the form of scantily-clad femme fatale Ruby Roundhouse (Karen Gillan), but Eddie becomes muscleman Smolder Bravestone (Dwayne Johnson), Milo becomes zoologist Mouse Finbar (Kevin Hart) and star athlete Fridge becomes fat cartographer Shelly Oberon (Jack Black) So, in case you were wondering: this is indeed a movie where Dwayne Johnson and Kevin Hart spend 80% of their screentime doing curmudgeony old man impressions.

While dedicating your entire movie to a shtick that could wear out it’s welcome after fifteen minutes doesn’t exactly seem like the best idea in the world, it works here for a very simple reason. Danny DeVito and Danny Glover are very funny, so Dwayne Johnson and Kevin Hart doing (pretty dang good) impressions of them is inevitably funnier than them doing their usual bits would’ve been. Especially since those are beginning to wear thin anyway. In fact – and this technically constitutes a spoiler, but you really shouldn’t care – the moment everybody gets reshuffled into characters they’re more comfortable with for the third act, the movie becomes something of a slog, with the main cast reverting into the same personalities they had in the previous film and DeVito and Glover’s characters getting transported to (respectively) a severely underused Awkwafina and a horse.

But before that happens, there’s enough to enjoy. Johnson and Hart get a surprising amount of mileage out of their impressions, and the chemistry the two actors share gets put to good use, as their characters begrudgingly grow closer to each other than they’ve been in years because of their new circumstances. The way this relationship plays out is surprisingly heartfelt for a movie that rushes through pretty much all it’s other emotional beats just to get to the next action scene. Until it takes a few swerves come the third act and ends up going to some truly deranged places (think Black Mirror crossed with a bad Rick and Morty episode), that is.

Said action scenes are fine, for the most part. Returning director Jake Kasdan isn’t much of a dynamic stylist, but he’s improved his eye for staging, with a vertigo-inducing sprint over a series of mandrill-infested, constantly rotating platforms being a stand-out. He still doesn’t take much advantage of the narrative being set inside a video game, barring a few rehashed jokes involving cutscenes and a returning NPC (non-player character) played by Rhys Darby, who is supposed to guide the characters through the game.

The narrative in the game itself is also largely a wash. This time revolving around Jurgen (Rory McCann), a Viking who, of course, killed Bravestone’s parents and has now acquired a mystic jewel with the intention to do… something with it. The movie milks the joke of Eddie thinking this character actually murdered his parents for all it’s worth, but McCann barely makes more of an impression than Bobby Cannevale’s stock bad guy from the previous film. Luckily, the main cast manage to pick up his slack, never letting the film get too bogged down in its many, many plot threads. Beyond Johnson and Hart, Gillan and Black are reliable supporting players, with the latter especially having a lot of fun poking fun at himself as an annoyed black teen in a white man’s body.

So while Jumanji: The Next Level never coalesces into something more than the sum of its parts, it’s a fun enough diversion while its – somewhat overdone – 123 minute runtime lasts. With the game cast always keeping things watchable and some fun twists keeping it from feeling 100% like a cynical rehash of the previous film. The film pretends to end on a note of finality before almost immediately launching into a mid-credits scene that leaves the door wide-open for a sequel, so it’s probably a safe bet that whatever the next Star Wars is going to be is also going to have some counter-programming.

Meet the New GHOSTBUSTERS, Same As the Old GHOSTBUSTERS Previous
6 UNDERGROUND Review: Dead To Rights Next