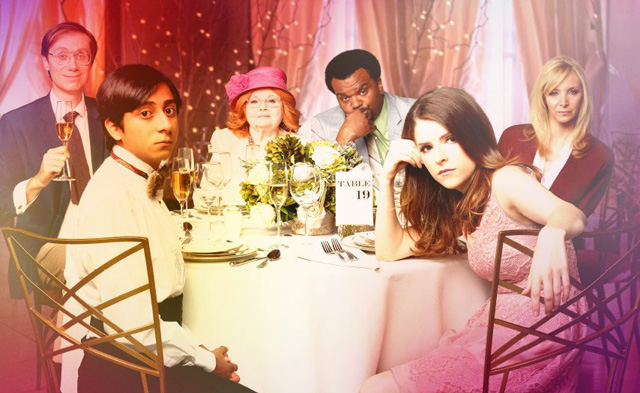 Dearly beloved, we are gathered here today in the sight of God and in the face of this company to review Table 19, Fox Searchlight’s romantic comedy starring Anna Kendrick.

Not quite dark enough to be dramatically poignant and not cute enough to be sufficiently romantic or comedic, Table 19 suffers from a distinct lack of identity. The tone of the film is all over the place, with heavy topics like abortion, cancer, and infidelity interspersed with jokes about large or tattooed penises. This varied tone isn’t necessarily a bad thing, but director Jeffrey Blitz fails to find a balance between these polar opposite approaches. The film often times looks like a sitcom, which doesn’t help the tenor of the film mesh with the emotional gravitas of the film’s script.

This tonal imbalance leads most of the performances to feel off-kilter and at odds with each other. Anna Kendrick, as Eloise, comes out the strongest of the cast, with the Oscar nominated actress opening the film with a powerful, seemingly endless struggle with filling out her RSVP form. Likewise, June Squibb is heartfelt and sincere as Jo, providing a motherly role for Eloise as she struggles with her breakup and impending motherhood.

Less successful are the rest of the cast, who feel like they’ve been copied and pasted from other films. Stephen Merchant is his usual awkward, gangly self and spends the whole movie just doing broadly silly things. Tony Revolori is similarly forced into a broad role as a painfully uncomfortable teenager looking to meet girls. Even the great Lisa Kudrow can’t overcome the inconsistency of the characters and direction to provide more than just occasional glimpses of a great performance.

This all ignores the biggest elephant in the room – this is a film that wastes Craig Robinson, one of the funniest comedic actors in Hollywood today.  Robinson, more often than not, is the best part of whatever he is acting in, but here he could easily be replaced by any run of the mill actor and the performance wouldn’t suffer one bit. Robinson sleepwalks through the film, without once touching the comedic or dramatic levels of his performances in something like This is The End.

Most shockingly of all, the film is only 87 minutes, but its pacing makes it feel like it is much longer.  Blitz, who directed nearly a dozen episodes of The Office, often spends time relishing in uncomfortable scenes for our characters. Unfortunately, this often times fails to work as cringe-inducing comedy and instead merely leads to a series of unpleasant exchanges between characters.

Table 19 is a film at war with itself. It can’t decide if it wants to be a black comedy or a lighter affair, never satisfyingly reaching either mark. The film sits in a weird middle ground that leaves the film in a state of just merely existing, provoking no emotions from the viewer.

Does It Look Like It's Our First Time? Revisiting DR.... Previous
Review: KONG: SKULL ISLAND Next