Stream of Consciousness: UNDER THE SHADOW 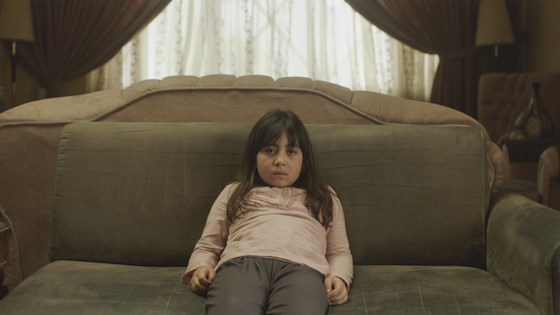 Batak Anvari’s wildly original (at least to these Western eyes) supernatural thriller is as effective a wartime allegory as I’ve seen. Certainly in the horror genre, although honestly genre-typing is increasingly frustrating, particularly when so many superb works are widely ignored thanks to the tag.

War of the Cities

The film is set in a middle-income apartment complex in late 1980s Tehran in the first days of the “War of the Cities,” just as Iraq has begun to lob missiles at the city. The apartment is, to borrow the modern term, a safe space for young mother Shideh (Narges Rashid), an advanced medical student, and her daughter Dorsa (Avin Manshadi). Shideh’s husband, a seemingly decent sort but who is afflicted by insidious misogyny and gas lighting, is deployed to a violent front. Before he prepares to leave, Shideh learns that she will never be able to return to medical school thanks, essentially, to embedded social expectations of a woman. She participated in anti-war protest during younger years, an unforgivable breech of propriety in the eyes of the university’s admissions officer. Her husband echoes the immovable judgment of the patriarchy, asserting that she is better off at home with their child as opposed to choosing her own path in life.

Missiles begin to rock the city. Their safe space begins to crack as their building crumbles. When they attempt to leave, cultural toxicity forces them back home for Shideh’s unthinkable crime of leaving her head exposed in public. In a war zone, this is what matters most to her nation’s power structure. As their home collapses, in the heart of this escalating storm, this thoroughly modern woman who is free of superstition and extremist religious pretense and this family whose only need is to escape to someplace free of violence become the target of a powerful supernatural being that preys on human vulnerability. A saggy crack in their ceiling becomes a portal to the apartment above them, which has transformed into the domain of a Djinn. DJinns are known to most of us here from silly Genie-in-a-Bottle tales and weird tattooedd creatures on cheap television shows (consider The Magicians and Supernatural). The Djinn in this film is a legitimately terrifying response to and manifestation of fear. Its power resides in artifacts most closely associated with the leads’ emotional triggers, to borrow another modern term. For Dorsa, this is a doll that she associates with home and family. For Shideh, this is a medical textbook that represents her dream career, a dream that men have forced her to abandon.

Fear comes alive, and there is no escaping it. Perhaps the film is ultimately about PTSD, about living and surviving the moments that will forever haunt us, about the wounds that will never heal. The Djinn’s motivations are never clear, and I’m not sure they need to be. It exists because Shideh and Dorsa have brought it to life, and because it embodies their fears. Allegory doesn’t justify itself in such ways. You don’t ask a fox in Zootopia why it’s fox.

I haven’t commented on the film’s craft, unusually for me, because its craft is transparent. Visually, it is nearly flawless. The apartment and the basement in which Shideh and Dorsa spend most of the film are effectively claustrophobic, even while familiar objects and the warmth of a well-used home radiate love and safety. These performances are consistently believable and moving. There is very little incidental music, a recent trend in horror film – or, at least, horror film with no interest in nostalgia. No arpeggiated synthesizers here. (To be clear, I adore arpeggiated synthesizers.)

Under the Shadow is a deeply disheartening film that is concurrently thrilling. The notion that life ultimately is a series of horrific events is pervasive in the genre, and the elevation of such nihilist themes to the independent film elite is strangely heartening to me. I’m not interested in easy answers, or even answers at all. This film offers none.

The Essence of Camp, Episode 44: REIGN OF FIRE Previous
Stream of Consciousness: SPA NIGHT Next