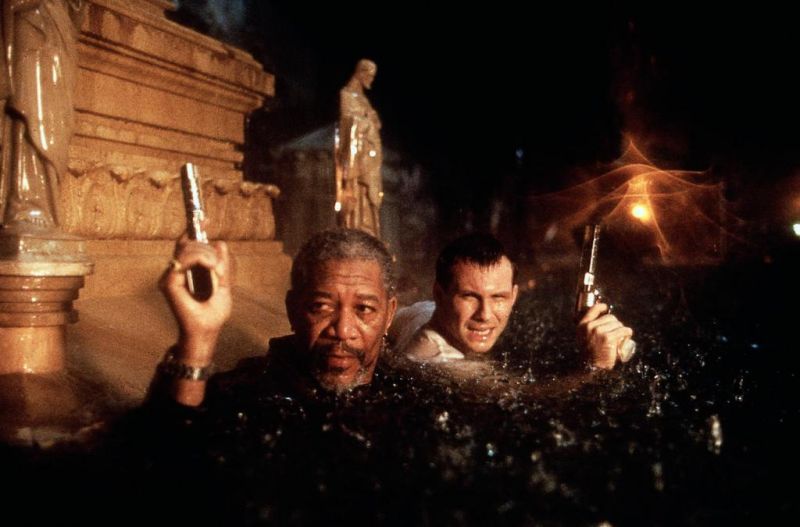 Netflix, Amazon Prime, HBOGO, and various other streaming services have revolutionized the way we consume movies and television, and each week we’ll highlight the best these services have to offer in this segment: Stream of Consciousness. This week Andrew is stepping in to champion a film he just discovered and enjoyed the holy heck out of.

A John Woo-tinged action thriller directed by Mikael Salomon and written by Speed‘s Graham Yost, Hard Rain is about armored truck driver Christian Slater facing off with bank robber Morgan Freeman during a downpour that threatens to flood the nearby town. After Freeman tries to take down Slater’s truck and gunfire is exchanged, costing the life of Slater’s coworker and uncle, Slater is forced to flee with the money and evade Freeman and his crew of thieves through the drowning town. Meanwhile, both men have to contend with the local Sheriff, played by a fantastic and merciless Randy Quad. Minnie Driver is present as an extremely capable local who ends up helping Slater make it through the town, and Betty White shows up to provide comic relief as a stubborn townsperson who refused to leave. There’s also great turns by a stable of venerable actors like Ed Asner, Wayne Duvall, and Richard Dysart.

If that all sounds remarkably straight forward, it’s because it is. Hard Rain is a movie that is putting on no airs. It starts off the way the best simple action movies do, establishing the players in quick, character-informing scenes, by which time the plot has already been under way before the movie even began. I knew I was in good hands as soon as Salomon pulled a fade-out from the Paramount logo into the titular hard rain, with everything that was about to happen already set up and ready to go. With only the slightest bit of backstory supplied along the way, and none of it overwritten or indulged in, the story is as sharply as it is cleverly written.

When you have a simple plot, everything else you put on top of that is the icing on the cake. And Hard Rain has some great icing. Whether it is Morgan Freeman’s band of misfit but unique thieves (Dann Florek stands out as an ex-science teacher who got fired for apparently teaching his kids a little too much about explosives) or the easy banter between Slater and Driver, there’s a lot to enjoy. All the characters have their own lives and moments to shine, even if it’s only with a handful of lines. Plus Freeman is having a ball here, not sleeping through the scenes but not chewing it up, either, and Slater provides a great alternative to a typical leading man with his demeanor and performance.

The action scenes are also fantastic. The great Peter Menzies Jr.’s cinematography is always electric and clear cut, and he makes sure the geography is always clean with the fights never feel rushed or confused. There’s so much John Woo going on in this movie (he was originally slated to direct) that there’s even an enormous gun fight set inside of a church, doves and all. Just like a good Woo movie, Hard Rain also has a flagrant disregard for how many bullets a gun can hold. I swear at one point Slater fires 12 bullets out of a .44 magnum (which he is also able to do one handed!). It’s fantastic. The way the movie builds each unique action scene means that it going from a quiet stand-off across a flooded street, to a jet ski chase inside of a school, to a boat leaping over a house to truckstick someone with a boat engine makes complete sense and creates a great arc of larger and larger action. Every set piece has a different problem at it’s core and a different solution, despite them all circling around the objective of getting away from the thieves or the cops, or surviving the flood for just another few minutes.

Listen, it’s quite frankly difficult to wax on about this movie too much. It’s not made for deep dives or lengthy essays. It’s just a kick-ass flick with so much to enjoy. When Slater and Freeman go from enemies to allies in the course of a matter of moments and end up back to back in a flooded cemetery, shooting over each other’s shoulders and trading a quip or two, I’m reminded why I love movies so much. I cannot recommend it enough to action movie enthusiasts or anyone who needs a film that will fill them with delight.

I’m a simple man when it comes to movies. Give me well-choreographed action with a straight forward yarn and I’m yours. Few enough movies seem to rely on the specificity and simplicity that their visual medium allows for, but more than any number of movies I’ve seen lately, 1998’s Hard Rain does so with gusto. All that, plus it has Betty White threatening people with bear traps and a shotgun. And what more, I beg, could you ask for?

Hard Rain is currently available to stream for Amazon Prime users. Be sure to check out our Stream of Consciousness from earlier in the week, where Kevin dived into a bevy of great titles streaming this month.