Not quite great, but still a fun time 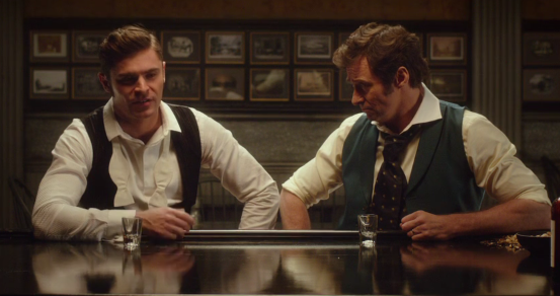 I’ll be honest: I had no idea what to expect when going into The Greatest Showman. I hadn’t really seen any previews, had heard none of the songs, and knew next to nothing about it other than it starred Hugh Jackman and was about P.T. Barnum. But once I had heard that the lyricists behind La La Land and Alex Lacamoire (music director for In the Heights, Hamilton, and Dear Evan Hansen) were involved I was immediately intrigued. In a way, not knowing anything about the show I was about to see was kind of appropriate. Like the customers in Greatest Showman I was about to see a show of infinite possibilities. Fortunately, it paid off, for the most part.

Greatest Showman looks at P.T. Barnum (played by the ever so talented and oh dear God why can’t I sing like him, Hugh Jackman) as he begins his world-famous circus and the controversy that came with it. Like any typical “biopic” (I use that term loosely here) it’s equal parts entertaining, informative, and exaggerated. However, there are important elements of our main character’s life that are left out of the final film, such as Barnum’s history of racism. Now, from a studio and filmmaking standpoint it would make sense to leave it out. After all, this is supposed to be a fun time, just a simple musical that will have you tapping your feet and humming after the credits have rolled, so you can’t very well have your main character enslaving a woman and putting her on display (see the story of Barnum and Joice Heth) and then later selling tickets so people could watch her autopsy. However, with race playing a role (specifically the relationship between Philip Carlye and Anne Wheeler, played by Zac Efron and Zendaya respectively) in this movie it seems like a wasted opportunity to flesh out the character of Barnum who for the most part is presented as just this happy-go-lucky showman instead of the racist con artist he was. Now I am aware that doing this would dramatically change the tone of the movie, but I feel they could have at least included a moment of self-reflection. It just feels like a missed opportunity.

Now despite this rather glaring flaw with the film I quite enjoyed it overall. The acting is superb; though those playing the attractions don’t nearly get enough development outside of Lettie Lutz (played by Keala Settle) who even then doesn’t get that much, or at least enough. The cinematography and direction really help to capture the frantic nature of a circus.  The whole film, especially the rooftop scene near the beginning feels a lot like a Baz Luhrmann film, specifically Moulin Rouge. Perhaps it’s the frantic pacing during some scenes, or it’s simply the setting, or maybe it’s a combination. To me though, it’s due to the music. Greatest Showman did something rather brave that I must give it credit for; it got away from the more traditional, operatic style of musicals and went with a pop/rock feel. It was less Sound of Music and more top 40. Given the less than stellar history of recent musicals (Rent, Rock of Ages, etc.) that got away from the traditional formula (with the exception of La La Land and Sing Street) this was a rather brave move on the part of the filmmakers and composers. From what I understand the reasoning behind this was to sort of represent the idea that Barnum was ahead of his time by having music that was ahead of its time. The music in this contains elements of mostly everything, a little rock here, a little pop there, and even some nice folk thrown in for good measure. The blending of these different elements and the risk that the filmmakers took musically is easily the best part of the film. The performances from Jackman, Efron, Zendaya, and Settle are all fantastic, it’s nice to see that Efron has evolved past his High School Musical days. Regarding Jackman, it’s so refreshing to have a bass/baritone as the star of the production instead of the typical tenor that most musicals have.

From a story perspective it’s honestly rather forgettable. That’s not to say it wasn’t done well, it very much was. But there’s nothing about the story that sticks with you and forces you to think about it like a truly great movie does. I know that it probably sounds like I really don’t like this movie but on the contrary. Despite its glaring flaws, it’s forgettable story, and its unwillingness to tackle issues that could have added a lot to the overall plot, I actually really loved this movie. The music, the performances, and the overall cinematography are all fantastic and work amazingly well together.  It’s not going to go down as some sort of all time great, but it’s definitely a great way to spend an hour and a half. It’s not quite the greatest show but it’s damn close.

JUMANJI: WELCOME TO THE JUNGLE Review Previous
A Ghost Story for Christmas: THE LEGEND OF HELL HOUSE Next