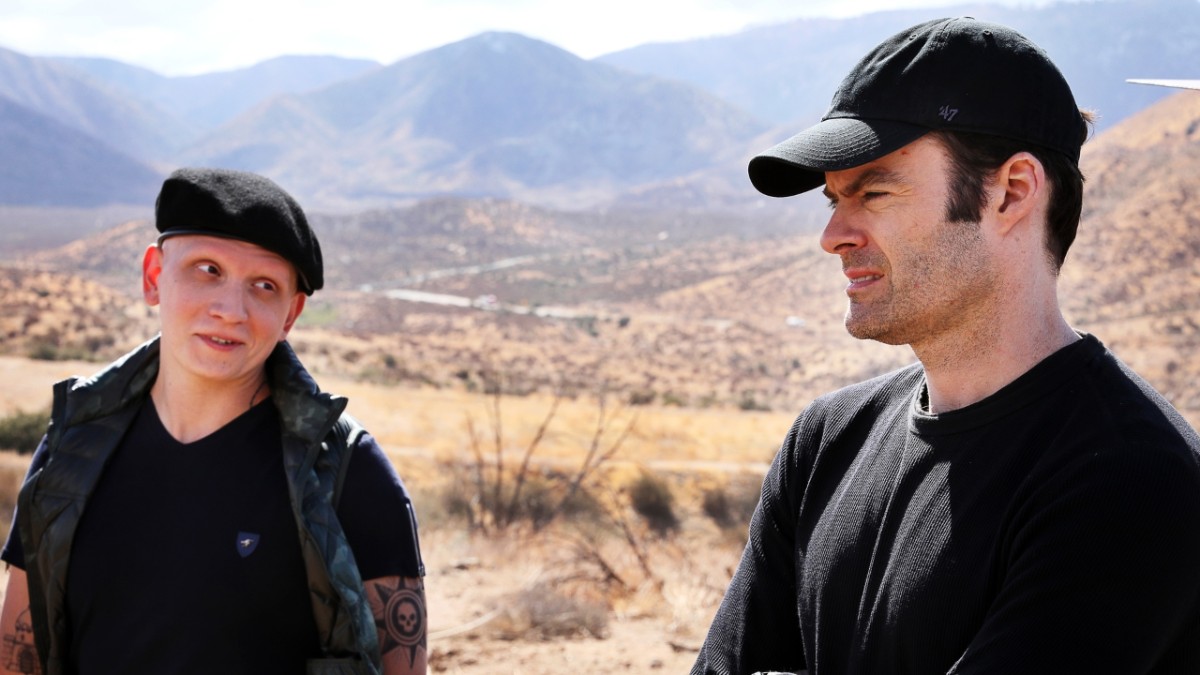 It’s Andrew stepping in to help Diane, here reviewing Barry’s increasingly dark second season. In its sophomore year Barry hasn’t shelved the comedy, but it has upped the darkness making the comedy take on an even more morbid edge. The third episode of season 2, “Past Equals Present x Future Over Yesterday,” has taken the old formula for comedy, that of comedy = tragedy + time, and really leaned into the concept. In doing so, the series has become less a fish-out-of-water story about a hitman-turned-actor and become one where we have gotten into the head of Barry and what really makes the guy tick. What we find there is the void he hears whenever he reflects on his time in Afghanistan: just a hot wind blowing across a sere plain.

Barry, a man who is, the longer we watch him, seemingly trying to take an acting class so he can convince himself he’s really not a violent person and wants to put his past behind him, is put off by having to relive his combat history in Afghanistan for Gene Cousineau’s acting class. Especially since instead of the gut-sick feeling his fellow actors assumed he felt getting his first kills, he and his buddies actually laughed and cheered at every target he picked off. He doesn’t want to play it, not only because he knows it’s a lie, but because he’s trying to, above all else, convince himself he’s moved on.

Trying to write a version of his scene with Sally also trying to write hers about her abusive ex in his room, Barry can’t get a handle on what he wants to say. And he can’t let out the darkness that everybody in his life keeps telling him to unleash. Eventually Sally leaves the room and bullets start pocking the walls of Barry’s room; he realizes he’s being shot at and gets the drop on NoHo Hank and a Chechen hitman on a roof across the way trying, badly, to snipe him for his failure to deal with Esther in the monastery. This moment perfectly illustrates the lies Barry is telling himself. He’s not particularly upset that if Sally had stayed a bit longer a stray bullet could have easily ended her, and he doesn’t wind up killing Hank for what he did, but instead makes him an offer to train his men to clear his debt. For two episodes now Barry hasn’t been able to bring himself to kill objectively bad people when we know he’s perfectly capable of killing people like Detective Moss for his own self-interest.

Barry tries to talk to Fuches about his issues all without realizing that Fuches is trying to nail him for the murder of Detective Moss as Detective Loach leans on him in turn. But what Barry should have known is what we saw in the first season, that Fuches was always using Barry, whether for gain or as now, a get-out-of-jail-free card. Except Barry really has no one to turn to, and so he tries to make do discussing his past war experiences with a man who can’t help because he never cared about Barry in the first place as anything other than a tool to make money. It’s easy to see why Barry keeps coming back, though—in a very real way Fuches is the only person who knows Barry’s past, and he doesn’t care.

Barry ends up trying and failing to use a war speech from Braveheart in his scene (getting called out by the class and Gene in particular who intrudes on his dream reverie, directing Barry while Barry actually stands in his mind in a village in Afghanistan) before failing in his scene with Sally as well—though, to be fair, this is as much because of her own avoidance of her truth as his avoidance of his. At the end of the episode, when Sally is trying to talk to Barry about his struggles getting to where he needs to be emotionally for his scene with her, her ex-husband, Sam, arrives. Barry stares at Sam, and as we close in on his eyes, we hear that lonely, hot Afghani wind pick up again: Barry is emotionally home.