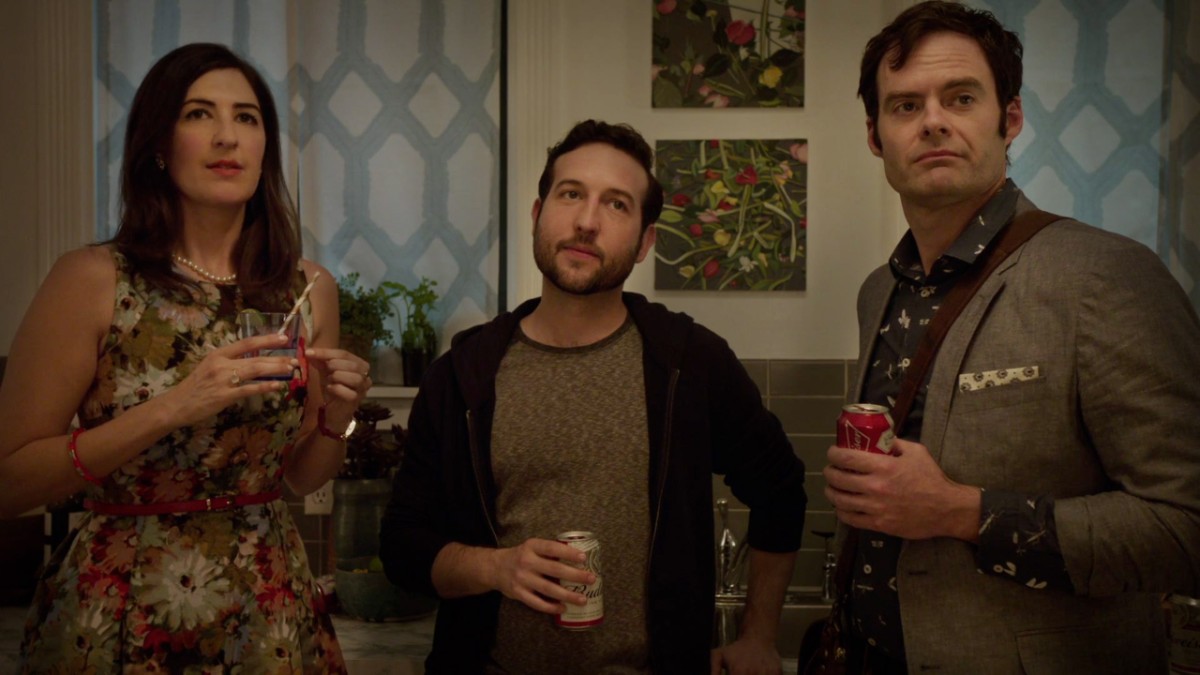 In this week’s episode of Barry, “Commit to..YOU,” shit got real. Fuches tells Barry about the raid on the Bolivian stash house, Barry gets himself into relationship trouble when he tries to help Sally, Sally is cool and detached post-sexual encounter, Gene wines and dines Detective Moss, and the investigation heats up as Moss finally cracks the dashcam video. Onward!

Last week, I pointed out how the episode’s title alluded the theme of the episode. In this episode, everyone is moorless and trying constantly to commit to a version of themselves that doesn’t exist. Barry tries on a new outfit (literally plucked from a mannequin at J. Crew) and tries to play boyfriend even though he isn’t really Sally’s boyfriend and doesn’t know how to be one anyway. Sally’s attempt to be a serious actor hits the worst of obstacles, sexism and harassment. Gene tries to romance Detective Moss, impressing her with a classy restaurant, but we know his grace at the dinner table comes from a guy who has only managed to eke out a living by being an outsider to his own industry.

It’s a thematic area that I found resonant. We all go through life shedding and adding bits and pieces of personality based on what we feel, what is going on in our lives, who we are around, and what is necessary to survive. We try on different clothes and hairstyles and we change ourselves just a little for that attractive person we like or that job we want. It’s not necessarily bad, it’s just that in the case of Barry, everyone is so emotionally stunted they don’t even know what authenticity looks like.

Gene is an elderly acting coach who embodies the motto of “if you can’t do, teach.” Yet he still tries to “do” – he still auditions for roles like “Man in Back of the Line” and both he and the casting director knows he’s not likely to get it. He still books a table at a nice restaurant to woo Detective Moss with information about Ryan’s death and convince her to have dinner with him. It’s all fake. The restaurant is real, but Gene “knows” Judd Hirsch in the same way he “knows” Patrick Swayze – he’s a footnote in their lives, like he’s a footnote in Hollywood. But he tries so hard and seems to revel in being able to impress someone, anyone, that you want to believe he can get his break, even as his best years seem behind him. Henry Winkler puts in such good work in this episode, and Paula Newsome is charming as hell as Detective Moss. She gets some of the episode’s best laughs, including her reaction when she googles Gene and finds out that he knows Judd Hirsch. She and Winkler have a playfulness at the dinner table that really lets both actors shine.

Sally is narcissistic and needy, and this episode picks up the thread established in episode 3 by showing us why. She goes through the ringer in this episode. Mike, the guy sending her on auditions but won’t commit to being her agent makes it clear that either she’s going to have sex with him or he won’t be her agent. When she rejects him, asking that they keep their relationship professional, he wrecks her audition. For Sally, this almost seems worse than being issued a horrifying ultimatum. It’s a cruel scene, and while at first it looks like cruelty for cruelty sake I think the show uses it deftly to garner sympathy for Sally.

It explains a lot about Sally’s life to date. It explains why she’s in Gene’s class, why she’s so cool to Barry the morning after sex, and why the audience may be tempted to believe she’s a terrible person….and they wouldn’t be wrong. She’s a miserable person, and that misery permeates everything around her. Sally’s career has been one humiliation after another, and as a result she’s developed unhealthy coping mechanisms that are clearly about using sex to distract herself. It’s just that Barry’s emotions are running on Safe Mode right now so he’s unable to see her as she is.

Meanwhile, her narcissism means she’s too oblivious to know how brushing off Barry makes him feel, but she’s also clearly engaging in the kind of behavior that she recognizes other people using against her. I feel awful for both Sally and Barry. Her misery predates Barry and he’s neither the cause nor the solution. I want Sally to get better for Sally’s sake, not Barry’s, but I also want her to stop hurting him. It’s sort of like kicking a puppy.

Barry’s identity problem isn’t that he’s wearing a mannequin’s outfit, it’s that he thinks that appearances are all he needs to make him someone else. As Gene tells him in class during his Glengarry Glen Ross reading, he’s too deferential to other characters. He’s not giving himself any room to dominate in a scene when his character needs to. Barry tries this lesson by confronting Fuches with a hilarious rant about not wanting to raid the stash house, but it all just blows up in his face when Fuches follows him to a party full of his classmates. This episode also gives us another daydream in which Barry and Sally are engaged and they have a big house with five guest rooms. Barry’s best friend is Jon Hamm (who makes a hilarious cameo). The outfit, the daydream, and the big red bow on the laptop he’s bought for Sally are reflections of what Barry wants, completely unrooted in any semblance of reality.

So when Barry presents the new laptop, it’s clear that he’s trying to will his daydream into existence. It’s just not how the world works. He can’t hold onto Sally because he never had her to begin with. He’s trying to fix one tiny thing in a world where he is largely ineffective. He can’t help Sally get jobs, and because he’s a hitman, all he does is leave behind broken lives.

Even when Barry is around his old Marine buddy, who he’s invited to the party, it feels like he’s doing exactly what Gene accuses him of doing during class. He’s deferential to everyone but himself. This version of Barry comes off as a lunkhead just because he molded himself to the environment he and his Marine pals created. This is especially the case when that old friend brings two walking examples of toxic masculinity, and they encourage him to stake his territory with Sally, who is flirting with Zach, a guest whose claim to mild fame is mo-capping Pinocchio. Barry’s confrontation with Zach doesn’t read as terrifying, not like when he threatened the Chechens. He sounds like a high schooler challenging a kid to a fight in the courtyard on a dare. Barry’s still pretending because the real Barry, the one who knows how to threaten people, can’t be seen in public.

Meanwhile, the truthful things he presents puts him in danger. Is it prudent for everyone in class to know he’s a former Marine? It’s not uncommon but it’s certainly unusual when one of them just got murdered. Then, when he leaves Natalie’s party he pulls out a big wad of cash, tipping off one of the musclehead Marines who came to the party that Barry isn’t really in auto parts sales. Oh and Detective Moss finally has NoHo Hank’s dashcam video of a fuzzy and unidentifiable Barry shooting the Chechens! Great.

Barry is getting sloppy. His attempts to commit to himself, as the episode lesson suggests, have been haphazard, and it’s causing problems. He needs to get his head back in the game before it results in someone getting killed.

We are halfway through the season. Have you heard the good news? HBO renewed Barry, which means we’ll be getting more of this amazing show!

The music cue when Fuches shows up at Natalie’s party is haunting. My gasp matched Barry’s face.

“You aren’t gonna tell these people who you really are, right?” Stephen Root puts a chill down my spine while snacking on finger foods.

I like the callback to the fact that Barry and Fuches are from Ohio and only brought a week’s worth of clothing with them to LA. In this episode, Barry is wearing the same blue-gray shirt he’s wearing in episode 2.

Jon Hamm. That is all.

Sarah Solemani, who wrote this episode, gives Bill Hader the best scene of the episode, where Barry walks up to Fuches at a driving range and starts yelling at Fuches about using him. “Take out a stash house? Oh just have Barry do it, he’s fucking Jason Bourne!”

There Was An Idea… Lovecraft and Strange: Embracing... Previous
Review: YOU WERE NEVER REALLY HERE Next