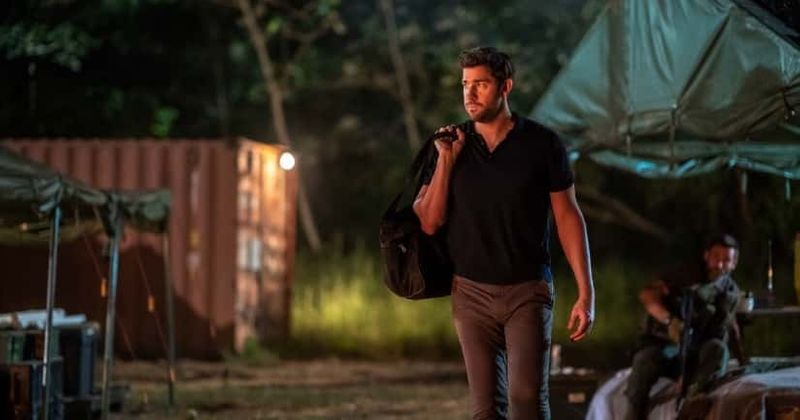 With the second episode of Jack Ryan season two, “Tertia Optio,” we find ourselves in the midst of a conspiracy that is already in full swing. After an explosive conclusion to episode one in which Jack’s mentor and friend, Senator Jimmy Moreno, is murdered by a mysterious blue eyed assassin with unknown backers, Jack is on the warpath, and with enough support behind him to actually do something.

Perhaps the most notable aspect of this episode is that it chooses to not ease off the gas for even one second from the previous episode. While it isn’t full of explosions and death, the pacing is turned up to 11 as we witness all of the parties on every side scramble for information and control. While Jack and Greer work with the Venezuela CIA Chief of Station Mike November to interrogate the Venezuelan National Police captain who unknowingly helped set up the assassination, President Reyes and his men rapidly go to work to find scapegoats for the assassination in hopes of ending any serious US investigation before it begins.

Jack, on an unsanctioned covert op gone awry, links up again with the femme fatale that we will soon come to know as Harriet Baumann, with whom he had a romantic encounter in episode one. When it turns out that she is in fact an intelligence officer working a case of her own, they pool resources to try and put Reyes and the people working for him back on their heels, hoping that in their panic they might slip up and reveal more information. It’s the kind of move-counter-move spycraft that is at the very heart of some of Clancy’s best work, and it’s thrilling to see it play out on television. Watching the characters use their brains to formulate aggressive gambits in attempts to out-maneuver their enemies is why Clancy fans kept reading his books year after year, and the deftness with which the show depicts it is one of its greatest strengths.

This being a Clancy adaptation of course, it’s never quite as easy as “the good guy does something smart and crisis is averted and the day is saved.” Rather, what we see is Ryan’s aggressive maneuvering inspiring his foes to become more aggressive in turn, which culminates in a near fatal showdown between Jack and this mysterious assassin. By the time the episode ends, we know who he is, but we still don’t know what he, or the people that hired him, want, and that is set to become the driving force behind the rest of the season.

Meanwhile we also witness a small degree of table setting, as Greer and November pull the necessary strings to assemble a covert operations team that they hope to use to further investigate the activity occurring in the jungle and along the waterways of Venezuela. The primary viewpoint of this is a former sailor named Marcus Bishop, who upon returning home from his day job of doing boat repairs discovers that he has been paid a visit by every Jack Ryan fan’s favorite shady covert military guy Matice. Matice has been assigned the job of assembling the team for Greer’s op and is convinced that Bishop is the best possible choice to drive the boat. The push and pull of personalities on display here is intriguing and it bodes well for what is to come, as Matice’s general sense of ease with this world clashes with Bishop’s desire to get as far away from the military as possible. Also, you know, more Matice is always a good thing.

Two episodes in, it’s clear that Jack Ryan season 2 is a worthy successor to the breakout first season. The deft plotting, brilliantly sketched characters, stunning action, and smart takes on modern geo-political issues are all back in full force, and the threads that have been set up carry with them the promise of a truly thrilling second outing for John Krasinski as the classic Clancy character.