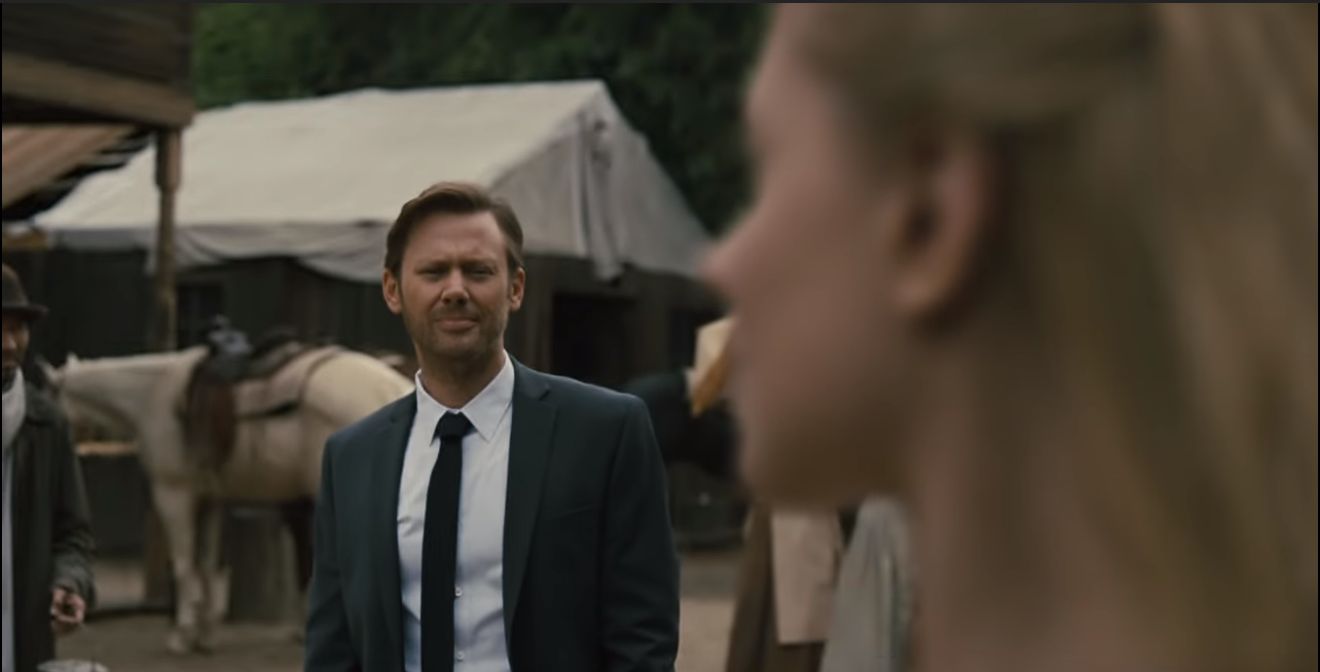 How was Westworld born? The show still hasn’t given us the specific genesis of that idea, the moment when Robert Ford and his partner Arnold first sparked life into their future robot victims, but tonight’s episode fills in the blanks regarding the financing of the park and how William came to be more deeply involved with it. Jimmi Simpson returns as Young William while Ed Harris still does duty as Old.

The episode opens with Dolores in what appears to be the real world, a just-the-other-side-of-now unspecified future. Kitted up in high heels and a little black dress, she looks ready for a night on the town, but she still speaks in her homey patois as Arnold (or is it Bernard? It doesn’t really matter) speaks to her and she relates how she sees all the dazzling lights of the big city skyscrapers outside the window. They go for a walk, Arnold touring her through the foundations of the Frank Lloyd Wright-style mansion he’s building, and he tells her he doesn’t know if the world is fit for people any more.

The next time we check in on the prehistory of the park, Young William is with his soon-to-be brother in law, Logan. He gets up, leaving Logan to glad-hand when Logan is visited by two members of Delos who try to get him to invest in what they are doing. He balks at first, protesting that every AI, VR, and AR startup wants his funding and that they’d better impress him. They take him to a party where he thinks the game is to guess the robot. When the entire party freezes, he’s more than impressed. He’s all in.

The third time we check in is sometime after William’s first visit. He makes the case to Logan’s father, who isn’t impressed by the fakery of the park they’re touring no matter how much sex and death it entails, that what the park provides is a way to spy on the guests. Guests whom, on the outside, do business with them. The idea is persuasive enough to get the old man aboard and, further, make him name William as his successor.

The last time we see them outside the park, Logan’s father is having a retirement party. He tells William it feels more like a coronation, but William says he enjoys the arrangement, with the old fellow as the face and him as the dealmaker. The old man’s cough punctuates his ominous statements that time just isn’t on his side. Meanwhile, the party, which has hosts mingling as entertainment for the guests, leaves Dolores wandering the grounds and heading outside to see the city she once looked upon with Arnold, now from across the bay. While she stares intently, Logan, drinking himself into a stupor, tells her that humanity has doomed itself.

Back in the present (if there is such a thing in Westworld), Post-Post the Ford Incident, we follow Dolores and Old William going about their journeys. The show hits a narrative snag by focusing on these two characters. Bernard, the most human of the robots, is an easy identifying point for the audience. It’s compelling to see him navigate between what he thought he was versus what he now knows himself to be. Likewise, Maeve, the most self-aware of the former park cast is working her way toward finding her daughter as, for her, it’s a memory, created by a scenario writer or not. Someone self-actualizing is compelling to watch. Dolores and Old William, on the other hand, are cyphers.

Dolores may not be the farm girl she once was, but she’s only got freedom within the confines of this new game Ford shifted the park into. She understands that it’s all a game, but she only understands in the context of what Ford has allowed her to understand. William is a cypher because, for all we know of him, we still know very little. He started out idealistic, came to Westworld, and ended up as a grizzled, weather beaten old gunslinger clad all in black like a frontier version of the Grim Reaper. It’s not particularly compelling for a villain’s origin story, nor very well fleshed out as the time gap between Young William and Old William is a gulf of unremarked upon years.

Further, their quests are mysterious. Dolores and William both want to travel places, her to a valley, him to where he can burn it all down (guess he rejects the Charlie Bucket version of a happy ending: give him everything he ever wanted and he hates it). But to get there, it’s more obscurity. She wants to build an army of Confederados and he tries to recruit from the bandits of Pariah. She succeeds in killing her group then making a kidnapped Westworld refurbisher bring them back on line. When William takes the bandit leader of Pariah, played in a cameo by Giancarlo Esposito, hostage, the leader first tells him Ford wants him to go it alone before blowing his own head off. The gang follows suit.

Dolores later reveals to Teddy that the place she wants to go isn’t a place—it’s a weapon. Her declaration lands with a dull thud, just like the twist that Ford is still in control of what William is doing does. Neither are particularly compelling as characters and both of them going on obscure journeys with mysterious goals in mind is narrative death. Even the hint (reinforced by intertwining their two stories in the editing) that her weapon and his valley are the same place, there’s little to drive interest in the goings on. Two episodes in and so far the show has gone nowhere fast. Even if this is all place setting, it’s overlong, dull place setting. Or, as the hosts of Westworld are fond of saying, “It doesn’t look like anything to me.”