The CRAZY RICH ASIANS Trailer Is Gleeful And Gorgeous 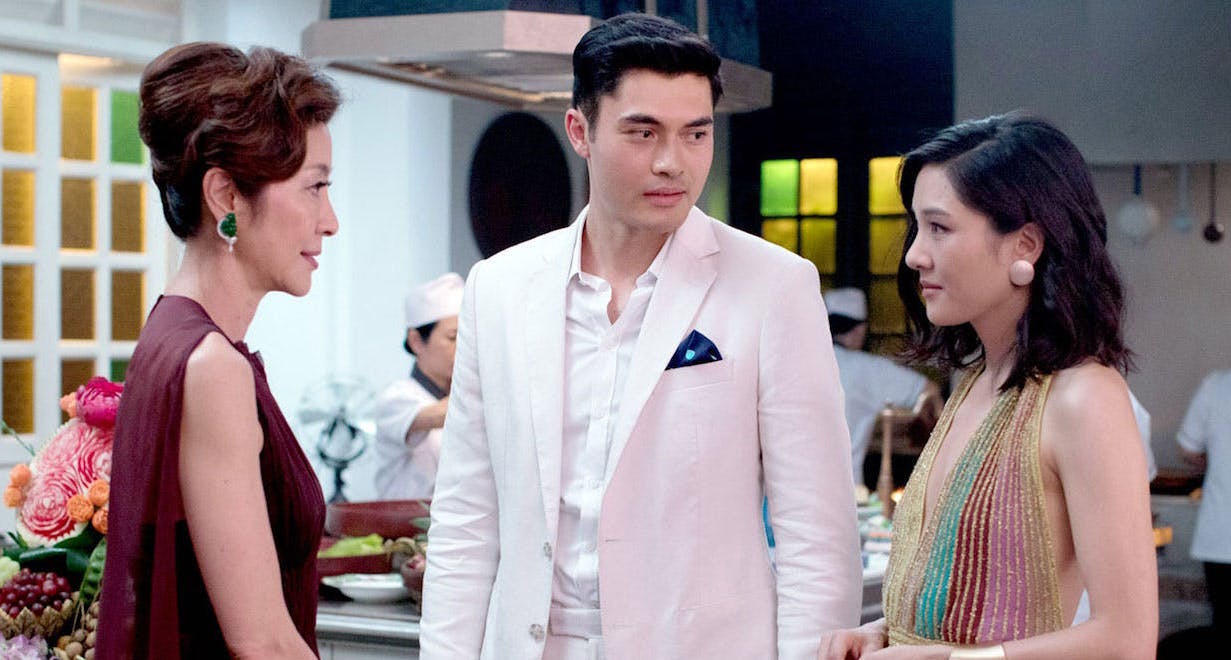 Crazy Rich Asians is pretty much what you imagine it sounds like – it’s a breezy summer rom-com full of glitz and beautiful people. Oh my, is this movie glitzy. Constance Wu plays Rachel, an economics professor who ventures way out of her comfort zone to meet her boyfriend’s family – in Singapore…oh, and he forgot to mention that he’s one of the richest people in the country and one of its most eligible bachelors. Whoops.

This movie has a stacked cast. Besides Wu, who is a comedic powerhouse (seriously, check out Fresh Off the Boat), and Michelle Yeoh, it also features Awkwafina (having a big summer between this and Ocean’s 8) and Ken Jeong (Community).

Director John M. Chu has adapted Kevin Kwan’s book of the same name, using a classic rom-com foundation that has previously been mostly open to white actors, and I am here for it. Not only is Rachel a fish out of water, but it represents a cultural homecoming for lots of us who are a result of diaspora.

Yes, it stars a majority (all?) Asian cast, and let’s not pretend that’s typical. So often, I read that a movie “happens” to have people of color – well, okay. I get what that means. One day, when we have what white people get all the time in their movie genres, Hollywood won’t be trying to promote movies based on the fact that people of color “just like us” and their story is universal. You know why? Cause it is and they are and no one has ever pointed to a Ryan Reynolds movie and gone, “I hope audiences can see themselves in this.”

This is why I planned a parade for August 18 and I’m going to be pushing for my family, friends, and everyone I know to see this movie.

Even though the movie isn’t out until August 18, there has been a surprise screening and loads of hype. These reactions and this support matters:

Going to bed full of mochi and happiness remembering making dumplings with my grandparents and extended family and never feeling fully at home on either continent, grateful to @jonmchu for capturing this feeling so beautifully. #CrazyRichAsians

When is the last time you saw two Asian romantic leads on the poster for a major Hollywood motion picture? #CrazyRichAsians pic.twitter.com/WqvAdjQB4W

Saw #CrazyRichAsians. It was hilarious, colorful, and SUCH A GOOD ROM COM. I truly can’t tell you what it meant to see so many Asians on screen as the main characters. ALSO @awkwafina is the G.O.A.T. 🔥🎎🎏⛩🍚🍣🥟🍱

And @jonmchu takes the stage and says he just had a daughter and he wants her to be able to see her stories on a big screen like this one. 👏👏👏

#CrazyRichAsians is a love letter to Westernized Asians who live in a world that has heretofore largely ignored them.

This movie is what we’ve been waiting for. Just like how Fresh Off the Boat was the first network sitcom with an Asian cast since the 90s, I hope we keep making waves. My hope is that this is just one movie in a big, rich tapestry of Asian-led movies and television shows. Let’s get everyone in here. Let’s get more South Asian rom-com leads (remember The Big Sick? What a lovely movie). Let’s get Thai action movies. Let’s have some Cambodian dramas. Let’s bring back Selfie.

If it’s not clear how long we’ve been waiting…

You bet your sweet ass #CrazyRichAsians is historic. 🙌

Here's to the film's success and many more Asian-led projects to come. 🥂https://t.co/iYHsHhDkma

This trailer was so fun and the hype so exciting that for a moment I’ll just forget Hollywood wanted to make Rachel a white lady and all the cracks about about shark fin soup. Not today, Satan.

Review: CHAPPAQUIDDICK Previous
The VENOM Trailer is Gloriously (and Unintentionally)... Next