"In a world without gold, we might have been heroes!" 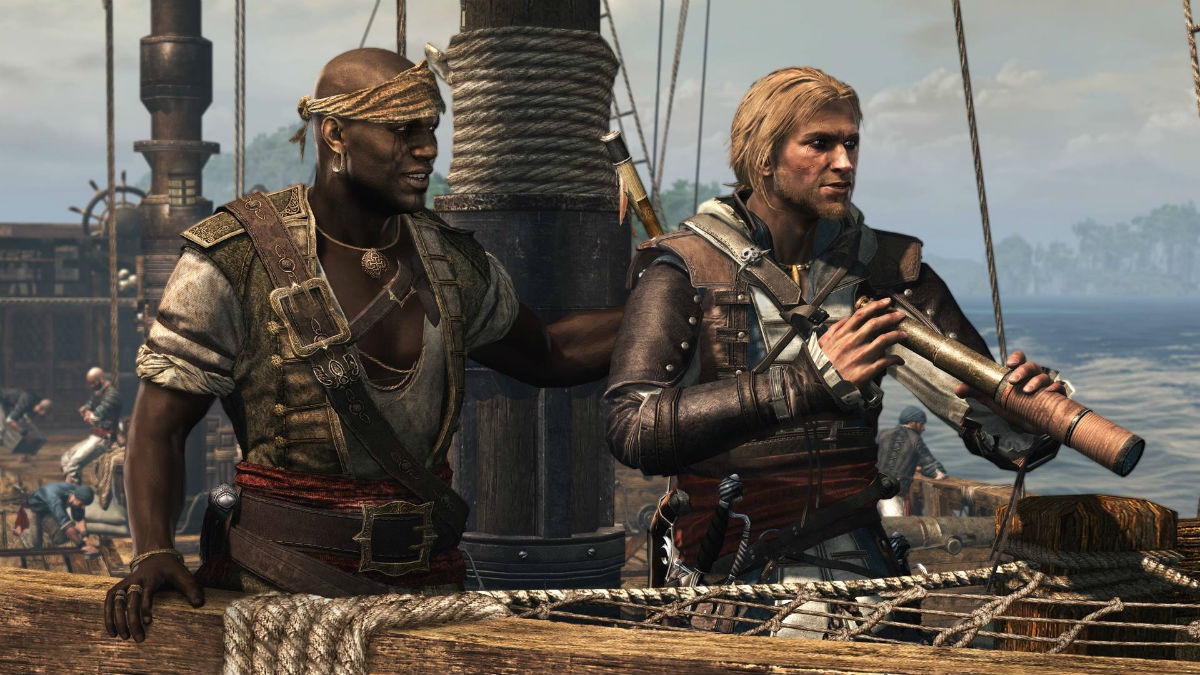 Popular culture has always associated pirates with adventure and wonder, something that conflicts me. There’s a lot of excitement to be had with ocean exploration, treasure hunting and the uncovering of supernatural legends. However, pirates are criminals by definition, and that trait is usually portrayed in a romantic fashion. Their fictional versions are dashing rogues who look for a loose life and remain apathetic to the damage they leave in their way.

The aforementioned context made the Golden Age of Piracy an exciting period for an Assassin’s Creed game, especially since the series has always found creative ways to subvert expectations about its settings. Historical accuracy is important, but it never gets in the way of creating a universe that feels grounded enough to be easily recognizable and weird enough to be intriguing.

In Assassin’s Creed III, the series introduced naval combat. It was a fresh gameplay mode that provided the players with a new side of the Assassin leadership experience and challenged them to maintain their strategic prowess under harsher than usual circumstances. Assassin’s Creed IV: Black Flag took that new mode, built on it and turned it into its backbone, both thematically and technically.

The story is centered on a Welsh sailor named Edward Kenway (the grandfather of Assassin’s Creed III’s protagonist Connor Kenway), who left his wife behind to search for a strange observatory that could potentially grant him unlimited wealth. What’s interesting about Edward’s journey is that the Assassins vs. Templars war that defines the franchise takes a back seat; but its core themes, like the cost of liberty, fanaticism and ideological disappointment are still very much present.

Edward fantasizes about creating an utopian Pirate nation in Nassau with the help of other notorious sailors, like Edward “Blackbeard” Thatch, Charles Vane and Mary Read. The main motivation was to be completely free from the responsibilities that came with being ruled by the big colonial powers of the time, i.e., England and Spain. The game succeeds in making the pirates likable enough to get your interest, but it doesn’t pull its punches when it comes to explain why their lifestyle and mindset was absolute nonsense. Their whole Nassau experiment ends up devolving into a wasteland of boredom, sickness and disorder. All because what the pirates wanted wasn’t actual freedom, but a misguided sense of happiness that’s centered on one’s own momentary pleasure instead of anything in service of personal and societal growth. Their poor management is what ultimately lead to their demise by the oppressive authorities they were desperately trying to avoid, since they didn’t have the resources to resist massive military strikes.

Edward’s charisma helps to hide the fact that he’s a self-centered jerk that doesn’t think carefully about the consequences his actions bring to other people. When he comes across the Assassins or the Templars, he’s utterly indifferent to their conflicts, even though the fate of the world is at stake. This makes him an avatar for European colonialism at the time. He’s a white man in a leadership position whose quest for resources leaves the local societies in a worse state then he found them, a fact that comes back to haunt him in a spectacular fashion throughout the course of the game; for instance, in Blackbeard’s death or in his two imprisonments.

Of course, no pirate romp would be complete without a ship at the center of the action. Edward acquires his war brig, which he names Jackdaw, right after being captured for the first time, kickstarting his path towards a life of debauchery and chaos. From a user standpoint, the Jackdaw helps us to get familiar with the world in the game and progress in it. Even the calm moments where the sailors in the brig sing and bond over their long periods in the sea add life to the landscape. They’re nice breathers to appreciate not only the people that affect and are affected by Edward’s story, but the astonishing beauty of the Caribbean Sea.

Since Edward remains a pirate for most of the story, the nautical mechanics are focused on assault. This could have turned into a rather uncomfortable experience, given the nature of pirates’ ethics (or lack thereof). But the game justifies it by letting you know that the people in charge of the ships you attack are tyrants looking to take the marine routes all for themselves. In fact, many secondary missions involve innocent sailors and traders who are being bullied by higher forces and require you to get rid of their patrolling ships. With that said, the brutality employed in these endeavors depends on the player, who can opt to eliminate the enemy ships entirely, or board them and minimize the human casualties (you can go for non-lethal close quarters combat if you like).

The Jackdaw provides Edward with adventure and wealth at the expense of the safety of his crew and himself. In the process, he would make many alliances and friendships, most prominently that of his Quartermaster Adewale, who acts as a voice of reason. Adewale has gone through a much more harsh life than Edward, and as a result, is more mature and wise. He’s a careful strategist, so he often gets impatient with Edward’s recklessness; especially when he makes decisions that cost lives. Adewale doesn’t hold himself back when he needs to make Edward see the stupidity of his ways.

Another noteworthy ally is Mary Read, who shares Edward’s ambitions, but has already learned that the life he leads is not the most healthy. Despite Edward’s toxic attributes, Mary believes he has a potential for heroism he hasn’t discovered, and she wants to guide him to it.

One of the most resonant elements of the story is that Edward’s process towards knowledge and healing happens, in good part, thanks to the Mayan Assassins, who were attacked because Edward gave away their secret location in order to gain the Templars’ trust. In many aspects, the Mayans were ahead of their time. They loved nature and appreciated the resources it provided for them, and as such, they found a way to thrive as an incredibly advanced society while respecting their environment and the fauna that lived in it. The idea of a man who has spent most of life ignoring the issues of those less fortunate than him being educated by a group of people who prioritize the Earth’s necessities over their own pleasures is a clever way of placing what made the Mayans such a sophisticated civilization as the heart of the game.

While most of the protagonists in the Assassin’s Creed lore find their calling within the Brotherhood early in their sagas, it takes an entire arc for Edward to reach that stage and become a truly heroic figure. That’s because the other protagonists are motivated by an unjust action they suffered at the hand of a corrupt power or a betrayal. What makes Edward’s journey so unique is that he is the negative influence in the equation, since the damages in the story are the fallout of his own decisions. His victims have all the reasons in the world to ostracize and attack him. And yet, they prefer to help him find a new beginning in a cause bigger than himself (i.e., the Assassins) because they know the dangers of allowing your desires and impulses to dictate your behavior. It’s only when Edward starts feeling his own heat when he notices that the promise of happiness in the pirate way of life is a conscience-numbing fallacy.

The beauty of Assassin’s Creed IV: Black Flag is that it takes the swashbuckling tropes we associate with pirate adventures and uses them to shed a light on their negative influence in history without ever sacrificing fun. Edward’s journey is filled with dark and poignant moments, since it’s about having the courage to recognize your own destructive deeds and working to make up for them — but also about finding hope in the devotion to an ideal and a community that acts as a positive agent of change.