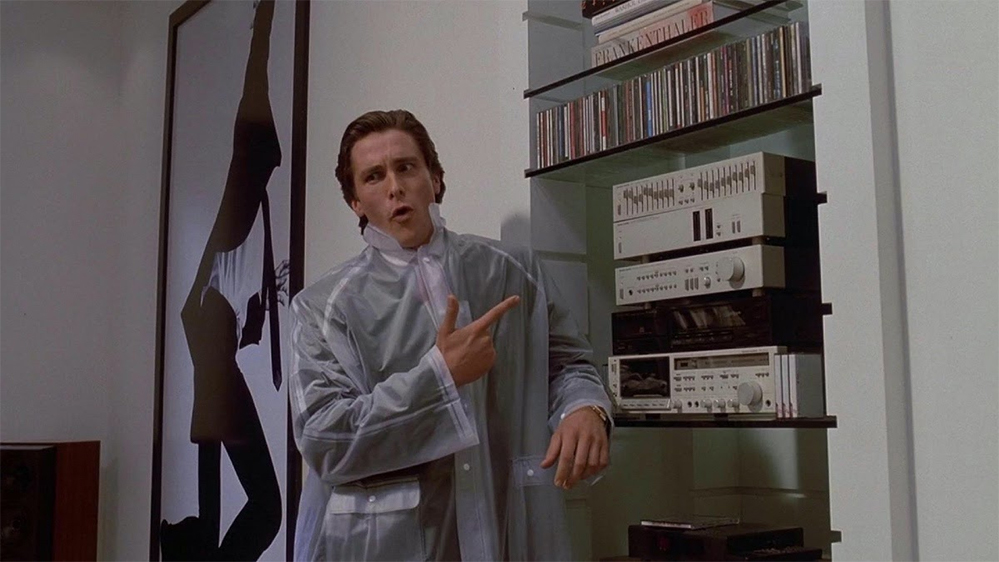 American Psycho was a very formative film for me. It helped to establish Christian Bale as my all-time-favorite actor, as well as my enjoyment of dark comedy and satire. It’s one of my quintessential movies I’d watch whenever they were airing on cable. And every single time was a blast.

Mary Harron’s cult masterpiece is specifically about the social issues of New York’s elite during the Reagan era. But 20 years after its original release, it holds up spectacularly well, because its core themes have acquired additional layers with the rise of new issues, as well as the ways old problems adapt to the contemporary age.

The film follows investment banking executive Patrick Bateman, who is loathsome for many reasons. He’s self-centered, casually misogynistic, patronizing in every single one of his interactions, and on top of everything, a murderer. And yet, Bateman is a fascinating figure to follow. First and foremost, the character works thanks to Christian Bale’s charismatic and incisive performance. Whenever he’s socializing with other people, Bateman is confident and cocky, trying a little too hard to be the coolest guy in the room. But whenever he’s alone in his apartment or the shadowy streets of New York City, he can’t help but contact with his insecurity: the engine of every decision he makes. Bale also has a blast delivering the dialog where Bateman explains 80s pop music to an encyclopedic degree. He uses those lines to establish Bateman as a man who knows how to use his reptilian appeal and intelligence to get people inside his deadly traps.

The other key factor to the success of American Psycho as a character study is Mary Harron, who always makes sure to keep Bateman’s misogyny and classism at the center. Every scene where he kills a woman or a poor person, the film’s humorous edge takes a step back to highlight Bateman’s slow decay into uncontrollable madness. The stakes of the film rely on his fragile capacity to keep his worst tendencies on check.

In the era of social media, the story of a man who carefully curates a persona for the public and uses it to mask his darkest secrets finds a new relevance that makes it even more rich than it already was. To put things into perspective, the Lifetime/Netflix hit series You serves as a great companion piece to American Psycho, since it tackles many of the same themes, but in a social media world driven by fundamentally millennial anxieties. Patrick Bateman and You’s protagonist Joe Goldberg are both very skilled at socializing and stalking for information, which they later use to harm people and gain some personal benefit. The more individuals they have in their social circle, the more power they have to execute their disturbing schemes. And they constantly pull off mental gymnastics to pretend the aforementioned schemes are justifiable in some way.

Despite its delightfully twisted sense of humor, American Psycho is a quite poignant story. Bateman may have been rich, successful, handsome and socially savvy. However, all his tangible possessions could never make up for the fact that he was leading a hollow and inconsequential life. All of his relationships were strictly pragmatic and superficial. Rather than being driven by appreciation or love, Bateman saw people as a means to climb the elite ladder. American Psycho asks how far are we willing to go for the sake of an image and a series of irrational social standards, and if the price is ultimately worth it.

Bateman’s tragedy is intensified by the fact that the world where he lives is just as shallow as he is. No one cares to associate faces with names, or to pay attention to the problems happening around them. Everyone can name each other’s favorite restaurant or fashion designer, but nobody is aware of what makes people in their respective social circle tick. The ambiguous ending highlights this point in a brilliant fashion. It’s the type of narrative beat that pays off in revisits, since it gives new meanings to the entirety of the story. Was Bateman imagining everything to make up for how bored he was, or was everyone else too apathetic to notice his atrocities?

American Psycho is one of those films that I like progressively more with time. Its surface-level qualities, like the snappy dialog, elegant cinematography, agile pacing and pitch perfect musical choices make it a fun experience. Most importantly, it’s the type of period piece that is both a commentary of the time it portrays, as well as one that works for the decades that followed.