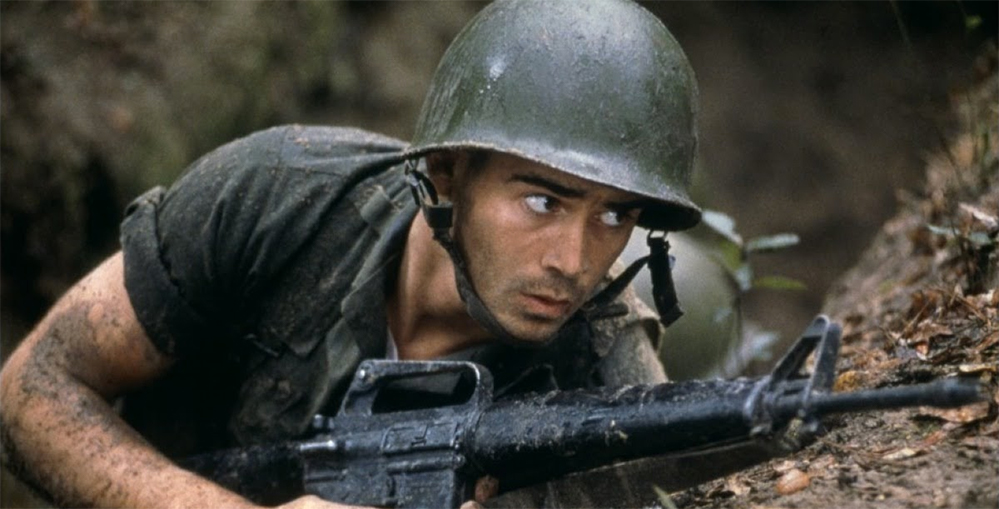 Joel Schumacher had a knack for colorful and bombastic direction. But he was a versatile artist, and could approach  radically different angles if he wanted to. The military drama Tigerland is not only a good example of this, but one of his most successfully realized efforts.

When the film begins, the most striking aspect is the raw documentary-like cinematography by Matthew Libatique. It’s a style that helps to emphasize the brutality and loneliness inside the boot camp where the story takes place, as well as to not fall into the jingoism that’s so common in films about the Armed Forces. It grabs you as a viewer and pulls you right there with the soldiers, making things like dirt, water or blood feel immediate and worrisome. Schumacher and Libatique’s approach gets maximum emotional impact by prioritizing shots that are close to the characters over the size and scope of the boot camp.

Tigerland takes us to the military microcosmos right when America was about to lose the Vietnam war, which makes everyone there desperate in one way or another. The recruits going through their training try to come to terms with death being in such close proximity, and their commanders double down on psychological and physical abuse in a misguided attempt to make the Army stronger. Enter Private Roland Bozz, who was drafted into service and decides to resist the cruelty and injustice that he and his fellow recruits are submitted to. Not to mention the idea of fighting a war on the verge of failure. Bozz’s capacity for empathy, leadership, and detecting loopholes to evade military service turn him into an idol of sorts in the camp. At the same time, the authorities become frustrated because they think he has everything it takes to be a good soldier, but is wasting his potential on spreading disorder.

Even though Tigerland is not an action film, Schumacher displays solid craftsmanship in the most physical scenes, like fistfights or the exercises the soldiers are punished with. There’s a messiness to them that makes them feel natural, as well as clear landmarks for the escalation the characters go through. Some of these men amplify their worst tendencies, while others become more worried about things getting too out of hand. The soldiers are being trained with a psychological war in order to endure a political one.

One of the smartest choices not only in Tigerland, but in Schumacher’s entire filmography, is the casting of Colin Farrell as Bozz. Farrell’s movie star charisma is the key to buy Bozz as a natural, but doubtful leader fighting to keep his mental sanity in a place that wants to break him. You perfectly understand why he becomes an inspiration for the more noble soldiers in the boot camp, as well as an issue for the authority figures who only know how to command by using threats and violence. Farrell also provides a quiet dignity to show that Bozz isn’t quite as strong as he’s perceived. That he uses his charm to hide the fact that he’s barely holding himself together. Because the moment he displays vulnerability is the moment his enemies win. Farrell makes absolutely clear you don’t want to be where Bozz is, but his presence makes you feel as safe as the soldiers he helps.

The other standout performance comes from Shea Whigham as the menacing, but pathetic Private Wilson: a man so insecure that he develops a need to attack and dismiss Bozz at any chance he gets. What makes Wilson work as an antagonist is his lack of discipline, which renders him virtually limitless when it comes to the methods he uses to get his way.

For all the grit and barbarity, Schumacher always made sure to keep Tigerland’s heart in the theme of endurance by hope. By the end, the fate of Bozz is left to the imagination. He could have died in the war, or fulfilled his dream of going to Mexico. But the key idea is that his presence was a healthy influence in a place designed to dehumanize men. That even in the worst circumstances, we can make space for meaningful bonds and memories that can make ourselves, as well as others, better.