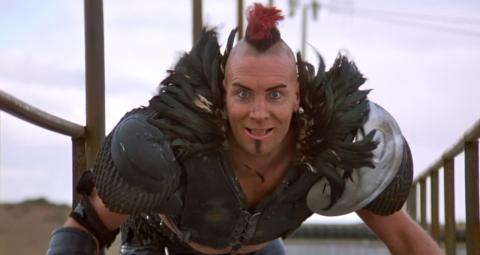 We at Lewton Bus are proud to yet again be co-presenting 1UPtown, an evening of games and cinema with The Museum of Art and Digital Entertainment (aka the MADE), the largest all-playable museum of console games in the world. For the past several months we’ve been bringing in movies and the games associated with them. Thus far, we’ve mostly brought in games and the movies inspired by them, such as the Van Damme Street Fighter, but this month we’re shaking things up a bit. Instead, we’re bringing in one of my favorite movies of all time: George Miller’s 1981 action masterpiece, Mad Max 2: The Road Warrior.

In the close to forty years since its release, The Road Warrior has had a huge influence on cinema, pretty much defining our understanding of what “post-apocalyptic” means, sounds, and looks like. This extends to other media as well, so we’ll be bringing in a murderers row of post-apocalyptic and vehicular combat-centered console games for everyone to play while they sip on their wonderful themed cocktails1 and watch awesome scrap metal hot rods smashing into each other.

If you’re going to be in the Bay Area this Saturday evening, swing by the Uptown Nightclub and join us! It should be fun and it will benefit a good cause!

OFF THE BEATEN PATH: WATCH DOGS Previous
Review: US Next