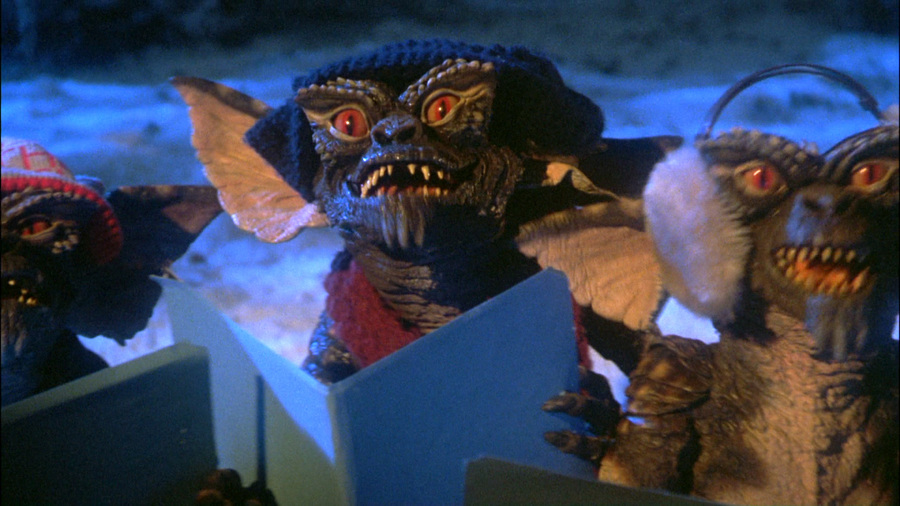 Cheery occasions like holidays and birthdays, featuring family-friendly stuff such as candy and sentimental music and clowns, are about as easy a setting for mean-spirited horror as you can imagine. Put a bunch of happy kids in a room tearing through packages to get at their Ninjago sets, then set loose an unwashed Santa Clause with a hatchet and boom: instant horror scenario that crosses all sorts of lines by swinging blades at children. It doesn’t take much effort to hit a low bar with this; it’s pretty fail-proof.

So when I talk about Christmas horror stuff, I’m mostly dealing with films that heavily rely on that easy trope, the dissonance between celebration and bloody murder. These films mostly aim pretty low, and that’s cool; they set out to ruin Christmas with machetes and gore and that’s enough for me.

Bob Clark’s fun, grisly Yuletide murder yarn predates Halloween and Friday the 13th by several years. If you are under the illusion that the slasher film and its tropes started with Carpenter, it’s startling to see a whole mess of the killer’s-eye handheld camera technique for which Carpenter was later applauded. Neither of them invented these techniques in a vacuum –Michael Powell’s career-destroying masterpiece Peeping Tom put a camera right behind the murder weapon. Italian murder mysteries, or “Giallos,” had long relied on stalking characters, taking their psychos’ points of view. But, Black Christmas took all of these techniques and singlehandedly created the modern holiday slasher. We owe it a lot.

It’s a ton of fun. Margot Kidder, pre Lois Lane, is delightful as a strong-willed sorority girl who never lets a cigarette go to waste. The story sets up an archetype of that beloved trope: the killer is inside the house! There are some grisly images here involving suffocation, webby attics, and of course, bright Christmas decor put to gruesome use. I also need to call out its innovative score, mostly recordings of abused piano strings. It is atonal and disturbing.

This one is a minor classic. Seek it out.

(The 2006 remake by the Final Destination Team has some pleasing disembowelings and the like, but is a badly written and performed mess. Avoid.)

Charles Sellier’s trashy wonder coined the murderous Santa thing. Every time you see a guy in a Santa hat doing terrible things to people, this is where it started. (The new SyFy adaptation of Grant Morrison’s Happy! runs with this as well.)

The story is perfunctory and dumb, of course. A disturbed orphan whose family was murdered on you’ll-never-guess-what-day is raised by some fucked up nuns and, as an adult (Robert Brian Wilson), discovers that hacking up motherfuckers in a Santa costume is the ticket to his mental health. So he’s Batman, basically, but with Santa instead of a bat. Throw in an ear-splitting electronic soundtrack and bargain production values and you have an unassailable trash classic.

Also, Silent Night, Deadly Night 5 features Mickey Rooney as a demented toy maker. Sometimes I feel that we are not worthy of such gifts.

How do I work this gizmo

Joe Dante’s surprisingly mean-spirited monster comedy is universally adored for good reason. A well-meaning but wildly inept inventor (Hoyt Axton) gifts his comics-drawing son (Zach Galligan) with a mystical little furball that he bought from a junk shop in Chinatown, because of course you can walk into any random Chinese junk shop and buy an ancient demon species. Duh. The critter’s name is Gizmo, of course – like me, you’ve probably named cats after him. Shit quickly happens and Gizmo births a platoon of mean little fuckers with sharp teeth and ropey muscles who give no damns about anything more than breaking stuff and hurting other living creatures. They’re republicans, basically.

Gremlins is low-grade camp with delightfully arbitrary plotting that benefitted hugely from production support from Steven Spielberg. This bought it a classy Goldsmith score and a well-wrought suburban our-town – Spielberg loves to terrorize cute American everytowns, and Dante had the means to pull it off convincingly. The monster effects in Gremlins are legendary–those little guys are amazing puppets with articulated everythings and loads of goop and viscera. This film blows up a gremlin in a microwave. Emphasis mine.

Originally (better) titled Safe Neighborhood, Chris Peckover’s Better Watch Out is a recent love letter to the genre and goes all in with the joyous / murderous dissonance. A vaguely creepy pubescent boy Luke (Levi Miller) and his vaguely creepy pubescent buddy Garrett (Ed Oxenbould) are at Luke’s home with his babysitter Ashley (Olivia DeJonge). Luke has a vaguely creepy crush on Ashley. Someone begins to invade and terrorize the house, and a twisty bloody romp ensues.

They are literally watching out at this moment

If it sounds like Home Alone but with a lot of stabbing and killing and stuff, that’s no accident; a character name-checks that terrible, inexplicably revered holiday film, which I sort of love–Better Watch Out knows its own legacy. It’s funny and absurdly indulgent of holiday imagery and music. The soundtrack blasts Christmas standards, the House is overloaded with colorful light, and the yard is a winter wonderland of twinkling trees. I love this angle, all the merriment and peace of Christmas but with vicious child-endangerment.

Another recent one, this is in some ways comparable to Gremlins–as silly as it is, it is surprisingly elegant. It is a low budget semi-anthology that aims high and mostly delivers. This film isn’t as well known as Krampus (which I do like a lot), but it has its own big fun Krampus and all manner of wicked elves and Christmas critters. Its cast is really well directed; at no point do the performances or really the film itself let us know that they are in on the joke. It’s legitimately suspenseful. Also this is an actual still of the DJ, as all anthology films now feature ongoing voiceovers from DJ characters:

And to all a terrifying night!