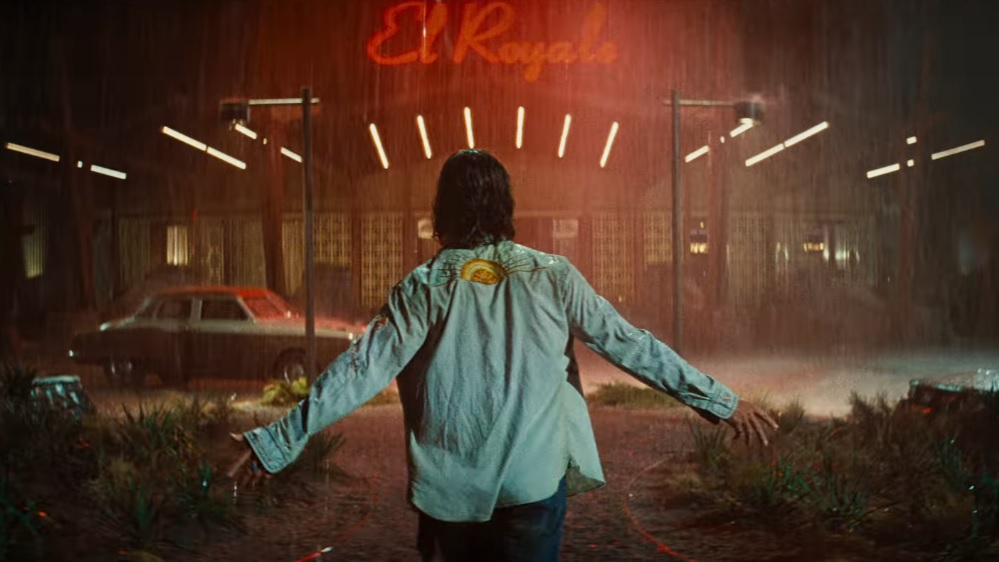 Two films into Drew Goddard’s directorial career, I now feel that I can conclude what it is about the cinema that intrigues him the most: the act of watching. Goddard seems to regard movies as an act of voyeurism, but less in that kinky weird De Palma way and more in this grand interlocking metafictional way. He’s interested in the looking-glass of stories, the way the camera regards its characters, the way we see them go about their lives. He’s interested in what the audience is getting out of it, and in the sense of remove that comes with it.

In short, Drew Goddard is fascinated by the lie of cinema.

In his directorial debut, 2012’s blast of a meta horror-comedy The Cabin in the Woods, this manifested in a few ways. We saw the characters being watched and manipulated into fulfilling horror movie tropes by a Director and her crew, seeking to placate the cosmic entities that control us all. In addition, one room in the cabin literally has a one-way mirror, thus allowing even the characters stuck in the horror film contraption a peek behind the curtain. That film also shines a light on the necessity that the characters choose their own fates of doom. After all, what is a movie that has no conflict? The characters must dictate the story, or there is no story there at all.

And now, six years and a couple of aborted projects later, Goddard returns with Bad Times at the El Royale. And wouldn’t you know it, but he returns to many of those same ideas he introduced in Cabin, but he comes at them in a completely different way. After all, he’s not making a horror-comedy anymore. This is a sprawling, post-Tarantino crime epic, complete with overlapping chronologies, flipped perspectives, and a few extra one-way mirrors for good measure. And one thing is clear: all is not as it seems.

It’s best to go into Bad Times at the El Royale knowing as little as possible, so I’ll be brief: In 1969, events transpire to bring a group of strangers together at the El Royale, a hotel whose claim to fame that it is split right down the middle at the border of California and Nevada. These characters include Jeff Bridges’ kindly priest, Jon Hamm’s gregarious vacuum cleaner salesman, Dakota Johnson’s withdrawn Southern criminal and Cynthia Erivo’s struggling singer. However, as we quickly learn, none of these characters are quite who they sell themselves to be at first, and they’ve all got some degree of an interior life that they’re keeping from one another, and those same lives and their troubles are what brought them together. From there, the movie sets out through a series of vignettes, going room by room and showing us who everyone is, how they got there, and what they do after checking in. These vignettes also often overlap, and what we learn in one might evolve into a whole new ballgame once we get into the next one and see the scene from a different character’s perspective. And don’t even get me started on the other hidden secrets in the hotel (which I am trying to be as vague as possible about so as to not spoil). In nearly every scene, we get multiple perspectives, different angles from which to see how the story is unfolding. It very much feels like Goddard is riffing on Pulp Fiction in some ways, and while I’d say it’s debatable how successful he is at unfolding his series of twists, it’s certainly fun to watch him try to stack all this stuff on top of each other.

And that’s before Goddard starts tipping his hand to what he’s really doing in his metanarrative. At one point, a character intones “Let’s have ourselves an allegory,” just in case you weren’t getting it. In addition, Goddard even finds time for his own version of Pulp Fiction’s glowing briefcase, taking it to decidedly different ends, and with implications that I’m still unpacking even now. Frankly, I’m sort of shocked that Goddard even managed to get this film made. At 140 minutes, it definitely plays long, and the endless volley of twists will probably come off to some as unearned and for the sake of it. There are little indulgences peppered along the way that, to some, might become maddening. It feels aggressively anti-mainstream in its approach and is ludicrously ambitious for a major studio genre picture in 2018.

The cast, for the most part, does well. Bridges is doing the same mumbly antihero schtick he’s been peddling since Rooster Cogburn, but he’s Jeff Bridges so it’s okay. Hamm does well in two kinds of roles: Slimy Hamm and Dopey Hamm, and I’ll leave it to the film to show you which kind he’s doing here. Most of the rest of the cast is fine, but there are two specific standouts. Chris Hemsworth is brilliant in every frame as a psychotic cult leader whose surfer bro geniality masks both his genuine menace and what an utter fraud he is under all the pomp and circumstance. But this is Cynthia Erivo’s movie, and her sad, singing Darlene Sweet is pretty much the closest the movie comes to having a central protagonist. Erivo’s singing voice is hauntingly beautiful, and her performance imbues Darlene with a steely resolve. Even once Hemsworth’s charisma takes over, Erivo is not engulfed by him. Seamus McGarvey’s cinematography is sumptuous and captures the movie’s gorgeous period production design, and Michael Giacchino has a lot of fun with his period-appropriate score in between all of the movie’s well-deployed needle drops.

I’m not sure what else I can say about Bad Times at the El Royale, besides telling you that it’s a flawed, messy, ambitious monster of a thing that demands to be seen. It doesn’t give the immediate joy that The Cabin in the Woods did, and its approach is far more scattershot, so I imagine that it won’t be nearly as rapturously received by most. But it’s an interesting beast, and in a studio landscape often dominated by safe bets, something as weird and messy and ambitious as this deserves all the attention it can get.

Review: A STAR IS BORN Previous
Review: 22 JULY Next