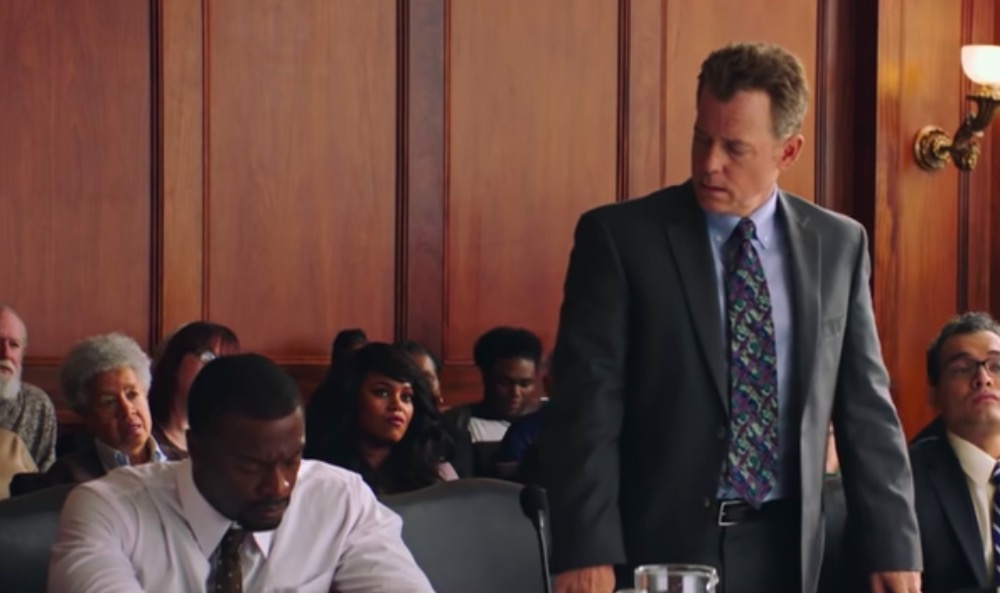 The true story of Brian Banks is a harrowing example of the broken justice system in the United States. It’s a story of how being black, poor and naive can, and has, destroyed the lives of countless men and women. How a kid who has his entire life ahead of him, including an almost guaranteed multi-million dollar football career, can be destroyed merely by accusation and the bang of a gavel. There are a million different ways to tell this story in an interesting, enlightened manner, which makes it such a shame that Brian Banks is an uninspired mess of cliches and failed attempts at poignancy.

For those unaware, Banks was a high school football player falsely accused of rape at 16 who wound up serving six years plus probation for his “crime.” This was all due to the fear of a white jury and pressure from an attorney who failed to adequately represent him, compounded by a judge denying the request for leniency after Banks accepted a plea deal that was supposed to avoid jail time. Banks served his time in prison but struggled to regain his life, unable to work or play college football due to the restrictions put upon parolees and registered sex offenders. He eventually attained representation from the California Innocence Project and fought his conviction, but only achieved his freedom after his accuser admitted to lying on tape. The film follows Banks’s story, with Aldis Hodge playing the man himself and Greg Kinnear portraying Justin Brooks, the head of the California Innocence Project.

Admittedly, Brian Banks has a very difficult tightrope to walk in the age of #MeToo, given the subject matter. To the surprise of no one, however, Tom Shadyac (Bruce/Evan Almighty, Liar Liar, Ace Ventura, The Nutty Professor… need I say more?) is not the director to successfully find that necessary balance. Brian’s accuser is portrayed as a cringe-inducing, walking stereotype and is only depicted in the most unflattering light, as is her money-grubbing mother who serves to antagonize Brian’s similarly one-note mom. The pair are basically just greedy, ignorant mustache-twirling villains from the start, failing to register as anything more than one dimensional. Exacerbating the issue is the seemingly calculated inclusion of a character who befriends Brian who had been sexually assaulted but wasn’t believed by the police, which is a note that rings not only hollow but sour. It feels like nothing more than a studio note to try and deflect any accusations or criticisms that the film is anti-#MeToo.1

That hollowness is pervasive throughout the film, with “the system is broken” being the extent of the depth the film brings to Banks’s story. For a film that feels like it stops dead every five minutes to provide a lengthy, didactic monologue, it says very little. Compounding all of this is Shadyac’s roots as a comedy director needling its way into the film, undercutting many of the film’s emotional beats with an ironic distance that prevents them from truly landing. Major moments and entire monologues are capped off with hackneyed punchlines and reactions that just serve to undermine the film and its attempts to move the audience.

It’s probably unfair to compare Brian Banks to Barry Jenkins’s If Beale Street Could Talk—Shadyac is no Jenkins and Banks screenwriter Doug Atchison is no James Baldwin—but given their similarities it’s almost impossible not to. Where Jenkins’s film is filled with empathy and grace, Brian Banks is almost garishly lacking in either. Those moments in Beale Street of calm and elegance where Jenkins’ camera closes in on the characters faces in order to show everything while saying nothing are replaced here by the pounding of fists, characters visibly trembling or making other overly-theatrical decisions, and the ever-tiring trope of hallucinations in prison. There’s a complete lack of any sort of subtlety in the film, causing it to just clunkily putter along.

Brian Banks teases a compelling legal drama at times — one that actually does break down the struggles and injustices of “the system, ”but there’s no real interest in doing the legwork to accomplish that. Instead, the film always takes the cheap way around any issue via sweeping, teary eyed speech that changes the hearts and minds of the characters on the receiving end. Failing at the adage of “Show don’t tell,” this is a film where we’re told that the story is inspirational on multiple occasions without the audience ever being given a real reason to feel that way. Frankly, Brian Banks is a distastefully loud film and Banks and his story deserved better.

Recollections of a Former Scene Kid: brokeNCYDE Previous
Review: SCARY STORIES TO TELL IN THE DARK Next